In Risk, Power and Inequality in the 21st Century, Dean Curran offers a reassessment of the relationship between risk and inequality, drawing on such examples as the 2008 financial crisis and climate change to show how class is integral to better understanding risk society. While the book could explore modalities of inequality – such as race and gender – in more detail, this is a rigorous text that responds to the formative work of Ulrich Beck to offer a valuable new contribution to theorisations of risk today, finds Ben Vincent.

For those lacking familiarity, possibly the most prolific social theoriser of the concept of risk was Ulrich Beck, who passed away in 2015. Dean Curran’s work, Risk, Power and Inequality in the 21st Century, ultimately aims to take Beck’s concept of ‘risk society’ and rework it – contrary to Beck himself and many of his critics – in order to demonstrate that socially produced risks are exacerbating inequalities, particularly those understood through the lens of class. Two particular (and very different) examples of risks and their outcomes are chosen, contrasting environmental and financial risks: namely, the ever-burgeoning impact of climate change and the 2008 financial crisis.

The book’s structure is intelligent and well-rounded, with the relatively equally-sized chapters reminding me strongly of the organisation of a doctoral thesis. In addition to his introduction and conclusion, Curran’s five core chapters respectively concern indispensable facets of the overarching subject: ‘the sociology of risk, risk society, class analysis, environmental risk and financial risk’ (15-16). To briefly summarise, the first of these main chapters performs an accessible review of the sociological literature on risk, subdivided to address core differential approaches. These are Mary Douglas’s cultural theory of risk, approaches utilising a Foucauldian notion of governmentality, systems theory and, finally, Beck’s risk society. The depth of this chapter impressed, and gave a feeling of engaging with a ‘risk reader’ rather than a monograph.

The final third of this opening chapter differed in turning to questions of ontology and epistemology in relation to how risk and inequality are conceived. Curran argues that (critical) realism cannot be eliminated from an understanding of risk. This aspect of the analysis agrees with Beck that ‘risks must in some sense be external to social understanding of them’ (38, emphasis original); it is argued that this is necessary for an analysis of risk to contain possible errors of understanding, which can further compound the impact of risks. 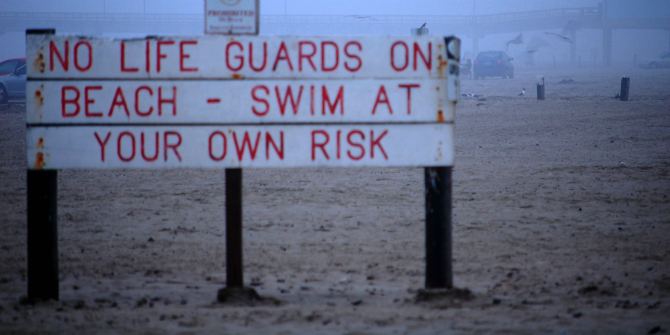 The second core chapter is where Curran reconceptualises risk society, doing so in a manner informed by critical realism and also Nancy Cartwright’s ‘dappled world’ approach. Upon reflection, for the structure to move from a consideration of the literature (ending with Beck), to an argument about realism, to the redeployment of Beck’s concept and then back to realism in a less abstract conceptualisation, may have benefitted from reorganisation. However, such structural scrutiny may lean towards pedantry. Appreciating Curran’s reworking of risk society is easier and clearer when deployed in relation to discrete examples, as in Chapters Five and Six, where the impacts of climate change and financial instability on those with less capital (as broadly conceptualised by Pierre Bourdieu) are rigorously unpacked.

Chapter Four stands out as the most removed from the overall enterprise of the monograph. The chapter demonstrates the necessity of recognising the contributions of Marxist, Weberian and Bourdieusian interventions to contemporary theorisations of class (and, correspondingly, inequality). This does not conceive of a Grand Unified Theory of class, but rather avoids employing one framework and forsaking the possible insights of others. Likewise, it avoids the potential criticism of having unjustifiably chosen a framework that most easily allows for the desired conclusions to be accommodated, which Curran charges Beck with doing. Within his introduction, Curran specifies that this chapter intends to build upon the Capitals, Assets and Resources (CARs) approach, as articulated by Mike Savage, Alan Warde and Fiona Devine. This, together with the concept of ‘the distribution of bads’ – the opposite of ‘goods’, in that bads have negative value or impact to consumers – in the following chapter on climate change felt, comparatively speaking, conceptually less accessible to the uninitiated reader.

Curran acknowledges consistently throughout that his analysis is heavily indebted to Beck, yet the centrality of Beck’s risk society to the text does not read as sycophantic. The departures and modifications Curran makes – most notably from Beck’s claim that the increasing relevance of risk will diminish or erase class difference, but also from Beck’s de-emphasis of gradations of risk – can resonate with other critics of Beck. Yet in his conclusion, Curran clearly demonstrates his originality in reiterating that ‘critics have accepted Beck’s framing of the problem – that class solely needs to be shown to continue to be important’ (141). This example does not do justice to the clarity of Curran’s intervention. By challenging Beck without presupposing a directly oppositional standpoint, Curran avoids throwing the baby out with the bathwater and makes a strong claim to an original contribution.

Whilst certainly most useful for sociologists with an existent grounding in the sociology of risk and Beck’s output in particular, Curran’s iterative style renders his arguments broadly accessible to those outside of his sub-field. My biggest gripe in terms of both accessibility and style was the occasional tendency to drop in unnecessary and obscure latinisms such as ‘sub specie aeternitatis’ or ‘pro tanto’, which detracted from otherwise clear passages. I was also slightly disappointed that the (perhaps astonishing) breadth implied by the title was considerably tightened by the deployment of terms. It is a difficult feat to so deftly collect so much of the scholarship on the sociology of risk when different authors will inevitably deploy the term to represent different (and differentiable) phenomena. The discussion centred on the work of Knight and Keynes, on the epistemology of risk (91-95), was a particular highlight.

Whilst it is utterly understandable that Curran does not attempt to accommodate all notions of inequality, or even other major loci of inequality such as race or gender, more attention could be given to the caveats of exactly how Curran’s theory speaks to specific modalities of ‘risk-class’, rather than other phenomena that structure inequality. Despite not being a scholar of risk specifically, I nonetheless recognised and enjoyed the rigour of this work. That Beck himself said to Curran in personal correspondence that Curran was going ‘with Beck beyond Beck’ (158) should underscore this work’s scholastic excellence.

Ben Vincent recently completed a Doctorate at the Center for Interdisciplinary Gender Studies at the University of Leeds. Their research examined non-binary gender identity negotiations in the contexts of queer communities and medical practice. Their interests particularly nucleate around gender, sexuality and the sociology of health and illness.