In Breaking the WTO: How Emerging Powers Disrupted the Neoliberal Project, Kristen Hopewell argues that the active pursuit of their own interests by emerging powers leads neo-liberalism into stalemate. Using the World Trade Organisation (WTO) as an example, the book not only illustrates a power shift, but also that the demands of emerging powers embracing the existing rules make consensus harder to reach. Yao Han appreciates the bold and innovative interpretations of the power interactions behind the WTO offered by this work. 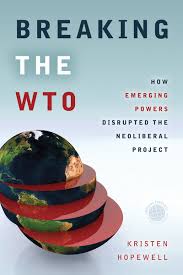 The world is undergoing changes resulting from a power shift. In her new book, Breaking the WTO: How Emerging Powers Disrupted the Neoliberal Project, Kristen Hopewell evaluates the impact of this on global economic governance, with a focus on the World Trade Organisation (WTO).

Based on solid empirical research – fifteen months of field research at the WTO across various countries, 157 interviews with varieties of stakeholders, more than 300 hours of ethnographic observation and extensive document analysis – the author vividly reveals the power politics behind the WTO. Each major player is like a character in a novel: readers can feel their desires, their uneasiness and their hopes, be attracted by the power interactions among them and also wonder what the future of the whole will be.

At the very beginning of the book, Hopewell poses her argument: the breakdown of the core institutions of the neoliberal global economic order is caused by the wider acceptance of its norms, principles and institutional arrangements by the emerging powers. It is an explanation and also an enigma, leading the reader to discover the shift away from US-led multilateral economic governance through the growing demands of the emerging powers and the resulting stalemate at the WTO.

What is the origin of the WTO and what has it been? It is a multilateral trading system intended to progressively liberalise trade through successive rounds of negotiations. Its birth signified the beginning of an institution-building project. It is expected to be always going forward like a bicycle; if not, it may topple over. For a long time since the post-1945 period, the WTO (and its former incarnation, the General Agreement on Trades and Tariffs [GATT]) has been an instrument of US hegemony and that of other dominant states, reinforcing and enhancing their power by expanding markets for its goods and capital.

And what is the current WTO? It is still an instrument; however, the lack of a dominant power has resulted from a power shift. Both developed countries and emerging powers are seeking to make use of it for their own interests. Although emerging powers try to speak on behalf of other developing countries, they are criticised due to the lack of representativeness. Besides, there are significant divisions within the developed countries and also within the emerging powers. The negotiations thus come to stalemate as there is no hegemony to ‘force’ an agreement to be reached. 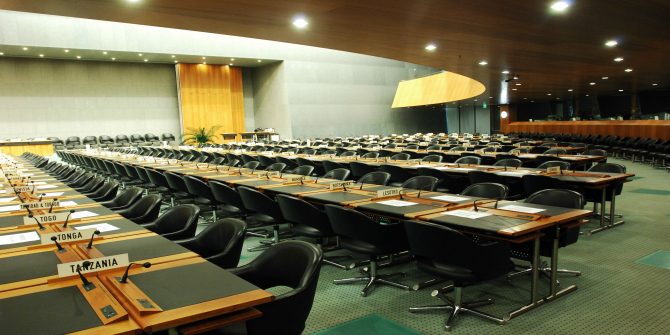 The book caused me to wonder: if it is agreed that the WTO de facto reflects mostly American interests in the era of US hegemony, it can be expected that the USA has gained most under the WTO. However, the current stalemate in the Doha negotiations may not have been anticipated by the USA. Besides, Hopewell also points out that the US support for free trade has been highly selective. In the Doha Round, the USA expected expanding agricultural liberalisation in the European Union and Japan. Meanwhile, agriculture subsidies in the USA and other rich countries became a prime target, though subsidised agriculture in developed countries might benefit poor countries dependent on importing food from them. On the one hand, the stalemate in the negotiations poses a question for development models: why does agriculture develop more successfully in Brazil than in India and China? Why do service industries boom in India? Why are products manufactured in China? Since the liberalisation process has resulted in the fast development of emerging countries such as Brazil, India and China, should the USA and other rich countries expect similar gains?

On the other hand, why are the countries that have developed and gained from liberalisation now pushing the liberalisation process outwards? Hopewell offers her sharp observations on the core interests of the emerging powers. Currently, the advantages and expectations of Brazil lie in its agricultural exports; India in services exports; and China in manufacture exports. Brazil in its alliances with India has criticised the agriculture subsidies in developed countries. Both India and China have a significant portion of their populations employed in agriculture, and both also have defensive concerns in this field. However, there is some water in the agricultural tariffs of India, while there is very little in those of China since the latter was required to reduce its tariffs and nontariff barriers with its WTO accession. Hence, under pressure from the tariff reduction formula on the table in the Doha Round demanding China to further open its agriculture market, China joined India and the developing country coalitions to secure flexibilities, though it was dragged into the inner circle originally supposed to support developed countries.

Hopewell points out that the power interactions leading to the stalemate reflect essentially a mercantilist struggle. The WTO negotiations are designed to have members agree on packages, allowing them to sacrifice ‘losses’ in some areas for ‘gains’ in others. The stalemate of the Doha Round suggests that inter-country relations cannot be accommodated.

Furthermore, it means heterogeneous interests within countries cannot be accommodated. For example, the service industries in India demand concessions from the USA and EU to allow more workers to work temporarily in their markets, even though the offer was eventually restricted to skilled workers instead of low-skilled workers. It is clear that such policies would be welcomed by professionals. But it may not be an area that the majority of Indian people would wish to stick to.

When interests cannot be accommodated through multilateral trading negotiations, will such protectionism result in economic depression or even war as it did in World War II? Not necessarily for the moment. It is noted by Hopewell that we are currently witnessing a transformation period where the integrated institutional structures under US hegemony – the International Monetary Fund (IMF), World Bank and GATT/WTO – are being challenged, while bilateral and regional trade and investment agreements proliferate among countries despite the halt in the multilateral negotiations at the WTO.

In all, Breaking the WTO assesses the impact of the power shift on the global economic governance order. Revealing the political interactions behind the WTO negotiations helps promote understanding of the impact of this on the power politics at play in trading negotiations. It creates the opportunity for the actors fully occupied with calculations of their own self-interest to have a look at the balance sheets of others, which may assist actors to know where to compromise and reach consensus in negotiations. It also calls for researchers to undertake further global studies with a view to finding out the pareto improvement.

Yao Han is a PhD Candidate in School of Politics and International Relations at the University College Dublin and a PhD researcher in Geary Institute for Public Policy at the University College Dublin. Her doctoral research focuses on international trade and conflict embedded in networks. She is currently a Visiting Research Fellow at the Hebrew University of Jerusalem. She wishes to thank Dr Rosemary Deller for her edit. Twitter: @hanyao_sara. Read more by Yao Han.