Written in the early 1970s by renowned anthropologist Marilyn Strathern, the manuscript for Before and After Gender: Sexual Mythologies of Everyday Life has remained in storage for four decades. Published in 2016 with an accompanying afterword by Judith Butler, this book is now available to read for the first time. Mari Valdur welcomes the opportunity to embark on this challenging and rewarding journey into Strathern’s critical interrogation of the mythologies of sex and gender that still shape everyday life.

Before and After Gender: Sexual Mythologies of Everyday Life. Marilyn Strathern. HAU Books. 2016. 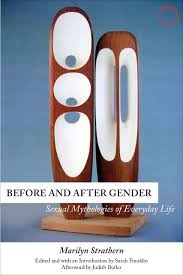 Before and After Gender: Sexual Mythologies of Everyday Life urges the reader to create a context not only for Marilyn Strathern’s method of analysis using extensive ethnographic and literary materials, but also for the fact that the book was written between 1973-74 but only published in 2016. Strathern is one of the most influential anthropologists of our time, whose significance extends well beyond the discipline. Besides her work on gender, Melanesian and feminist anthropology, she has made an important contribution to research on auditing and accountability, intellectual and cultural property as well as bioethics. Differing from standard approaches, challenging and extremely rewarding, Before and After Gender has perhaps been most missed by anthropologists, sociologists and anyone interested in literary, gender and women’s studies.

This book positions itself between Strathern’s classics: her early works, which pioneered bringing women into ethnography, and The Gender of the Gift (1988). The manuscript had been intended as part of a series for which the publisher had set a task of drawing on a range of textual sources and engaging with audiences beyond the specialist; unfortunately, the whole project was to be abandoned shortly after. Before and After Gender provides examples from a rich array of literature: from Margaret Mead’s Sex and Temperament in Three Primitive Societies (1935) and Male and Female (1949) to the thirteenth-century poem The Thrush and the Nightingale. The reader needs both to trust Strathern in her unfolding arguments while keeping an alert and clear mind, not fully slipping into the pages-long carefully selected quotes from other texts as the author shifts between and overlaps different contexts, bodies of work and her own thought. It could therefore be speculated as to whether the writing of Before and After Gender pushed Strathern towards developing her comparative method, present in its full form in The Gender of the Gift, which has since inspired generations of analysis.

At the time of writing, Strathern resided in Port Moresby in today’s Papua New Guinea, a country in the Melanesian region that has not only produced numerous seminal works besides Strathern’s own, but could be seen as the cradle of social anthropology more broadly. However, rather than through geography, the sense of the ‘afar’ reveals itself in Strathern’s work as scale. Martin Holbraad and Morten Axel Pedersen (2009) have gone as far as to call Marilyn Strathern’s ‘intense abstraction’ ‘Planet M’.

The manuscript of Before and After Gender was contemporaneous to the rise of feminism and the emergence of gender studies. Previously a grammatical category, ‘gender’ became a mainstream term in the social sciences to address the constructed as distinct from the biologically determined ‘sex’ in the early 1970s, owing to works by Margaret Mead and sexologist John Money. It was in Ann Oakley’s Sex, Gender and Society in 1972 that Strathern encountered ‘gender’; prior to this, as she points out in her interview with Alan MacFarlane (2014), ‘one talked in terms of sex roles or relations between the sexes’. In this legacy video recording, discussing her conceptualisations, Strathern reminds us that the focus should not lie with definitions but rather with the particular problem that the concept addresses. Although not explicitly stated in the book, Before and After Gender was written in reaction to the anthropological and feminist categorisations of the time, the dualisms and ‘Western’ emic conceptualisations that were expanded to universals. 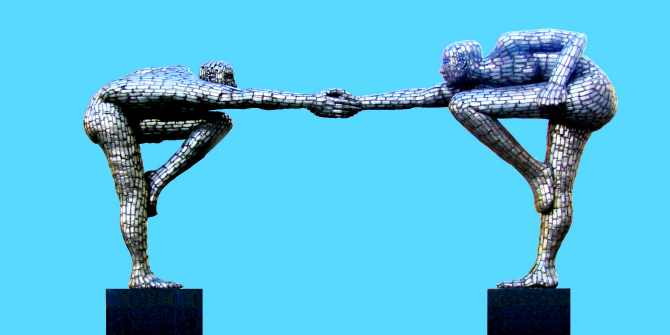 For this reason Strathern’s attitude toward ‘gender’ remains somewhat negative in this volume: ‘At the present, the idea of sex and gender is providing a potent focus for the individual/society problem […] Pull it up for its poisonous or medicinal properties, and you find the root has human form’ (276). And: ‘Again let me stress that a prime achievement of sexual mythologies is to produce out of men and women discrete social categories, two kinds of beings, males and females. This is gender’ (282).

What she strives for instead is ‘gender not only as a relation, or as a representation of relations, but as a layering of both and more so we can see how the complex mechanisms of gender model social apparatus as a whole, not just as a part’, as Sarah Franklin puts it in the book’s introduction (xli). The first two chapters of the book provide background to Strathern’s main argument: ‘the many ways in which people think about interactions between sexes, and the many ways this interaction is used to talk about, becomes an idiom, for other things’ (7): namely, a symbol that is shown to manifest itself in different forms throughout the book.

One such symbol appears in the chapter ‘Sex and the Concept of the Person’. Basing her discussion on George Gissing’s The Odd Woman (1893) and David Schneider’s The Story of an African Farm (1883), among other works, Strathern shows how erotic/coital relations are ‘a central symbol in terms of which the male-female relationship as such is thought about’ (207). Here relationships, marriage in particular, are looked at as negotiations of inequality, sexual/erotic relationships, domesticity and personal freedom as well as love, perhaps. The experience of being female against being a free person is rather representative of ‘the woman question’: the heated debates on women’s roles and rights that gained momentum in the second half of the nineteenth century.

Furthermore, drawing on these novels, Strathern shows how the concept of ‘personhood’ in the European tradition is closely bound up with the notion of rights, but that this is not a universal association (196). A somewhat parallel discussion extends from her quoting of Simone de Beauvoir’s The Second Sex (1972) where myth is described as being created by man, the Absolute Subject, for whom woman is essentially a sexual being, the Other, who comes into being only in reference to him (32). Strathern moves on to discuss ‘stereotypes’, understood as the everyday expressions of gender-thinking (34), pointing out that de Beauvoir’s focus on personal freedom and analysis is rooted in the European epistemologies of morality, free will and individuality.

Also basing her multiple arguments in Before and After Gender comparatively on Melanesian material, the themes raised here later reached their culmination in The Gender of the Gift, where Strathern famously writes:

Far from being regarded as unique entities, Melanesian persons are as dividually as they are individually conceived. They contain a generalized sociality within. Indeed, persons are frequently constructed as the plural and composite site of the relationships that produced them. The singular person can be imagined as a social microcosm (1988, 13).

Gender remains not a possession but rather a verb for Strathern. It tends to slip away from any tangible form. Perhaps here it is worth looking at Strathern’s work as arising from the Melanesian context and not as the ‘Planet M’ of anthropological ontology. What is at stake, as Judith Butler concludes in the book’s afterword, is not only how the terrain of social relations is perceived, but also how this gives rise to the making of the social world so that enabling and informing it are our contentious and common task (302). Strathern does not see this as irrelevant, but believes that the making or unmaking of something is possible only when that something is properly indicated (276). Yet, while she does not question that the symbols she discusses have real effects, she does not seem awfully interested in their very real content. For instance, in her take on the liberation movement, she looks at ‘victimization’ processes linked to debates on common humanity, individualism and equal rights (287), but less at the bruises on women’s bodies, which may perhaps have faded into the making of the flawed universal ‘gender’, but nonetheless being culturally specific and real, require both attention and the tools for this.

In Before and After Gender, Strathern sought to challenge accepted conceptual frames. I join both Franklin and Butler in suggesting that Strathern, as usual, succeeded. Her arguments presented are still relevant today, and the precision, determination, intellectual independence and creativity with which she proceeded in these are timeless. This makes Before and After Gender indeed a worthwhile journey, one that has been a long time coming and is finally available to be embarked on.

Mari Valdur is a PhD student at the University of Helsinki, Social Anthropology. Her interests include temporality, spatiality, medical anthropology and ethnographic methodologies. Read more by Mari Valdur.

Posted In: Australasia and Pacific | Britain and Ireland | Gender and Sexuality | History | Sociology/Anthropology