In Citizenship in Question: Evidentiary Birthright and Statelessness, editors Benjamin N. Lawrance and Jacqueline Stevens bring together contributors to explore how contemporary citizenship is inseparable from its paper trail. By exploring the documented manifestations through which citizenship is both awarded and denied, this sophisticated and wide-ranging volume contributes to understanding the exclusionary practices and inequalities of current citizenship regimes around the world, finds Kalathmika Natarajan. 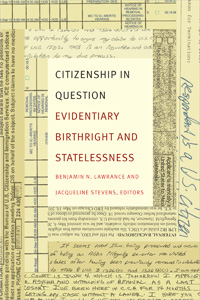 A growing literature on citizenship and migration has focused on the inherent inequalities and exclusionary practices of citizenship regimes as well as the state’s exclusive power as the arbitrar of citizenship, defining who ‘belongs’ to the body politic. Citizenship in Question: Evidentiary Birthright and Statelessness, edited by Benjamin N Lawrance and Jacqueline Stevens, is a remarkable contribution that both adds to scholarship on citizenship and challenges some of the inherent assumptions that underpin citizenship studies by questioning the ways in which they often ignore the burden of proof: that is, can you be a citizen if you do not have the ‘right’ documentary evidence to prove it?

This deceptively simple question ties together the chapters in the book and provides for critical analysis of the evidentiary bases of citizenship that lead to states questioning the status of their own citizens. Citizenship is thus inseparable from its paper trail: complex registration procedures, birth certificates, identification cards, passports and other paraphernalia through which citizenship is administered or denied. In this reading, citizenship is tied to its documentary manifestations: a scenario where ‘only after one is expected to have a piece of paper can one be judged for not having it’ (4).

Based on a symposium held at Boston in 2012, the chapters draw on the experiences of scholars ‘outside academia’ to help those whose citizenship status has been in doubt, and it also includes the compelling account of one such wrongfully deported US citizen, Johann ‘Ace’ Francis. The chapters are grouped in terms of their focus on, first, how existing international and regional protocols on citizenship and statelessness produce ineffective citizenship; second, the bureaucratic negotiation of citizenship by officials who are directly involved in administering and determining citizens; and third, the politics and legislative manifestations of the citizen/alien paradox.

By critically surveying the prevalence of jus solis (birthright citizenship) in the Americas – often considered a more liberal citizenship regime – Polly J. Price analyses how supposedly inclusive rules of citizenship and international treaties still produce ‘effective statelessness’ due to poor documentation and intentional discrimination. This puts focus on the ‘proof’ that legitimates the rights of citizens, as Jacqueline Bhabha also shows in her work on the ‘legalized illegality’ of the Roma community in Europe, who often do not have the birth certificates and other documents deemed mandatory by the ‘citizenship tool kit’ (46).

Kamal Sadiq similarly analyses the cases of India and Malaysia to reveal the significance of state artefacts of citizenship, the ‘jus charta/tabulae’, without which legal categories of jus solis and jus sanguinis (citizenship by descent) are meaningless. For those that cannot generate the information sought by the state to satisfy its criteria of identification, (proof of) citizenship remains out of reach.

Moreover, the burden of proof rests not only on the case of proving citizenship but also of proving statelessness. Drawing on his experience as expert witness in the UK in cases involving the statelessness claims of African migrants, Lawrance describes their struggle to document and prove their statelessness in order to access protections offered to refugees.

Chapters also call attention to the colonial, racialised and gendered dimensions of unequal citizenship and its documentary regimes. Sara L. Friedman shows the ways in which travel documents for those crossing zones of contested sovereignty between Taiwan and China replicate the political uncertainty of the status of Taiwan. She is excellent in documenting the affective lives of these documents: not just for the border-crossing Chinese spouses of Taiwanese citizens, but also for the bureaucrats whose (unfulfilled) sense of longing to stamp a Chinese passport manifests the larger desire to assert Taiwan’s sovereignty.

Kim Rubenstein draws on her experiences as pro bono counsel to Amos Ame, a Papuan Australian who was stripped of his Australian citizenship after Papua New Guinea’s independence. Despite being born in Australia, the High Court did not consider him a ‘real’ Australian citizen and argued that he had held a ‘flawed’ (105), ‘largely nominal’ status. Although there is scope for more detail – particularly on the colonial and postcolonial complexity of ‘British subject’ status – this chapter is notable for its focus on the colonial and racial foundations of conceptions of citizenship.

Several chapters also effectively demonstrate the arbitrariness of designating citizenship, including the affective decisions taken by judges and other officials. Far from the imagined realm of bureaucratic rationality, these processes are, despite popular assumptions, neither ‘neutral’ nor ‘rational’. Amanda Flaim investigates the statelessness of highlander populations in Thailand who, despite ostensibly providing evidence, have often not been granted Thai citizenship since they do not fit the ‘internalized national fantasies of the officials making these determinations’ (163) Beatrice McKenzie also powerfully demonstrates the ways in which the racial and gendered considerations of individual bureaucrats dictate the granting of US citizenship, while Rachel E. Rosenbloom demonstrates the racialised evidentiary processes negotiated by those on the ‘margins of citizenship’ (133) by focusing on the denial of passport applications of Mexican Americans in the US-Mexico borderlands. Rosenbloom makes an important contribution by highlighting the oft-ignored domestic politics of the passport: one process through which the government designates citizenship status and regulates mobility.

There is also some focus on the politics of citizenship as a means of questioning the legitimacy of politicians. Margaret D. Stock studies proposals to redefine US birthright citizenship – borne out of the notorious questioning of the American-ness of President Barack Obama – to show how this would exclude more ‘insiders’ than ‘outsiders’ (including past presidents and Republican presidential candidates). Alfred Babo reveals a more stark example in the Ivory Coast’s policy of ‘ivoirité, or ‘national authenticity’, put forth by President Bédié to discredit and eliminate political opponents by declaring them ‘foreign’.

Stevens, drawing on Franz Kafka and Jacques Derrida, provides perhaps the most outstanding intervention in the volume by exploring instances of the US government detaining and deporting its own citizens. By treating these episodes as ‘apologues’ which affirm the authority of the state and its documents and reiterate the inevitability of the struggles to establish citizenship, Stevens shows how written records of the government – even when wrong – remain privileged over biographical details drawn from memory and oral testimony.

While several chapters in the volume talk of the complexity of the legal mechanisms and evidentiary processes of establishing citizenship, it is perhaps worth asking what this complexity itself means. Is the complexity of citizenship, with its legalese and unintelligible jargon, itself not a mark of the state? Is such complexity not an assertion of state control and legal authority, beyond the logics of belonging asserted by its people? As Daniel Kanstroom optimistically notes in the afterword, perhaps the solution lies not in making citizenship more easily available, but in making human rights protections available to non-citizens.

This sophisticated and wide-ranging volume is essential reading for not only those interested in citizenship, bureaucracy and the state, but also for a wider, non-academic audience.

Kalathmika Natarajan is a PhD Fellow at the University of Copenhagen. Her doctoral research examines the British-Indian diplomatic relationship after Empire (1947-62) as a negotiation of entangled citizenship claims and racialised limits to postcolonial mobility encountered by the Indian migrant.