This updated edition of The Rohingyas: Inside Myanmar’s Genocide, authored by Azeem Ibrahim, aims to draw further attention to the ongoing atrocities being committed against the Rohingyas in Myanmar and to challenge some of the overarching myths that lie behind the persecutions. While she would have welcomed a deeper engagement with the legal components of the situation from the perspective of international law, Ebru Demir recommends this as a welcome contribution to the literature that will give readers insight into the historical roots of the crisis. 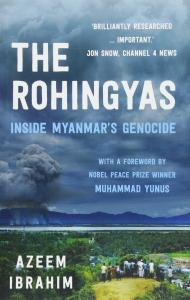 The publication of an updated version of Azeem Ibrahim’s book, The Rohingyas: Inside Myanmar’s Genocide, is very timely considering the current situation in Myanmar. Ibrahim has written his book with a clear purpose: to draw the world’s attention to the ongoing atrocities. Within the text, the urgency of the situation is constantly underlined, and the international community is repeatedly urged to take steps to intervene and stop the violence. At the start of 2018, international actors have stepped in, resulting in an agreement between Bangladesh and Myanmar to start repatriating refugees. Yet, having read Ibrahim’s book, this seems unlikely to address the root causes of the situation and to guarantee non-repetition for the victims.

The book chronicles the events leading up to the current atrocities: readers gain insight into the origins and causes of the persecutions against the Rohingyas, an ethnic minority group living in Rakhine province in western Myanmar. Although there are many other ethnic minorities in Myanmar, why is it that the Rohingyas are specifically subjected to the denial of their freedom of movement, eviction campaigns, controls over family size, forced labour, expulsion from their lands and property, violence and torture?

According to Myanmar’s extremists (including some Buddhist monks and the military regime), the Rohingyas came to the region after 1824, which was the year when British colonisers arrived in what was then called Burma. Today, citizenship is still linked to this narrative, and is given to those whose ancestors were deemed to have lived in Myanmar before 1824. It is believed that the Rohingyas were ethnic Bengalis who arrived in the region because of British influence; since they were pro-British, they were the ones who were given employment in the colonial service and administrative structures. In the book, however, Ibrahim challenges this narrative by presenting official documents dating back to colonial era that prove that the Rohingyas were already living in the country before the arrival of the British. Although it is insignificant under international law as to where distant ancestors originated from when deciding citizenship, this point is nonetheless crucial for illustrating how the nationalist discourse both leads to, and is based on, the distortion of historical facts. Ibrahim’s work is therefore especially important in challenging some of the myths surrounding Myanmar and the Rohingya crisis. Another of these is that the Rohingyas have not been denied citizenship or their fundamental rights since the independence of Myanmar in 1948. Between 1948 and 1962, Ibrahim acknowledges that there were some positive steps taken by the Myanmar government: the Rohingyas were treated like any other ethnic group and even had a small number of seats in parliament. However, during the period of military rule of 1962-88, the situation changed and direct persecution began.

Ibrahim explains this shift as part of the economic disaster experienced by the country at that time. According to the author, the military regime was failing to sustain socialism, resulting in economic crisis. As a result:

the regime needed an easily identifiable group it could victimise and against which it could construct wider discrimination. The Rohingyas fitted this role. They were unarmed, ethnically easily identifiable, spoke a non-Burmese language and were Muslims in a country where 90 percent of the population was Buddhist (53).

This shows that while the Rohingyas have not been in a position of permanent ostracism, their circumstances have been deeply connected with those of the country as a whole.

So can we believe that a democratic about-turn will solve the problems of this minority group? The answer is no, and this is another myth which Ibrahim challenges. The revised and updated edition under review here gives an insight into the period after the 2015 elections: ‘the first free polls in the country in decades and […] widely seen as fair’ (144). They were won by (Nobel Peace Prize winner) Aung San Suu Kyi’s National League for Democracy (NLD). But has the situation become better after the elections? Unfortunately not. Rather, atrocities have worsened. When we particularly consider the fact that all Muslims were removed from the candidate lists before these elections, we can see one of the reasons behind the failure. Thus, the situation in Myanmar offers another example that shows that democracy should not mean or be regarded as equal to elections only.

The title of the book is very clearly based on the argument that what is happening in Myanmar now is genocide. However, the actual language used in the book is more cautious, for example: ‘The charge in this book is that Myanmar now stands on the brink of genocide’ (100, emphasis added); ‘the situation in Rakhine can be described as almost a text-book case of pre-genocide’ (110, emphasis added); and ‘the book has argued that Myanmar stands on the edge of genocide’ (139, emphasis added). This discourse, scattered throughout the book, creates some inconsistency with the title.

In addition, the book has a standalone section entitled ‘Genocide and International Law’. The main argument of the book is linguistically shaped around a potential genocide, and therefore this section raises one’s expectations in terms of finding a legal analysis of the situation from the perspective of international law. However, this part remains firmly descriptive. Ibrahim discusses other genocides in history in order to illustrate the similarities with the case at hand. Yet, instead of this, more interviews from the field and depictions of the specific circumstances in Myanmar would likely have given greater insight and an opportunity to present further concrete evidence to establish the key component of genocide, ‘genocidal intent’.

All in all, the book is a very welcome contribution to the current literature on Myanmar. It enables readers to comprehend what is happening in the country today and the historical roots of atrocities in the region. As explained at the beginning of this review, the main goal of the book is to draw attention to the Rohingya crisis. In this revised version, Ibrahim makes it clear that an urgent step is needed from the international community. Since the Rohingyas are becoming more and more isolated, new extremist actors within the Rohingyas are emerging: such as the Arakan Rohingya Salvation Army (ARSA), which carried out attacks in 2016 and 2017. Aung San Suu Kyi’s NLD and the Myanmar military claim that ARSA has links with Al-Qaeda and/or the Islamic State. There is no doubt that their actions have ostensibly given more ‘rationalisation’ and ‘legitimacy’ to the Myanmar military to continue the atrocities. The recent agreement between Bangladesh and Myanmar regarding the repatriation of the Rohingyas sounds like a solution. However, readers of the book will understand that ‘repatriation only’ is unlikely to enable the Rohingyas to be given dignified and equal citizenship upon returning home, if they have a home remaining.