In Enduring Time, Lisa Baraitser offers a generous and expansive rumination on experiences of time’s suspension – delaying, waiting, repeating, persisting – that attends to their potential capacity to offer conditions for political action. This is a thought-provoking and stirring engagement with living the elongated present, writes Ryan Ross, that will contribute to emergent debates on temporality across the humanities. 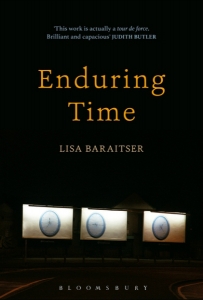 Lisa Baraitser’s Enduring Time opens with a quotation from the poet and philosopher Denise Riley, who, in Time Lived, Without Its Flow (2012), wrote of how her experience of time felt ‘suspended’ or ‘arrested’ following the death of her adult son. As Baraitser explains, time for Riley was no longer ‘a line with direction or purpose but a pool, the welling up of present time that [would] not pass’ (1). It is such temporal experiences that are the focus of Enduring Time. Baraitser’s interest is in events that resist or frustrate the regular flow of time, as in Riley’s account of bereavement. The remit of Enduring Time is generous and expansive, implicating a seemingly limitless range of temporal tropes: delaying, waiting, repeating, persisting. But Baraitser offers not merely a philosophical rumination on time’s suspension, but also an intervention that seeks to create, however partially, conditions for political action, too.

Enduring Time is composed of eight chapters, each of which focus on a particular temporal trope as refracted through a case study of Baraitser’s own eclectic taste. The first chapter explores how certain ideas and concepts ‘stay’ within the context of academic disciplines. Borrowing from Michel Serres, Baraitser reads discipline formation not as a linear development, but as temporally folded – a process, that is, of placing old and new events side-by-side, of using the new to reanimate the old or imbue it with fresh meaning. Baraitser develops this point through a reading of Judith Butler’s The Psychic Life of Power (1997), arguing that Butler was able to revitalise otherwise passé ideas around the unconscious through her engagement with Sigmund Freud and Michel Foucault. Baraitser’s reading of Butler stresses the need to move away from thinking of time in linear terms, of assuming that disciplines develop and become more sophisticated through time (with any attempt by that discipline to re-use old ideas thereby automatically dismissed). Rather, Baraitser pushes for a conception of discipline formation that thinks of ideas and concepts as lying dormant until such a point that they become useful – of appreciating, in other words, the value of ideas or concepts that ‘stay’ within certain disciplines.

Baraitser’s discussion is engaging and often thought-provoking, and Enduring Time makes reference to an impressive catalogue of academic scholarship. Some early chapters do suffer from what feels like a lot of exposition, however. For example, Chapter Two focuses on the time of maintenance, with a discussion of two artists whom Baraitser identifies as illustrating this temporal mode (social artist Mierle Laderman Ukeles and photographer Richard Billingham). Yet much context is needed to fully appreciate how these artists feed into Enduring Time’s broader discussion, with the effect that the conclusion to Baraitser’s treatment of maintenance, the philosophical pay-off to the chapter, feels somewhat brief. A similar problem affects the third chapter. It focuses on the time of repetition, with reference to experiences of motherhood. But much of the chapter is devoted to outlining the writings of literary critic Lee Edelman. Baraitser’s rich insights feel lost in the discussion.

Thankfully, these issues do not fatally upend the message of Enduring Time, for each of the book’s chapters function independently of one another, offering not an interlocking or confined reflection on time’s suspension, but a series of open-ended, porous readings. The benefit of this approach is apparent in Chapters Four and Five. Experiences of delay are the focus of the former, where Baraitser undertakes a critical reading of Luisa Passerini’s pioneering oral history of 1968, Autobiography of a Generation (1996). By borrowing from psychoanalysis, particularly Freud’s concept of nachträglichkeit (meaning deferred or retro-action), Baraitser is able to produce a highly textured reading of delay, of how certain events only take on significance retroactively: for example, Passerini’s interviewees were only able to locate themselves within the political agitation of 1968 some two decades later, when Passerini began interviewing them. Through this, Baraitser begins to posit intergenerational delay as a mode of doing politics, an attachment to a political event that becomes the foundation of political self-identity.

As is explored in Chapter Five of Enduring Time, however, becoming temporally stuck is not always one’s choice. Baraitser focuses on the experience of Herman Wallace, a political prisoner and Black Panther who spent over 40 years in solitary confinement; his correspondence with the artist Jackie Sumell during part of this led to The House That Herman Built, an ongoing art project where Wallace designed his dream home, which Sumell subsequently created through various installations. Baraitser reads the project in two ways: both as a means by which Sumell drew attention to Wallace’s plight, thereby laying the foundation for political action, but also, through the documentation of the political symbolism and influences implicated in Wallace’s design, as preserving Wallace’s political commitment and analysis of political change.

It is through this discussion of Wallace and Sumell, as with the earlier reading of Passerini, that Baraitser’s political ambitions for Enduring Time are best realised. As she explains in the book’s introduction, one of her interests is in understanding how we can work to transcend experiences of time’s suspension, to politicise and democratise time and the institutions that reinforce particular temporal configurations. One way of doing so is acknowledging how temporal experiences can be shared: the sixth chapter of Enduring Time considers this issue, centring on the recollection of a mother’s memory as prompted by an engagement with her daughter, the artist Barbara Loftus. The chapter following focuses on a body of work by the Brazilian artist and psychiatric in-patient Arthur ‘Bispo’ do Rosário, which Baraitser reads as a means of making present a form of time that has already elapsed or is still to come.

Bispo’s work is bound up in a practice of ‘care’, which Baraitser uses to posit a new relationship between the subject and time’s suspension. We are encouraged throughout Enduring Time to use time’s suspension not to lament the past or agitate for immediate change, but to live the elongated present, to undertake a process of ‘care without end’. Baraitser therefore eschews the espousal of an alternative temporal regime to extricate us from time’s suspension, and instead advocates for engagement with chronicity, concluding that it is ‘the only condition for newness, where newness is neither breach, rupture or flash, but a quiet noticing that something remains, which is the permanent capacity to begin again’ (188). It is a provocative and stirring conclusion to Enduring Time, and one that augers well for future debates on temporality within the humanities.

Posted In: Art, Lit and Film | Gender and Sexuality | Philosophy and Religion | Politics