In Vexy Thing: On Gender and Liberation, Imani Perry offers a powerful historical analysis of patriarchy and domination that draws on a plethora of philosophical, theoretical and artistic texts. Weaving together a unique tapestry to interrogate the structures of patriarchy and to reimagine liberation, this book should be on the shelf of any graduate student working in the fields of feminist and critical race theory, writes Katelan Dunn. 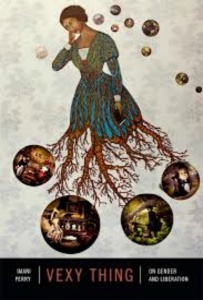 Vexy Thing: On Gender and Liberation is as much a unique literary tapestry drawing from a plethora of academic, philosophical, theoretical and artistic disciplines and thinkers as it is a powerful statement on patriarchy and domination in an era when we need to be reminded of it most. The book itself reads more as a conversation than a conventional academic text, but this certainly doesn’t exempt the reader from examining the ways in which they are themselves situated along lines of privilege, power and domination and how these work to oppress, marginalise and subjugate.

The title of the book, Vexy Thing, lays the groundwork to prepare individuals for transformative change in the lives and communities in which they live, since the term ‘to vex’ means to torment, to trouble, to upset, to question, to discuss and to debate. Author Imani Perry encourages us to commit to all of the above, as we untangle the term patriarchy: what it means; how it underpins societal values and ideologies; how it has been used as a tool of domination; and its connections to property, national sovereignty and personhood.

Examining how personhood, citizenship, sovereignty, law, art and property have shaped relations of power over the last few centuries and the ways in which patriarchy has normalised gender domination and oppression through the histories of imperialism, legislation and social and political mechanisms, we are also tasked with ‘investigating the historical and philosophical relation between the here and the there’. Yet, this invitation to reimagine, reread and rethink, while also simultaneously challenge both the status quo and a social order that has idealised patriarchy and shaped culture and beliefs, seems, at first, like an impossible task.

This is particularly exacerbated when we unearth ‘the naturalization of binary gender categories that were, and continue to be, applied to citizenries’ (21). While ‘anticolonial, civil rights, feminist and gay rights movements demanded major transformations in the social order of the dominant empire, the United States’ (10), we continue to see a human desire to categorise and organise who we and others are in relation to binary distinctions (male/female, white/non-white, citizen/non-citizen…). Perry argues that while:

gender liberation may not require the evacuation of all categories […] it does require us to imagine that each human being might be afforded access to embodying and experiencing and representing all of the beautiful traits we have ascribed according to gender, irrespective of the accidents of birth of body, the ascriptions of our cultures, or the decisions of identity (239).

The idea that ‘human organization be broad, improvisational, and appropriately contingent and open to change’ (239) is certainly a difficult undertaking, since much of our social organisation is premised on power and domination (who has it and who does not).

As a result, we are confronted with a number of questions in the book, including but not limited to: how might we avoid a structural repetition of the past and emancipate ourselves from the constraints of patriarchy? How do we fashion a new existence for ourselves: one that is inclusive and liberating to everyone without resorting to notions of domination? Who is counted and discounted? What happens to those who are located on the periphery, on the margins of society? Lastly, what would it take to bring people together ideologically, emotionally and structurally?

Perry addresses these questions, asserting that we can emancipate ourselves from the confines of patriarchal domination through myriad means including, firstly, empathic listening and nurturance. Both seem antithetical to the world in which we live, but this is precisely why both are needed in challenging relations of oppression and domination, while also reconfiguring who we are in the present and where we want to be. Such empathic listening requires a practised awareness to understand ourselves both independent of, and in relation to, others and their unique, subjective, lived experiences – in particular, how they have encountered injustice, privilege and relations of domination. This, in and of itself, is transformative, attentive, inclusive and deliberate. Such actions, Perry argues, will help radically transform how we think about ourselves, engage with others and both act and react in ways that have historically been rooted in hierarchies and unequal power relationships.

Secondly, Perry encourages us to use feminism as a verb. In other words, we are enticed to do feminism and feminist work, not just claim it. A transformative feminism is needed to tackle the injustices patriarchy presents and the ideologies and structures it underpins. This entails a critical understanding of how power and its unequal distribution impact us on a personal and collective level, consciousness-raising through community dialogue and transformative action to change current hierarchies on both micro and macro levels. By thinking critically about ‘the manner in which we are all seduced by the logic of patriarchy’ (250) and ‘confront(ing) the ways in which we are implicated in domination, even as we seek to undo it’ (253), we soon recognise that belief without action has no place in a social movement.

Third, Perry inspires the reader to be deliberate about their efforts in reading through forms of gender domination, while both critically interrogating and unpacking our historical and political past in an effort to understand where we are today as both individuals and as part of the collective movement. She writes: ‘Those of us who seek gender liberation ought to think of feminism as a critical reading reactive in which one ‘‘reads through these layers’’ of gendered forms of domination’ (9). This unearthing of ‘both the ‘‘old’’ and the ‘‘new’’ orders” (9) is especially imperative in the social and political landscape we find ourselves in today. By examining our historical past and current positionality, we are tasked with learning from our mistakes in an effort to put our best foot forward, so to speak, for our future selves. This goal is reminiscent of the wise words once spoken by Maya Angelou: ‘Do the best you can until you know better. Then when you know better, do better.’

Furthermore, reading as a reflective practice and praxis entails ‘disrupt(ing) the repetitive unconscious everyday life as readers’ (243), while recognising that the human story is not binary. This call for a ‘praxis of attentiveness to the bodies and lives of others that resists egotistical drift […and] without negating the uniqueness of one another’s trajectories’ (243) is a definite, deliberate and strong departure from relations of domination and power that have come to define a society premised on listening to respond and dominate versus listening to understand and learn.

Fourth, creative possibilities are explored, with the assertion that art can be both transformative and disruptive. One of the most salient examples offered in the book is that of Jennicet Gutiérrez, a Latina trans activist and one of the founders of Familia, a queer immigrants’ rights organisation, who disrupted a reception attended by former US President Barack Obama with a call for him to release members of the LGBT communities from detention centres. Although Gutiérrez was ultimately silenced and removed from the event, Perry argues that this disruption and interruption was a way to address the discrimination and sexual abuse LGBT people face while in the custody of US Immigration Customs and Enforcement (ICE), while also creatively breaking codes of civility, social order and decorum. Such acts work to make us think about our own positionality and privilege, while also enabling consciousness-raising and the cultivation of listening politics.

Lastly, Perry highlights the ethics of a curatorial life, where one can pick, hold and defend the elements that describe our reality and act as the very tools that can liberate us from the constraints of power, domination and patriarchy by thinking about ‘how we do and might act, how we survive, how we sustain in response to domination, and how we create’ (243). In imagining ‘gender possibilities that are not beholden to Western patriarchy, [we are able to] re-form and refigure’ (244). We see this shift already happening in the form of gender neutral washrooms, workplace policies that reinforce cultural sensitivity and language surrounding gender identity and expression and in the debut of non-binary driving licenses and birth certificates. Popular culture is also reflecting this shift with shows such as Transparent, Billions and Orange is the New Black, both featuring trans and non-binary actors and challenging the assumption that everyone should assimilate into binary gender categories.

By taking on historical figures and thinkers, including Friedrich Nietzsche, Michel Foucault, Thomas Hobbes, John Locke, Toni Morrison and Audre Lorde, Perry presents a feminist reading praxis that examines history, theory and academic scholarship to provide the basis for understanding how patriarchy informs our individual and collective selves. This book should be on the shelf of any graduate student working in the fields of feminist scholarship and critical race theory. Ultimately, while there is much work to do to dismantle ‘the patriarchy’, Perry’s literary contribution helps set the stage for interrogating its workings and reimagining what liberation could look like.