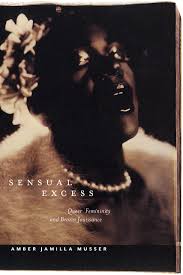 At the end of Sensual Excess: Queer Femininity and Brown Jouissance, Amber J. Musser, a professor and scholar of American Studies at George Washington University, concludes her book with this declaration: ‘an invitation to think with the flesh, with the sensual, is an invitation to make new knowledge and new politics’ (179). Throughout the book, Musser’s six chapters serve as evidence for the coda’s finale, which insists that queer femininity and brown jouissance serve as a fleshy mode of knowledge-making. Musser brings together interdisciplinary ideas from the fields of queer studies, gender studies, visual studies and performance theory to cover a great deal of theoretical and critical ground. She engages psychoanalytical theory, queer theory, feminist criticism, queer of color critique and Afro-pessimism to confront the tensions that arise in producing knowledge around black and brown bodies, specifically in regards to sexuality and gender. She also provides original examinations of art and media produced by some of the most innovative, and sometimes controversial, visual and media queer, feminist or queer feminine artists of the twentieth and twenty-first centuries.

As the opening chapter’s first page previews, with its inclusion of Lyle Ashton Harris’s luscious photographic capturing of black feminine visage Billie #21 as a starting point (also the book cover), Sensual Excess deviates from Musser’s prior work, Sensational Flesh: Race, Power and Masochism. Both books topically veer toward similar subject matter, sensation and flesh, but Sensual Excess presents a less masochistic perspective for its more compelling objects of study and its thesis on jouissance. Though Musser considers the violence of white supremacy and its dominance in controlling narratives that regulate, write and represent black and brown bodies and pleasure throughout the book, she also stays committed to ‘excess forms of embodiment […] central to what [she calls] brown jouissance. In contrast to an ecstasy that imagines transcending corporeality, brown jouissance is a reveling in fleshiness, its sensuous materiality that brings together pleasure and pain’ (3).

Not simply close readings of paintings, films, performances and visual installations produced by the likes of Judy Chicago, Kara Walker, Mickalene Thomas, Cheryl Dunye, Amber Hawk Swanson, Xandra Ibarra, Carrie Mae Weems, Nao Bustamante, Patty V. Chang and Maureen Catbagan, Musser also turns to theoretical frameworks such as José Esteban Muñoz’s ‘brown feeling’ and Nicole Fleetwood’s ‘excess flesh’ to inspire her work meant to expand our awareness of knowledge production that originates and is maintained by a rethinking of sensory experience. The introduction and its theoretical direction are inspired by Muñoz and Fleetwood, but the foundational path of the book is constructed from Hortense Spillers’s theory of pornotroping, Édouard Glissant’s ideas about opacity and, significantly, Jacques Lacan’s jouissance. 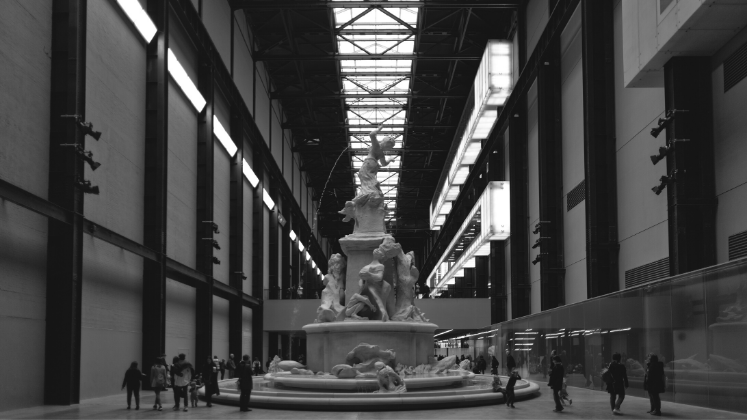 Race and gender, Musser insists, are also produced through affective technology and sensation of the flesh, as much as they are produced through the discursive registers of the signs held together by law and biopower. These competing orders of knowledge are placed in conversation with each other in each chapter. In Chapters One and Two, the objects of study include art, media and film that might be classified as illegible, pornographic or perverse for their artistic rendering of vulvas. Chapter One’s reading of the labia surpasses the canonised French feminist perspective of Luce Irigaray, while evolving readings of black femme anatomy beyond feminist critiques of the white gaze, objectification and the Hottentot Venus of the late twentieth century.

Delving into theories about consuming and consumption that are gustational, Musser offers performative theory that reads Judy Chicago’s The Dinner Party (1979) and Kara Walker’s A Subtlety (2014). Her analysis of both works leads to one of the more nuanced examinations of audience reception and response to Walker’s piece. Highlighting the tensions between desire and consumption, Musser nudges readers to challenge white supremacist tethering of sexuality to agency and sovereignty by asking readers to read Walker’s work via Lisa Lowe’s theory about political economies of intimacies. There is much to appreciate about the ways in which Musser broaches the instability of flesh, telling readers early on that such instability requires verbs where there have only been nouns.

In Chapter Two, Musser performs similar pleasurable feats with her close readings of tactility and opacity in Mickalene Thomas’s painting Origin of the Universe (2012). Excess flesh and excess surface are intertwined then reoriented via Audre Lorde’s lesbian feminist approaches to clitoral orgasms, tribadism, racial difference, self-love and masturbation. Chapter Three continues to engage lesbian feminism and queer of color critique (Cherri Moraga and Juana Rodriguez) alongside analysis of aesthetics and theme in Swanson and Ibarra’s Untitled Fucking (2013) to further develop her theory of brown jouissance. Such strategies enable Musser to then think with and against Julia Kristeva’s and Dareick Scott’s work on Oedipal complexes and abjection as she addresses filmmaker Dunye’s comedic sex film Mommy is Coming (2012) as representing a multiplication of jouissance that considers the intersections of race.

One of the text’s major strengths occurs in its ability to refuse and navigate a dominant black/white binary of critical theory and visual studies to read, discuss and dissect a diversity of forms and artists. Chapter Five, aptly titled ‘Weeping Machines’, examines automaticity’s challenge to emotional corporeality through examination of Bustamante’s video installation Neapolitan (2003) and Chang’s In Love (2001). Musser discusses emotional excess, or lack thereof, in minoritarian performances to explore how both artists’ innovations hinge on a looping of brown jouissance where sensation and temporality can be closely observed. Bustamante’s weeping performance and her comments linking that performance with cybernetics and sex are then discussed in relationship to Masters and Johnson’s technology-enhanced dildo Ulysses, which photo-captured responses that the sexologists could measure. Here, Musser shows what technology and aesthetics centred on the interior make possible in brown and white knowledge production. Alternately, Musser details how Chang’s In Love, centred on the fleshiness of the parental bond and the decision to run split-screen videos in reverse time, dismisses the normative inclination of assimilation for perversion. Musser sees Chang’s art installation as a critique of assimilation, noting that perceived or performed passivity in the model minority type becomes a mode of automaticity ‘symptomatic of an inability (or lack of desire) to maintain a self in the face of prevailing structures’ (135).

Overall, Musser’s Sensual Excess successfully demonstrates how the artists under consideration comprise a fleshy mode of knowledge-making that can also be seen as a mode of self-production and theorising gender and sexuality away from the biopolitical. In bringing such artists in conversation with discursive theories, Musser demonstrates why they should be relationally linked alongside and in conversation with discursive genealogies of gender and sexuality that do not account for racial difference.

L.H.Stallings is a Professor of African American Studies at Georgetown University. Most recently, she is the author of A Dirty South Manifesto: Sexual Resistance and Imagination in the New South (forthcoming University of California Press, December 2019).  She is also the author of Mutha’ is Half a Word!: Intersections of Folklore, Vernacular, Myth, and Queerness in Black Female Culture (Ohio State Univ. Press, 2007) and Funk the Erotic: Transaesthetics and Black Sexual Cultures (Univ. of Illinois Press, 2015). The latter has received the Alan Bray Memorial Award from the MLA GL/Q Caucus, the 2016 Emily Toth Award for Best Single Work by One or More Authors in Women’s Studies from the Popular Culture Studies Association/American Culture Association (PCA/ACA), and it was a 2016 Finalist for the 28th Annual Lambda Literary Awards for LGBTQ Studies.

Posted In: Gender and Sexuality | Media Studies | Philosophy and Religion | USA and Canada