In Archaeologists in Print: Publishing for the People, Amara Thornton explores the relationship between archaeologists, publishing houses and the British public’s understandings of antiquity in the late nineteenth and early twentieth centuries. Nicholas Barron recommends the book – available to download from UCL Press here – as a highly readable and detailed exploration of the institutional networks of archaeological knowledge production that will appeal to readers interested in the links between empire, tourism, science and publishing at the turn of the twentieth century. 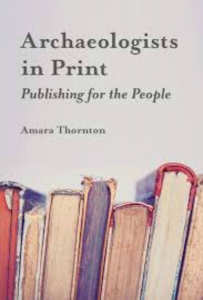 In Archaeologists in Print: Publishing for the People, Amara Thornton unpacks a largely underexplored area in the history of the social sciences – the relationship between archaeologists, publishing houses and public perceptions of the ancient past. Leveraging the archival holdings of several notable publishers, Thornton explores the variable ways in which archaeologists shaped the British’s public understanding of antiquity through the ‘scripting’ of archaeological labour during the late nineteenth and early twentieth centuries.

By scripting, Thornton refers to the process of ‘bringing the results of [archaeological] research to the attention of the wider public, where it was – and continues to be – boiled down and built up, cut and recast’ (1). The scripting of archaeology came in the form of radio broadcasts, photographs, memoirs and even fiction. However, the book primarily addresses the production of ‘subject-specific serialized compendiums’, published largely by non-academic presses with an extensive reach amongst the reading public (75, 95). Thornton argues that these scriptings, embedded within growing networks of empire and tourism, functioned as a significant means by which British reading audiences experienced North Africa and the Middle East. Equally interesting, these same texts conditioned people’s view of the quintessential archaeologist as a ‘free spirited international traveller, adaptable, adventurous and scientific’ (2-3).

To illustrate this history, Thornton begins with an overview of the training of archaeologists at the turn of the century as well as the central role of travel in the construction of archaeological knowledge. While Thornton employs a ‘deliberately loose’ definition of an archaeologist that includes ‘anyone studying or operating within archaeological contexts or working with remains of the human past’ (5), she is attentive to the more formal institutional paths by which individuals were funded and trained in this nascent field of inquiry. This includes excavation societies, governmental antiquities departments, museums and British universities (namely University College in London and the Universities of Liverpool, Oxford and Cambridge). Moreover, Thornton is cautious of the central role of British imperial expansion and the subsequent construction of circuits of tourism that necessitated a need for archaeological knowledge (32-34, 47). 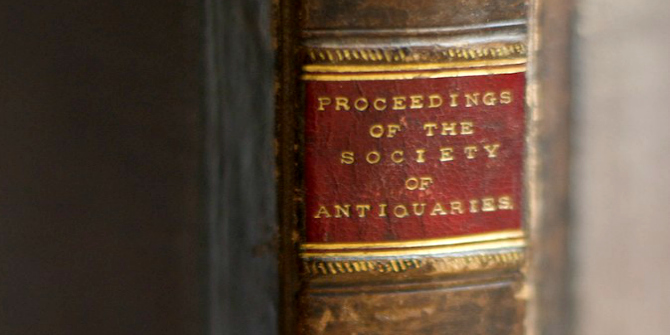 Image Credit: Crop of ‘_id_ Antiquaries’ by scienceatlife licensed under CC BY SA 2.0

In Chapter Three, Thornton turns to the experiences of various women archaeologists, exploring the ways in which archaeology, travel and publishing generated new avenues for women to ‘build visibility for themselves both within and outside the “professional” sphere’ (74). Chapters Four and Five delve more directly into the promotion, circulation and reception of archaeological knowledge through the production of relatively affordable compendiums on North Africa and the Middle East (95). Thornton identifies an interesting religious influence through organisations like the Religious Tract Society, an evangelical group founded in the eighteenth century, which supported the publishing of titles exploring Biblical lands with a ‘Christian tone’ (105).

With Chapters Six and Seven, the book probes specific publishing houses (John Murray; Macmillan and Company; and Penguin), their relationship with archaeologists as authors and the ways in which these relationships shaped the production and reception of archaeology in Britain at a particular moment in time. Penguin books with its nonfiction Pelican series emerges as a particularly successful attempt to build a larger audience for archaeologists and their writings (172, 178).  After a consideration of the ‘fictional field’ of spadework, wherein archaeologists and their experiences were funnelled through the genres of romance, horror/fantasy and crime (188), Thornton concludes with a brief mediation on the nature of publishing today. She observes that the need to present one’s work to the public has taken on a new form in the contemporary moment where novel technologies and the oppressive publishing expectations of the academy create new avenues of scripting archaeology outside of traditional academic presses (e.g. digital open access platforms) (212).

Thornton’s ability to marshal archival data and cultivate grounded interpretations makes for several interventions in the wide-ranging fields of history and science studies. With her detailed focus on the relationship between archaeologists and publishers, Thornton makes a vital contribution to an underexplored dimension of the history of archaeology/anthropology. Since the postmodern critiques of the 1980s, studies of the discipline have often focused on the history of methods and ideas, experiences of researchers in the field and the politics of writing. This has come at the expense of an examination of the more mundane means by which knowledge is materialised and distributed to the world. By taking an ‘in the round’ approach to the history of archaeology that uses the role of publishing as its anchor point, Thornton provides a more detailed view of the wider and politically-charged context in which archaeological knowledge made its way to a reading public (3). Additionally, Thornton helps identify the ways in which the professionalisation of archaeology occurred beyond the parameters of the university system. In various corners of the British empire at the intersections of museum collecting, tourism and a growing public fascination with the ancient and exotic, Archaeologists in Print details how archaeology began to develop as a discrete occupation both within and outside of academia.

One area that could benefit from further explication is the intriguing early assertion that archaeologists were seen as ‘dangerously exotic and semi-foreign (even quasi-anarchistic)’ (2-3). This point is most convincingly articulated in Thornton’s analysis of the fictional field, where the works of Agatha Christie and other novelists adopt archaeologists and digs as signifiers of the exotic. This would suggest a role for archaeological publishing in the construction of what Edward Said famously characterised as ‘a political vision of reality whose structure promoted the difference between the familiar (Europe, the West, “us”) and the strange (the Orient, the East, “them”)’ (Orientalism, 45-46). One then wonders about the broader political effects of these texts. Beyond framing understandings of the past, how might these books have participated in the construction and regulation of the borders between ‘us’ and ‘them’? How might these scripted imaginaries, born of imperial networks of power, have eventually looped back into the very systems that gave rise to them? Did they change them in the process? These lingering questions perhaps speak more to the generative nature of Thornton’s topic of research than a fault in her analysis, which is quite illuminating.

Regardless, Thornton has provided a highly readable and detailed exploration of the institutional networks of archaeological knowledge production at the turn of the twentieth century. Despite its regional and temporal specificity, Archaeologists in Print will appeal to a cross-disciplinary readership as both a pedagogical tool and research aid. The author’s exceptionally clear and cogent writing style makes for a highly digestible teaching tool at undergraduate and graduate level. Moreover, Thornton’s careful analysis of the intertwined issues of empire, tourism, science and publishing will be of interest to those conducting research within and across these fields of inquiry.

Nicholas Barron is a PhD Candidate in the Department of Anthropology at the University of New Mexico. His research interests include the history and sociology of science, historical anthropology and imperial/colonial studies. Funded by the University of New Mexico and Andrew W. Mellon Foundation, his doctoral research explores the co-production of anthropology and Indigenous politics in the US Southwest. Nicholas also serves as an editor for the History of Anthropology Newsletter.