Ethiopia and Eritrea have a rich tradition of historical writing. In Guardians of Tradition, James De Lorenzi demonstrates the admirable scholarship of both countries through a combination of exhaustive archival research, attentiveness to local and international contexts and historical theory. The early twentieth century’s unequal interactions between western scholars and their African counterparts still resonates today, writes Alex de Waal.

Guardians of the Tradition: Historians and Historical Writing in Ethiopia and Eritrea. James De Lorenzi. University of Rochester Press. 2018. 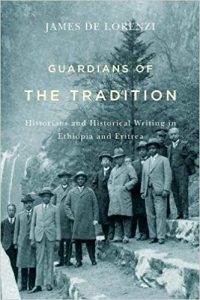 At the height of imperialism a century ago, European and North American social scientists and historians served as handmaidens to invasion and conquest at every level from the practical to the philosophical. The dividing lines between ethnography and military intelligence, and between history and racist propaganda, were thin and were routinely crossed. Public intellectuals in the emerging ‘Third World’, such as Rabindranath Tagore, Jamal al-Din al-Afghani and Ling Quichao, challenged Eurocentrism both on their own terms and by adopting and re-purposing the modernist analytical frameworks and disciplinary tools of the colonialists themselves.

While the challenge to Euro-universalism from the Middle East and Asia has been well documented, and the subaltern histories of the ‘black Atlantic’ have been explored, the Ethiopian experience and contribution have been relatively neglected. However, as James De Lorenzi’s book, Guardians of the Tradition, shows, Ethiopian public intellectuals of the early twentieth century made their own distinct contributions, which do not readily fit into the Asian or Atlantic anti-colonial traditions.

Ethiopia has the oldest literary tradition in sub-Saharan Africa and had a unique, and uniquely complex, colonial encounter. Between the Italian occupation of the Red Sea coast in 1882 and the Ethiopian victory at the Battle of Adwa in 1896, Ethiopians and Eritreans were compelled to deal with European imperialism and its transformative and terrifying reverberations. In the early twentieth century, one group of Ethiopian public intellectuals was energised to work in the service of the Imperial court, simultaneously modernising and celebrating the tradition, while others were caught in the embrace of the most rapidly industrialising colony on the continent.

De Lorenzi has produced a book of admirable scholarship; it combines exhaustive archival research, attentiveness to the local and international contexts and currents, lively personal biography and historical theory. It is also succinct.

The story of Ethiopian and Eritrean historical research and writing in the first half of the twentieth century that De Lorenzi tells is by means of three individuals. Each of them was a writer, a chronicler, compiler and translator, and each served as a public intellectual: a teacher, diplomat, journalist or publisher. Each was itinerant, travelling to Europe, the Middle East and as far as Japan. They transcended genres. But De Lorenzi’s focus is on their role as ‘homespun historians’ who straddled the vernacular and the international academy, implicitly or deliberately defining where Ethiopia and Eritrea stood in the contemporary world, and in the sweep of world history.

Heruy Wolde Selassie (1878–1938) was a scholar and diplomat in the Imperial service. Twice in his lifetime (1911 and 1927) he compiled a catalogue of Ge’ez and Amharic works, both published in manuscript form. This bibliographic endeavour provides De Lorenzi with an opportunity to open his book with comparative historiography of the rapidly developing corpus of Ethiopian writing over those decades. Heruy straddled many roles, among which was leading the Ethiopian delegation to Japan to make a trade agreement (see this photo from 1931).

At a ceremonial dinner, the Japanese and Ethiopians exchanged elaborate formal compliments and drew parallels between their respective Emperors, with their long lines of descent from the legendary Jimmu and Sheba. The Ethiopians – along with people facing European colonisation or already subjugated to it – admired Japan for its rapid modernisation symbolised by the spectacular victory over the Russian navy in 1905. Hosts and guests would have drawn parallels between the Battle of Tsushima and the Battle of Adwa. Heruy was Ethiopia’s foremost scholar, but he felt no need to contribute to international Ethiopian studies, which were conducted within the dominant Orientalist genre.

Gebre Kristos Teklehaimanot (1892–1932) was a civil servant, manager of the state press and editor of a popular Amharic newspaper. His predecessors were the scribes and chroniclers of court and church, whose hand-written manuscripts were observational and laudatory testaments, mythologised genealogies and blends of the sacred and mystical with the factual. Gebre Kristos was Ethiopia’s first writer to use print for a mass audience, the first to grapple with foreign ideas and to look at Ethiopia from a world perspective, as well as the world from an Ethiopian perspective. He was born in the northern-most highland province of Hamasein and grew up in Asmara where he was educated at a school set up by Protestant missionaries. In his twenties, he moved to Addis Ababa where Crown Prince Teferi Mekonnen (the future Haile Selassie) recruited him to run Ethiopia’s newly established government printing press.

Gebre Kristos’s singular intellectual contribution was his 1924 book, A Short History of the World in Amharic, in which he integrated Ethiopia – and perspectives on Ethiopia – into world history. De Lorenzi notes that the western tradition of historicising is implicitly constructed against a template of westernisation or modernisation, and contrasts this with Gebre Kristos’s alternative historicisation in which world events, including, for example, the French Revolution, were embedded within a Christian narrative. This generates a historicised teleology which provides an alternative to secular modernisation, in the form of a globalised narrative of religious truth. In his final chapter, De Lorenzi provides a thoughtful commentary on historical method, but his relative parsimony in drawing broader comparisons provokes the reader to speculate on how Gebre Kristos’s framework might relate to those of Asian contemporaries.

Gebre Mikael Germu (1900–69) is De Lorenzi’s third subject. He was also born in Italian Eritrea, but unlike Gebre Kristos, he remained there. His seminal book was The History of Italy and Ethiopia, which was both vernacular historiography and a grand account of colonialism. Unlike the Heruy and Gebre Kristos, who relied on archives and publications, Gebre Mikael drew on oral sources and his own fieldwork.

Although an Italian colonial subject, Gebre Mikael was constantly in contact with Ethiopia and was, in fact, secretly acting as an Ethiopian agent (escaping just in time after his identity was uncovered). After the Fascist defeat, he became a contributor to the Eritrea Weekly News (EWN), managed on behalf of the British Military Administration by the linguist Edward Ullendorf for which the Eritrean journalist Wolde Ab Wolde Mariam was the principal editor and writer. De Lorenzi quotes Ullendorf on the EWN: ‘it was not so much a newspaper, rather the repository of Tigrinya intellectual life and the springboard for the creation of a literary tradition in that language’ (74). That story is enriched by the recent biography of Wolde Ab, hailed as the ‘father’ of Eritrean independence by Dawit Mesfin. Mesfin documents the way in which Wolde Ab, as editor and principal writer for the EWN, almost single-handedly standardised the Tigrinya language itself, creating a definitive written version that could be used for school curricula, publishing and official documents – one of the building blocks of classic modernist nationalism.

De Lorenzi’s concluding chapters include observations on the unequal interactions between western scholars and their local counterparts in the early twentieth century. These ranged from mutually respectful collaboration within a context of colonial hierarchy that selectively recognised the western scholar, to outright racist disregard by the more powerful western researcher for their local counterpart, both as a person and as an intellectual. It is an unfortunate commentary on contemporary social science that those critiques still resonate a hundred years later.

Professor Alex de Waal is the Research Programme Director for LSE's Conflict Research Programme, an adviser for the Centre for Public Authority and International Development and Director of the World Peace Foundation at Tufts University.

Posted In: Africa and the Middle East | Contributions from LSE Staff and Students | History