In Fifty Years of The Battle of Algiers: Past as Prologue, Sohail Daulatzai not only offers an ode to The Battle of Algiers, exploring the film’s intellectual lineage and its impact upon postcolonial liberation movements, but also argues that its revolutionary logic has more recently been inverted in service of the ‘war on terror’. This is a powerful, thought-provoking and stimulating book, finds Srini Sitaraman. 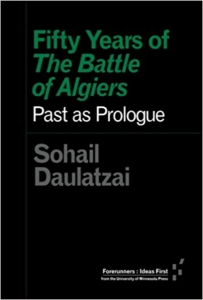 ‘From the wreckage we declare our name: Je Suis Ali La Pointe.’ So begins Sohail Daulatzai’s powerful little book, Fifty Years of The Battle of Algiers: Past as Prologue, published as part of the Forerunners: Ideas First series of the University of Minnesota Press. The Battle of Algiers (1966) was made by the Italian director Gillo Pontecorvo in collaboration with the Algerian government and former Front de Libération Nationale (FLN) fighters. The Battle of Algiers is an evocative film sympathetic to the Algerian independence cause, and served as an artistic and intellectual platform for the anti-colonialism movement and the ‘Global Left’ that was resurgent at the end of the Second World War. The haunting background music was scored by the Italian maestro Ennio Morricone, known for his lively score for spaghetti westerns such as The Good, the Bad and the Ugly (1966). The re-enactment of the Battle of Algiers was shot in the narrow alleys of the capital using a realist style that distorted the line between reality and fiction. The realism of the film was so convincing that a title slide was introduced at some screenings stating that no newsreel footage was used in the making of the film (27).

Daulatzai’s book is an ode to The Battle of Algiers, and he interprets the deeper meanings behind the film, its intellectual and revolutionary lineage and its direct implications for the present-day ‘war on terror’. The book is prefaced by a short introduction and divided into five chapters that trace the wide impact of the film on the ‘Third World’ postcolonial project. By following the roots and routes of the movie, the author, borrowing heavily from Frantz Fanon’s The Wretched of the Earth (1961) and Edward Said’s ‘travelling theory’, draws broad connections to the legacies of slavery, colonialism, racism, capitalism and oppression. The prologue – here placed at the end of the book to underscore its subtitle – concludes with a searing examination of the inversion of the revolutionary logic of The Battle of Algiers in the service of the ‘war on terror’, with provocative questions for issues of terror, torture and gender.

The US Defense department screened the movie following the 9/11 attacks for its military brass to study the counterinsurgency tactics adopted by the French. Of particular interest to the military planners was how the French cracked the clandestine cell structure of the FLN. Screening the film at the Pentagon, Daulatzai argues, has negated the racial logic of the film and erased the cultural memory of The Battle of Algiers as a film that sought to address the structural inequality and resource exploitation of the non-Western world. The book documents and analyses how The Battle of Algiers has become a training tool for the US-led ‘war on terror’ through such cultural appropriation and revisionism. 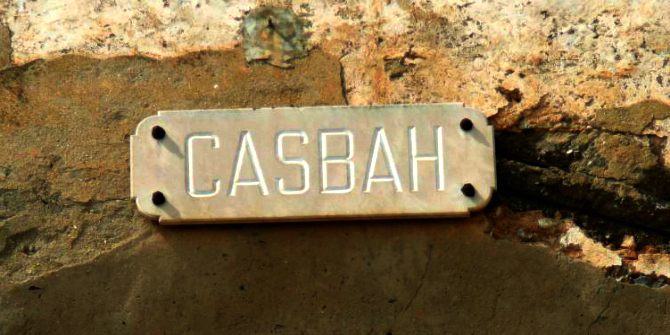 Daulatzai argues that The Battle of Algiers is as relevant today as it was 50 years ago because it is prescient in capturing the present global political condition, where the international ‘war on terror’ has engendered racial panic towards the ‘Muslim other’ and produced tremendous ideological capital and anti-Muslim policies. With the Trump administration, we have now come full circle. Repeated attempts to selectively ban Muslims from some countries from entering the United States, the political battle to build a wall along the US-Mexican border to prevent illegal immigration and the refusal to admit refugees and immigrants especially from poor or majority Muslim countries all speak directly to the colonial divide highlighted in The Battle of Algiers. In the film, the Algerians, including the protagonist Ali la Pointe, live in the crowded Casbah, hemmed in by barbed wires, checkpoints, watchtowers and armed guards, whereas the European part of the town is flush with wealth, culture and gardens. This is reminiscent of the current divide between the rich and the poor in cities such as São Paulo, Johannesburg, Paris, Nairobi, Mumbai, Los Angeles and Chicago. The impoverished populate the barrios, favelas, the projects and the slums, whereas the rich gate themselves in high rises and villas.

The book also confronts the morality of violence portrayed in the film. Is the FLN justified in using violence against the French? If so, are the French justified in countering with disproportionate violence? This begs the larger question: ‘Should we [France] remain in Algeria? If you answer yes, then you must accept all the necessary consequences,’ says Colonel Mathieu (Jean Martin) in the film. In The Battle of Algiers, Colonel Mathieu is the commander of an elite French commando unit and he employs torture to obtain the location of the secret hiding place of Ali la Pointe, effectively crushing the urban guerrilla warfare being waged against the French occupation of Algeria. The question that Daulatzai provokes by extension is: should the United States remain in Iraq, Afghanistan, Yemen, Syria or anywhere in the Middle East and Africa? If you answer ‘yes’, then you must accept all the necessary consequences that come with it. Today, the United States is carrying out raids, surveillance, knock-downs, targeted strikes and drone warfare in Pakistan, Afghanistan, Somalia, Syria, Libya, Iraq, Sudan, Niger, Yemen and many other locales, all in the name of the global ‘war on terror’.

Torture to secure information from those suspected of terrorism continues to roil American politics. Gina Haspel, the current Director of the Central Intelligence Agency (CIA), was accused of overseeing a torture programme. However, her nomination was approved on a party-line vote by the US Congress controlled by the Republican Party. During the George W. Bush administration (2001-2008) the standard mantra repeated by all officials was ‘we don’t torture’, but the CIA through a network of black sites engaged in ‘enhanced interrogation techniques’ that included methods such as waterboarding (simulated drowning) to acquire information from terror suspects.

Shocking pictures from the notorious Abu Ghraib prison in Iraq also come to mind, where the US army and the CIA engaged in deplorable abuse and torture of Iraqi prisoners. Subsequently the outrage, combined with the American occupation of Iraq and De-Ba’athification (ridding the Iraqi government and military of Ba’ath Party and Saddam Hussein loyalists), ignited a virulent insurgency against the coalition forces. Ben H’midi, the putative leader of the FLN in The Battle of Algiers, when asked about the targeting of French residents in Algeria in cafés and cinemas, says: give us your planes and bombs and we will trade our baskets filled with explosives for it (66). Torture was routinised during the French occupation of Algeria. French President Emmanuel Macron recently acknowledged the use of torture during the Algerian war of independence (1954-62), which is thought to have claimed between 400,000 and 1.5 million victims on both sides. Daulatzai argues that there is no moral equivalence between the French violence to quash the freedom movement and the Algerian resistance; he argues that to draw such moral equivalence would be ahistorical and unethical (72).

Daulatzai’s primary contention is that The Battle of Algiers has been inverted to serve the global ‘war on terror’. He bemoans the misuse and inversion of the film, ripping it from its original intent that was meant to create space for resistance against colonial occupation. There is no disputing Daulatzai’s argument that The Battle of Algiers represents a revolutionary paradigm for the past and present; however, it is difficult to uncritically accept the sharp divide separating the ‘Muslim Other’ and the West that frames his book. Present-day battle-lines are no longer drawn as a straightforward binary of the West against Muslims, although there is no denying that this continues to be a huge factor. The US is not unique in targeting its enemies in far-off places: similar tactics are employed by Turkey against the Kurds; Colombia against the FARC (now disbanded following the peace referendum); India against the Kashmiris and Maoists; Sri Lanka against the Tamils; Myanmar against the Rohingyas; China against the Tibetans and Uighurs; and Pakistan against the Ahmadis and Balochis.

The global nationalist project is never over: revanchist powers constantly seek to redraw borders based on nationalist imaginations to prevent secession through the use of violence and surveillance. The national security state determinedly operates in China, Russia, India, Israel, Saudi Arabia, Pakistan, Turkey, the Philippines, Vietnam, Indonesia, Algeria and Egypt. Many of these political processes operate outside the bounds of US or Western imperialism and are often aimed at them. In his broad panoramic sweep, Daulatzai reduces them to the binary of ‘the West’ against ‘the rest’, which misses the political complexity and distinctions that have emerged in the 50 years since the The Battle of Algiers was made. Perhaps the answer to this lies in Fanon’s point that ‘decolonization is quite simply the replacing of certain “species” of men by another “species” of men’ (The Wretched of the Earth, 35).

Sohail Daulatzai’s Fifty Years of The Battle of Algiers: Past as Prologue is a stimulating read. Those on the right or even those who share centrist values might disagree with the sharp polemics in the book, but the ideas are thought-provoking and are surely worth examining.