This essay is part of the LSE RB Translation and Multilingualism Week, running between 10 and 14 December 2018. If you are interested in this topic, all posts published as part of the week can be accessed here. If you would like to contribute on this topic in the future, please contact us at Lsereviewofbooks@lse.ac.uk. 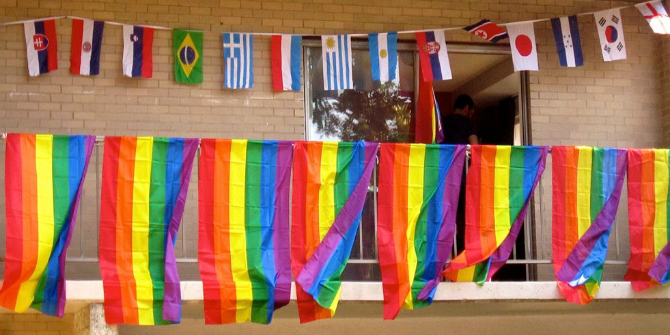 Translation, as the process of writing a text in one language that recreates a text in another language, doesn’t instantly seem to be a fertile ground for discussing LGBTQ+ issues: it might seem like it’s just a process of rewriting or of transferring information. Yet we know that this process is itself never simple and can be influenced by a number of factors, from external pressure in the form of censorship to translators’ own subjectivities and interpretations.

As translation studies has developed, it has expanded conceptualisations of translation: while the early discipline in the 1960s and 1970s focused on the linguistic and literary aspects of texts, from the 1980s onwards scholars have been analysing the cultural, social and political aspects of translation. It is as part of this understanding of translation as a social practice that LGBTQ+ questions come in, as aspects of sexuality and gender can affect how and what translations are produced, can influence translators’ practices and subject formation and can intersect with other analyses of power, such as class and race, in the cultural sphere. LGBTQ+ studies have recently bloomed within translation studies, with recent collections – for example, Translating Transgender from 2016 and two collections from 2017, Queer in Translation and Queering Translation, Translating the Queer – helping set an agenda for future work.

In this post, we will discuss the translation of LGBTQ+ texts and queer vernaculars, the spread of queer theory and its impact in international LGBTQ+ cultures, and gesture towards future developments of the connections between translation and LGBTQ+ activism.

The translation of texts dealing with LGBTQ+ characters and issues poses a number of difficulties. Homosexuality remains illegal in some countries, and in others, despite the legality of homosexuality, media that includes homosexual or trans characters continue to be censored. Keith Harvey’s work on gay writing from the 1990s (e.g. ‘Gay community, gay identity and the translated text’) already asked questions of what would happen if texts were translated into languages and cultures where the topic was taboo. In many cases, texts are simply not translated, or if they are translated, they are not published as it would be too dangerous for the translators and the publishers. Alternatively, as BJ Epstein argues in relation to children’s literature, queer aspects of texts can be erased to make them palatable to audiences in the host culture.

This leads to the situation where a lot of openly LGBTQ+ texts, either written or cinematic, are produced only in those countries and languages where such topics are not taboo. As a result, the texts that are translated and circulating tend to only represent LGBTQ+ cultures from those places, and indeed only certain aspects of those queer cultures: American New Queer Cinema, for instance, tends to focus (although not exclusively) on white gay men or lesbians, leaving out large swathes of the LGBTQ+ population in the USA, let alone the rest of the world. Despite the censorship of LGBTQ+ media in some parts of the world and the consequent lack of official translations, there exists a number of networks of fan translators who translate this material without pay and often with some risk to themselves. Such fan translations may be placed on YouTube or they may only be available behind passwords, depending on how strict the censorship is in a specific country.

Even when there is not censorship, there are still difficulties for the translator. As Harvey noted in this article from 1998, much American gay cultural production uses various forms of camp, due to the historical illegality of homosexuality and the need for gay men to code their interactions in such a way that third parties were not able to understand exactly what was meant. The use of camp and irony render texts difficult for translators as similar resources may not be available in other languages, or may not have the same pragmatic effect.

While Harvey was writing about fiction, queer theory also presents a number of difficulties for translation, not least because of the proliferation of terms within it, but also because of the way that queer theory questions and historicises the meaning of terms like homosexual and queer (e.g. Eve Sedgwick’s The Epistemology of the Closet, among many others). The complexity of queer theory, from writers such as Judith Butler or Lee Edelman, can also prove difficult to translate into other languages due to differences in academic cultures and expectations of scholarly writing. Importantly, the translation of queer theory remains problematic as queer cultures are not the same all over the world and ideas that have been generated in the USA do not always apply elsewhere, as Héctor Domínguez Ruvalcalba explores in his book, Translating the Queer, in relation to the concept of ‘queer’ in Latin America. In addition, in some cultures there is resistance towards engaging with the translation of the term ‘queer’ as it is perceived as an imperialistic imposition from the Anglophone world. Local conditions have a tremendous effect on the reception of texts and ideas, and this remains an area which has been under-researched in relation to LGBTQ+ translation.

There is also a smaller but growing area of work on transgender issues in translation studies. The focus has been on texts such as the memoirs of Herculine Barbin and the way in which the English translation of the text removes or reduces the gender ambiguity in the text, or with linguistic issues, such as the problems of translating transgender terminology given the linguistic gender binary of many languages. An area which is currently attracting interest, especially in Latin America and Southern Europe, is the role of translation in transfeminism: that is, feminism informed by transgender politics.

There remains much more work to do on the connection between LGBTQ+ issues and translation. Within queer theory, intercultural approaches have been coming to the fore, especially through notions of queer migrations and queer diasporas. Translation studies approaches, which have developed tools for discussing how ideas and texts travel beyond their cultures of origin, can contribute here to further understanding queer and LGBT+ worlds and how Anglophone terminology may be limited in use when discussing non-Anglophone situations. Drawing from LGBT+ and queer studies also offers approaches to translation that can help question normative approaches and binary understandings of the relationship between texts and languages.

We also think there is a need to better understand the role of translation in LGBT+ and queer activism, which can allow not only more contact between activists in different locations but more sensitivity to minority populations in the same location who may speak different languages or have different heritage cultures. As such, we are editing a special issue of Translation and Interpreting Studies where contributors will explore these complex relationships and further our understanding of them. We hope this will lead the way for more intersectional work on translation and LGBTQ+ issues in both queer theory and translation studies.

Note: This feature essay gives the views of the authors, and not the position of the LSE Review of Books blog, or of the London School of Economics.

Michela Baldo is an honorary fellow in Translation Studies at the University of Hull. She is the author of Italian-Canadian Narratives of Return: Analysing Cultural Translation in Diasporic Writing (forthcoming 2019) and co-editor of a book on the Italian drag king phenomenon, Il re Nudo. Per un archivio drag king in Italia (2014). Her main topic of research is the role of translation in queer feminist activism in Italy.

Jonathan Evans is Senior Lecturer in Translation Studies at the University of Portsmouth. He is the author of The Many Voices of Lydia Davis (2016) and co-editor of The Routledge Handbook of Translation and Politics (2018).

Ting Guo is Senior Lecturer in Translation and Chinese Studies at the University of Exeter. She is the author of Surviving in Violent Conflicts (2017) and PI on the AHRC-funded project ‘Translating for Change’.