In The Class Ceiling: Why it Pays to be Privileged, Sam Friedman and Daniel Laurison offer a unique and encapsulating analysis of class inequality at the top end of the UK labour market. The book is not only compulsory reading for anybody who still believes that the UK is a meritocracy, writes Liam Kennedy, but its mixed-methods approach allows for important, nuanced and often overlooked aspects of social mobility to be understood.

The Class Ceiling: Why It Pays to be Privileged. Sam Friedman and Daniel Laurison. Bristol University Press. 2019. 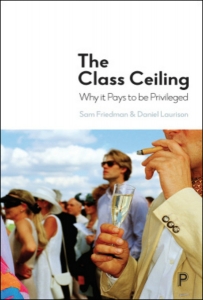 The utility and prospect of social mobility as a policymaking agenda remain hotly debated. Theresa May has spoken of the importance of the ‘British Dream’ and of ensuring people ‘no matter their class’ have an equal say in society. Yet, little over a year ago, the government’s own Social Mobility Commission resigned over a lack of political action. Going further back still, then Prime Minister Tony Blair had declared the end of class war, and debates have also raged in academia about the declining influence of social class.

In The Class Ceiling: Why it Pays to be Privileged, Sam Friedman and Daniel Laurison put these arguments to bed by rigorously demonstrating the lasting impact that social class has on our career trajectories. Taking advantage of recent amendments to the UK’s largest employment survey and conducting 175 in-depth interviews across four elite occupations, the authors not only expose significant disparities in access to top jobs across social classes but also, and crucially, in those who progress in said jobs. They term this lack of progression as ‘the class ceiling’.

The first section of the book is dedicated to mapping out and analysing the class make-up of elite occupations. Unsurprisingly, there is significant variation in how diverse different high-status jobs are when it comes to social class. Yet, more interestingly, even within elite occupations there is a class pay gap of around £6,400. On a yearly basis, ‘those from upper-middle-class origins earn 16% more than those from working-class backgrounds, even in the same set of jobs’ (47).

What’s going on here? The book takes us through a variety of possible explanations. Maybe those from privileged backgrounds are getting paid more because they are older? Nope. Okay, maybe it’s because they’re white? Wrong again. Okay, got it. Maybe because they are men? Another no.

Here, Friedman and Laurison carefully emphasise that the class pay gap should not be seen as more important or more legitimate than pay gaps based on ethnicity or gender, nor do they work in isolation from one another. Rather, these attributes are intersecting and multiplicative. To take one of many examples: ‘Black British working-class women have average earnings in top jobs that are £20,000 less per year than those of privileged-origin white men’ (52).

Image Credit: Crop and lightened version of ‘Candelabra’ by Son of Groucho licensed under CC BY 2.0

The rest of Chapter Three systematically dismisses other justifications for the class pay gap. Education is not the great leveller – ‘even when those from disadvantaged backgrounds do get into Britain’s most hallowed universities, they do not receive the same earnings premium as those from privileged backgrounds’ (62). Even when controlling for ‘meritocratic’ factors, such as hours worked, years of experience etc, more than half of our original class pay gap persists. So again, we must ask, what is going on?

It is here the book progresses on to an examination of the class ceiling. Building on interviews across accounting, architecture, acting and television, the book dissects the mechanisms that prevent those from less privileged backgrounds progressing in their careers. The authors uncover four key drivers of the class ceiling: the Bank of Mum and Dad; sponsorship (where those further up the ladder coach newer entrants); dominant behavioural codes; and the self-elimination of the socially mobile (see Figure 11.1 on page 217).

The first explanation, the ‘Bank of Mum and Dad’, is perhaps the most obvious. The material inequalities between people from different backgrounds profoundly affect the range of opportunities available to them. This is often downplayed by those who benefit from this ‘invisible’ helping hand, but it is vitally important. As others have argued, opportunities for merit are themselves determined by non-meritocratic factors.

Moving on, we encounter Sophie and Martin. Both are competing for the last place on a prestigious Future Leaders scheme within the television industry. Sophie is white, British, privately-educated and from an upper-middle-class background, while Martin is Black British and from a working-class background. In the end, despite very similar credentials, Sophie gets it. ‘All in all, I think she’s a better fit’ (123) is the justification.

This process of ‘fitting in’ is a key mechanism through which those from more privileged backgrounds get on in their occupations. The production, or not, of certain social codes can detract from your ability to ‘fit in’ through, for example, ‘a regional dialect that hasn’t been tempered’ (128), style of clothing or your choice of rucksack. In television, for example, there is a ‘correct way’ to dress. Informal, but not a lazy informal, as one interviewee notes: ‘like notice the trainers [points to her feet]… trainers, but smart trainers, that’s very 6TV’ (134).

These social codes often have a very exclusionary and isolating impact on those not familiar with them. In occupations with stark class ceilings, this ‘social closure’ of elite positions leads to an executive culture that can reinforce and solidify class barriers. As one interviewee commented: ‘Like at the last [meeting], I remember these two Commissioners suddenly started making references to classic literature […] I think it was Greek […] and then there was some Latin, and I was like […] I’m not, this is not my gaff!’ (146).

There are multiple examples of this kind of highbrow culture or what others have labelled ‘polish’ throughout the book, be this the ability to ‘intellectually critique’ in television, speak in received pronunciation in acting (156) or have the ‘gravitas’ to entertain clients in accounting (158). These invisible but keenly felt barriers can eventually lead those from working-class backgrounds to self-eliminate from pursuing career progression. It is important to stress, however, that this is far from a deficiency on their behalf but instead is to be seen in light of the very real, structural barriers in the labour market. As Diane Reay and others have previously emphasised, upward mobility can come at a heavy emotional and psychological cost.

The key driver of the class ceiling in top occupations, the authors determine, is the activation of this ‘embodied cultural capital’. Leaning heavily on the work of Pierre Bourdieu, they argue that being brought up ‘free from economic urgency’ allows those from privileged backgrounds to cultivate a comportment: a way of speaking, dressing, a general inflection or demeanour that can be ‘cashed-in’ in elite settings within the labour market (200). This production of cultural capital is continually misrecognised as merit which allows those from privileged backgrounds to get on at the expense of others.

Interestingly, however, there is less of a class ceiling to be found in architecture. This, the authors conclude, is down to the importance of ‘technical capital’ (203), where competency and knowledge is more easily evaluated than in areas where there is perhaps more ambiguity. To put it bluntly, clients in architecture ‘can see through any bullshit’ (142). This allows those from working-class backgrounds to more easily demonstrate their merit and rise to the top.

My one critique of the book would be that the epilogue, which has a number of recommendations for breaking the class ceiling, falls a little flat. Granted, the focus is on getting people to progress in work, but surely part of the problem here is that too few working-class people get in in the first place. Greater representation of working-class life and knowledge must be a fundamental stepping stone in challenging institutional classism within these elite professions.

All in all, however, The Class Ceiling is brilliant and to be wholeheartedly recommended to anyone interested in social class, inequality or meritocracy in contemporary UK society. Its innovative methodology, which powerfully elevates the voices of those studied, moves us beyond static and quantitative approaches to social mobility. The authors’ irrefutable conclusions present a real opportunity for change to be made and further research to be undertaken.

If you are interested in this book, you watch a video and listen to a podcast of the authors discussing The Class Ceiling at LSE, recorded on 28 January 2019. Slides from the event can also be downloaded. You can watch an LSE Festival 2022 short discussing Sam Friedman’s work on the class ceiling: