In American Folk Music as Tactical Media, Henry Adam Svec excavates the American folk music revival of the mid-twentieth century to show its continued relevance to contemporary digital media culture, exploring the media central to the production of folk music’s imaginary from Alan Lomax’s Dictaphone machine to Woody Guthrie’s guitar. This is a rich and engaging analysis, writes Michael Audette-Longo, that provides readers with a tour through the politics of folk music, both past and present, and demonstrates its significance for contemporary media systems. 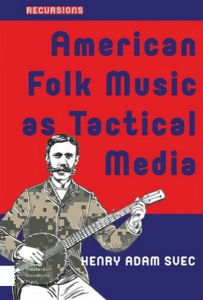 Bob Dylan’s typewriter. Woody Guthrie’s guitar. Alan Lomax’s Dictaphone machine. Pete Seeger’s hammer. These are a few of the folk musicians and technologies placed front and centre in Henry Adam Svec’s American Folk Music as Tactical Media. This is a rich and engaging book that excavates and scavenges through the American folk music revival – defined by Svec as ‘the moment in mid-20th century America that young people turned to acoustic guitars and to various vernacular traditions’ (13) – to ask and answer the question: ‘What if the American folk revival had something to teach us about […] digital media culture?’ (13).

Svec’s opening chapter outlines the book’s theoretical interventions into the fields of folk music, media and communication studies. It weaves together ‘media theory’ scholars like Harold Innis, Marshall McLuhan and Friedrich Kittler; tactical media studies scholarship from Geert Lovink, the Critical Arts Ensemble and McKenzie Wark; and media archaeology, as practiced by Jussi Parikka, Siegfried Zielinski and Geoffrey Winthrop-Young. Svec flags a lack of deep engagement with media technologies in folk music studies and a more myopic focus on digital technologies within tactical media studies. He uses the field of media archaeology as a connective theory to foreground the media central to the production of folk music’s communicational and political imaginary.

Chapters explore different couplings of technology and folk musician, moving from Lomax’s Dictaphone machine to Dylan’s typewriter to social media-augmented hootenannies. Svec explains that through these juxtapositions: ‘I look for coagulations and dams of techno-cultural possibility, and have found them pooling around ‘‘authors’’ of various diagrams of communication’ (25). Phrased differently, Svec reframes American folk music as a field of musical and technological activity (and potentiality) that has an instructive role for individuals looking to develop new tactics to disrupt, and indeed, reimagine the contemporary digital media imaginary.

Image Credit: ‘woody guthrie on the wall in the street’ by denise carbonell licensed under CC BY 2.0

Chapter One examines Lomax’s drive to record and archive folk music, a project he first pursued with a Dictaphone recording machine in the 1930s, before later collaborating with different personnel at IBM on a ‘Canometrics’ project that endeavoured to create a folk music database. Stitching together archival research from Lomax with the writings of first-wave cybernetician Norbert Weiner and media theorists Mark B.N. Hansen and N. Katherine Hayles, Svec reframes Lomax as a systems-oriented folklorist-cum-cybernetician, aiming to create an internet-styled information management system attuned specifically to the songs, technologies, voices, geographies and bodies central to folk music. Svec further explains that in this pursuit:

Lomax was listening for a utopia wherein digital networks are always already plugged into our fleshy voices, which richly and complexly embrace, but shall not be reduced to, code.

Chapter Two examines Seeger as media figure, exploring his numerous appearances on broadcast television and in written communications. Again, abridging his archival research with John Durham Peters’s work on disseminations-oriented media systems, Innis’s conceptualisations of space and time-bias and the writings of tactics-oriented media scholars like Wark, Svec maps out an alternative approach to folk media that looks at the embrace (rather than rejection of) ‘mass’ media to disseminate musical and political messages. In Seeger, Svec argues that ‘the act of folk singing is figured as the spraying of a stream, and the folk singer does not search for face-to-face recognition but rather wanders the earth spreading the seeds of folk’ (63).

Later chapters examine further couplings of machines and folk music-related musical, cultural and technological activities. Chapter Three looks at Dylan and his typewriter (and pairs him with Apple co-founder Steve Jobs) to excavate the technologies undergirding the production of ‘genius’. Chapter Four surveys a litany of ‘imagined’ media (coming from Svec’s time coordinating and leading an Imagined Media Laboratory at the University of New Brunswick) that have the potential to identify and subvert current trends and tendencies in digital media culture. Chapter Five excavates Guthrie’s writings on hootenannies, dismissals of ‘folk politics’ advanced within the Accelerationist political-philosophical movement and the human microphones central to the Occupy protests to flag folk’s continued societal and political circulation through different (sub-)cultural and technological systems. Chapter Six looks to YouTube, Justin Bieber, digital folk revivals and platform-augmented hootenannies to glean modes of folk participation still circulating through, and developing within, the commerce-driven and social platform-centred digital mediascape.

Overall, this is an interesting, theoretically dense and demanding book. The emphasis on media theory, tactical media studies and media archaeology is complemented by detours through such theoretical strands as first-wave cybernetics, autonomist Marxist theory and Gilles Deleuze and Félix Guattari’s work on faciality. Nearly every argument articulated by Svec is supported by a robust set of references and citations. Even the book’s introductory scene-setting, which opens by discussing the politics and performance of the American folk music revival set out in the Coen Brothers’ 2013 film Inside Llewyn Davis, is undergirded by more than a dozen footnote references to writers as varied as Raymond Williams, Simon Frith and Pierre Bourdieu. This makes for an at times challenging and idiosyncratic read in its density; however, Svec draws on numerous theories and theorists and connects seemingly disconnected disciplines and subject matters in such a way that invites speculation about how media guides, constrains and enables certain communications, cultural and political activities.

In genre terms, this book fits within turns in media studies to sound and media archaeology, denaturalising the folk music genre by foregrounding the different technologies structuring the politics and practices of this musical scene. It also works as a form of media theory, not only teasing out and applying theories from the likes of Kittler, McLuhan, Peters and Innis, but also showing readers that Seeger, Guthrie and Lomax produce their own forms of vernacular theory. Finally, it provides readers with a robust tour through the politics of folk music, both past and present, and teases out the ways in which such folk activities are ripe for further development within contemporary media systems. Instructors planning either fourth-year-level undergraduate or graduate seminars in the topics of sound studies, media archaeology or tactical media studies should find use for this book, as should graduate students planning either their own research projects or considering how to develop their projects into books.

Michael Audette-Longo is an Instructor in Communication and Media Studies at Carleton University. He received his PhD in Cultural Mediations from Carleton University. Michael teaches and researches on sound, digital media industries and media platforms. He has published in journals such as Topia, Critical Arts and The Journal of African Cinemas.