In The Use and Abuse of Music: Criminal Records, Eleanor Peters introduces music as a powerful instrument for thinking critically about crime and its contested meanings, while also attuning readers to its use as a conductor of politics and a record of abuses by liberal and oppressive regimes alike. While the book is short in length, it succeeds in condensing valuable insights into music as a unique mode for thinking about law-making, law-breaking, violence and torture, as well as censorship and resistance, writes Lambros Fatsis.

The Use and Abuse of Music: Criminal Records. Eleanor Peters. Emerald Publishing. 2019. 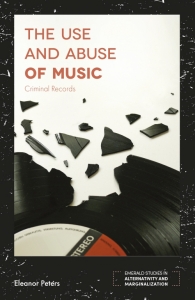 I am a criminologist by trade. Like this book’s author, however, I am also a music lover. It is therefore no surprise that, as a kindred spirit, I found Eleanor Peters’s The Use and Abuse of Music: Criminal Records to be a compelling read and a welcome wake-up call for our tone-deaf discipline. Beyond stirring private passions and inspiring a sense of scholarly affinity, however, The Use and Abuse of Music draws its resonance from the power of its insights. Not only does the book invite us to think with music about crime, but also urges us to consider ostensibly ‘dangerous’ music genres as both products and objects of the criminal justice system. In so doing, the author demonstrates how music can function as a source of knowledge about crime, because of how it is policed against as a source of deviant or transgressive behaviour, but also how it is weaponised as a resource for political dominance and social control. Building on this sophisticated view of how both crime and music are ‘made’ culturally, pursued legally and manipulated politically, the book gracefully straddles the subfields of critical and cultural criminology, while also staking out a role for a nascent critical criminology of music.

The Use and Abuse of Music is neatly organised in three parts, each of which contains two related chapters. The book’s structure makes it easy to read and gives the text a sense of rhythm, not unlike a steady beat that moves us along as we read. Part One starts with an exploration of how music-making can be perceived as dangerous and is repressed as such by law enforcement agencies, and outlines the complex processes by which ‘the ability to label music as harmful’ through ‘the demonisation of certain genres and their followers’ becomes a ‘self-fulfilling prophecy’ (12). To do so, Peters borrows the theoretical language of moral panics and deviancy to show how ‘crime’ is largely produced by and through reactions to certain acts, activities and events that become legally punishable offences because they are perceived as deviations from an assumed norm.

This perspective on criminality as a culturally-loaded label, rather than a neutral legal sanction, informs the entire book, encouraging the reader to consider ‘who has the power to criminalise, diminish or to harm through the systematic and consistent empowerment of some groups and the persecution and criminalisation of others’ (5). To illustrate this point further, Peters moves on to challenge stereotypes that lazily equate rap with knife crime, heavy metal with Satanic worship or emo kids with suicidal self-harm, and stresses how the ‘demonisation of some genres and the association with violence has led to miscarriages of justice, unwarranted medical intervention and societal opprobrium’ (54).

Image Credit: ‘Obsolete’ by Andrew Malone licensed under CC BY 2.0

Having laid the conceptual groundwork for what follows, Peters showcases ‘deviant’ and ‘murder’ music genres, such as heavy metal, rap and Oi! punk rock, by linking them to the youth subcultures from which they spring in order to upset stereotypical associations between music subcultures and criminality, without simplistically equating them with or absolving them from wrongdoing altogether. Her discussion of heavy metal and rap, for example, shows the exaggerated ways in which they are blamed for violent incidents with little or no evidence to justify such claims, whereas her analysis of white power punk rock groups demonstrates much stronger links between song lyrics, performers and fans with organised far-right political groups like the neo-fascist British Movement.

Part Two moves away from troublesome music genres, focusing instead on the way music is used as an instrument for nation-building (via anthems), war-making (through martial music), torture (by acoustic bombardment) and the maintenance and control of social order. Some of the examples given here include the use of loud music as a form of torture in Iraq and Guantanamo Bay, the adoption of the Mosquito device to repel loitering from shopping centres and the use of rap lyrics as evidence in court hearings. What is particularly arresting here is the author’s argument about how music can be used as an aural weapon against unwanted populations, be they civilians, ‘enemy combatants’, protesters, ‘youths’ or non-consumers: all of which are deemed undesirable in times of war and peace alike. Another vital observation that stands out in this section of the book is the acknowledgment of how music, often conceived of as a subversive force, can also be used to serve and enforce the status quo rather than rebel against it, be it by upholding patriarchal norms or waging ‘sonic warfare’ against vulnerable groups.

The third and final part of the book directs our attention to the omnipresence of sound as a pollutant that attacks our senses in urban environments and can be as exciting as it is exhausting, and as wholesome or threatening as law enforcement and other agencies wish to make it. Peters makes some very good points here about how music can threaten urban dwellers’ health and well-being, while also being savoured as an exciting soundscape or disapproved of as a form of anti-social behaviour. Music can therefore become noise, and noise can be perceived as music depending on where it happens, how it sounds, who plays it and who its audience is. On that note, Peters also debates the censoring of music, revealing the ‘subtle and invidious ways that music and musicians can be stopped, often in countries where outright bans would raise liberal democratic alarms’ (123). A timely case in point is the criminalisation of and the policing against UK drill music that is often maligned for causing London’s knife crime, but the book also considers the religious and political persecution of Arab rap too.

In 150 or so pages, Eleanor Peters successfully manages to call for the appreciation and adoption of music as an undermined resource in criminology, brimming with insights on how music is targeted as a source of danger, embraced as a sonic weapon, regulated as a health risk and policed as a security threat. The Use and Abuse of Music, therefore, emerges as an indispensable primer in the virtually non-existent criminology of music which can be appreciated as a short, punchy contribution to the relevant critical and cultural criminological literature or used as an eminently readable resource for teaching. More importantly, however, Eleanor Peters’s book inspires and challenges the criminological imagination to press against its limits and attune itself to music as a valid mode for thinking about ‘crime’ and doing criminology in a different and more exciting register.

Dr. Lambros Fatsis is Lecturer in Criminology at the University of Brighton. His current research focuses on the criminalisation of UK grime and drill, parts of which has been published in academic journals (Crime, Media, Culture, The Sociological Review) and open-access platforms (British Society of Criminology blog, Discover Society).