In Regeneration Songs: Sounds of Investment and Loss from East London, editors Alberto Duman, Dan Hancox, Malcolm James and Anna Minton bring together a diverse arrays of texts and artistic interventions – including an accompanying soundtrack, Music for Masterplanning – that pay testament to the connections between place, people and music in East London at a time when the forces of global capital and investment are threatening to tear them apart. Acting as a collective exercise in radical memory that opposes the violence of urban renewal, this is an original collection that will be a welcome resource for anyone interested in gentrification, popular music and urbanism, recommends Alessio Kolioulis. 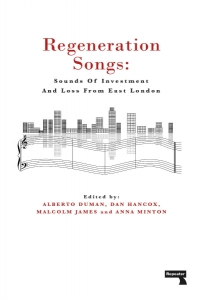 Regeneration Songs: Sounds of Investment and Loss from East London is a critical intervention in the fields of gentrification and urban studies. This large volume of more than 500 pages escapes rigid academic convention and includes essays, artistic interventions, interludes, poems, interviews and a rich collection of black-and-white pictures. The diverse selection of texts tells the story of the impact of a ‘Regeneration Supernova’, a large-scale regeneration project in East London, on the people living in the Boroughs of Newham, Tower Hamlets and Hackney.

The ‘Supernova’ was part of the wider infrastructural redevelopments connected to the London 2012 Olympic Games. Senior officials like former London Mayor Boris Johnson marketed the project to overseas investors and branded the reconfiguration of one of the largest post-industrial areas of London with the term ‘Arc of Opportunity’: a special zone for investment connecting the lower Lee Valley with London’s Royal Docks.

One of the primary goals of the collection was to provide a soundtrack about ‘place, people and music’ for the three-minute promotional video that the London Borough of Newham screened at the Shanghai World Expo in 2010 to attract investors to this ‘Arc of Opportunity’. Released by the Borough following a freedom of information request, the promotional video was shared to the editors of the book without the audio. Thus, artist and editor Alberto Duman curated the book’s accompanying compilation Music for Masterplanning in order to give voice to the people who have been denied participation in the regeneration process, thanks to a grant from the Leverhulme Trust for a residency at the University of East London (UEL).

Set within this context, the framework of Regeneration Songs lies in the connection between cities and music. This link between popular music and urban studies is experiencing renewed attention from academics and the music industry. On the one hand, global brands like Red Bull champion underground music and local countercultures, while on the other hand profiting from their associated cultural value. This phenomenon – which is certainly not new – signals that financial investments greatly need to absorb the vitality of culture. When they do so, however, they also jeopardise it. For instance, a collateral effect of the financialisation of the economy is the recognised link between the closure of independent music venues and processes of gentrification. This is particularly true in London, where this trend led to a series of protests to ‘save nightlife’.

Of the four editors, two are particularly prominent figures in the fields of music and urbanism. Alongside Duman and Malcolm James, Anna Minton is the author of Ground Control (2012) and Big Capital (2017) and Reader in the School of Architecture, Computing and Engineering (ACE) at the University of East London (UEL), while Dan Hancox is a music journalist and author of the award-winning Inner City Pressure: The Story of Grime (2018), which will soon be turned into a TV series.

Listening to the 17 tracks that form Music for Masterplanning (and bearing in mind that each song could be the soundtrack of the promotional video), three songs are particularly powerful. ‘Mary Finch’ by You Should See The Other Guy, a politically-orientated theatre company, is a monologue taken from a community play in which a female choir comments with irony on the dramatic actions of an elderly campaigner who opposes the destruction of Carpenters Estate, Stratford. ‘I Am The East End’ by Romerlin (Paul Romane and Melina Merlin) records the acoustic landscape of The Thames in E16, a dreamy amalgamation of water, waves, ferries and the people who have crossed the river. ‘Complex Glory’ by Hyfn (Sebastian Hau-Walker) is a great sonic exploration of the concept of prosperity through the materiality of the ancient Chinese instrument chime stone, mediated by the distortions that characterise grime music. Overall, the album is a surprise and testimony to the huge diversity of East London, which is usually linked to the genres that defined it, such as grime and electronic music.

A key thread of Regeneration Songs is the question posed by Duman:

How can the role of ‘‘the artist’’ in inverted commas pursue radical agendas around housing and its lack without getting embroiled in a gentrifying process? […] Because it would seem to me in the current situation it’s virtually impossible, that one needs to lose one’s identity as an artist in order to get involved in politics (29).

Several contributions to the book, including ‘The Use of Poetry’ by Gillian Swan and ‘The Royal Docks as Museum’ by Matthew Friday, denounce the use of artistic imagination to meet the ends of property developers. For instance, when the façades of old warehouses are restored, the interiors are redesigned to increase consumption. In so doing, ‘the industrial heritage has been repurposed as an aesthetic item but very much subservient to the modern times’ (117).

When it comes to the critical aspects of the collection, researchers on gentrification and popular culture looking for a book on the structural links between music and architecture may be dissatisfied. In this sense, the book provides readers with primary data, rather than an effort to sketch out not only some reasons that could explain why these sounds at this time and space, but more generally the link between the acoustics of ‘investment and loss from East London’ and culture. For instance, the word ‘song’ often works only as a metaphor or a synonym for discourse or narrative within the book itself. The third part of the book, ‘Sound and Vision’, remains the most loyal to the title of the collection. However, the interventions here could have been strengthened by providing more references to ‘urban music’ and its role in projects of regeneration (see, for instance, Music and Urban Geography by Adam Krims).

Owen Hatherley’s chapter, ‘From the Factory to the Pop Centre and Back’, gives a witty account of the role of musicians-turned-businesspeople in gentrifying Manchester and Sheffield. Yet, the chapter leaves some questions unanswered. What is peculiar about the development of night-time economies in the UK? How is this phenomenon entrenched within current dynamics in East London? Which useful lessons could be learnt? That being said, Regeneration Songs is not strictly speaking an academic book and is in line with the spirit of the publisher Repeater, which was founded by Mark Fisher and Tariq Goddard among others, and is dedicated to the intersection of popular culture and dissent. Regarding this theme, the collection is strong.

The chapter ‘Empire State of Mind’ by Tom Cordell signals what political geographer Stefan Kipfer defines as the neo-colonial modus operandi of a racist state. Policing techniques used in the colonies were quickly deployed in London’s Royal Docks when people from the Commonwealth migrated to London. Jane Rendell’s experimental intervention ‘Condensing and Displacing: A Stratford Dream-Work’ is a testimony of the deeply controversial aspects of ‘University Urbanism’: a practice in which universities actively contribute to research on university campus development and regeneration goals. UCL’s expansion in East London faced opposition by local communities and anti-gentrification campaigners. Perhaps, following Phil Cohen’s text ‘London Aftershock: Variation on a Theme by Walter Benjamin’, only a displacement of hegemonic narratives can regain control over material transformations.

To conclude, Regeneration Songs is an original collection that will be an obvious resource for anybody interested in issues of gentrification, popular music and urbanism in London. The book functions as a collective exercise in radical memory: an archive of sounds and messages opposed to the violence associated with projects of urban renewal.

Note: This review gives the views of the author, and not the position of the LSE Review of Books blog, or of the London School of Economics. The LSE RB blog may receive a small commission if you choose to make a purchase through the above Amazon affiliate link. This is entirely independent of the coverage of the book on LSE Review of Books. The feature image was replaced on 14 May 2021 for editorial reasons.

Alessio Kolioulis is a Double PhD candidate in Aesthetics (Paris 8) and Urban Studies (Rome La Sapienza), with a thesis on techno music, urban territories and social ecologies. He is a Visiting Research Scholar with the Sonic Research Group at London South Bank University. Alessio published articles with journals such as Dancecult, Mediapolis and Millepiani Urban and is an editorial board member of Eterotopia France, an independent publishing company, and engagée, the Journal for Political and Philosophical Interventions.