In Fictioning: The Myth-Functions of Contemporary Art and Philosophy, David Burrows and Simon O’Sullivan define and map instances of the practice they term ‘fictioning’, referring to acts of writing, imaging, performing and envisaging worlds or social bodies that diverge from dominant organisations of life. The book calls for us to follow the paths and rituals it traces and to discover thresholds where we might usually find barriers, writes Lilly Markaki. 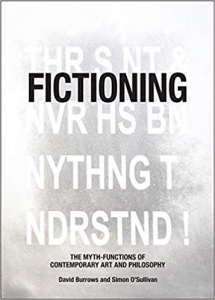 Reading Fictioning: The Myth-Functions of Contemporary Art and Philosophy has brought me great joy; its review, however, not so much. The task is complex for a number of reasons. There is, to begin with, the obvious problem of how to give a short evaluation of a book that not only is but also feels vast. In the 513 pages that make up Fictioning, the reader comes across multiple figures, fields and temporalities: from Carlos Castaneda to Reza Negarestani; from Yucatán to Silicon Valley; from 1913 to extinction and the end of times. What to select and what to leave out? There is also the problem of teasing out all the different ways in which this book can be read or utilised, for there are many: multiple selective readings are indeed possible, and Deleuzian scholars, historians and theorists of the avant-garde, postcolonial and feminist theorists, theorists of the posthuman, artists and occultists will, among others, all find something of value here. There is, finally, what seems to me to be the biggest difficulty of all, which consists in finding a way to make this book manageable for the purpose of reviewing it, without diminishing its spirit and complexity and without betraying its poetic sensibility.

The best place to begin is, of course, at the beginning. Fictioning is the result of a collaborative effort, the writing process shared here by David Burrows, a Reader in Fine Art at the Slade School of Fine Art, and Simon O’Sullivan, Professor of Art Theory and Practice in the Department of Visual Culture at Goldsmiths. Its purpose is to define and map instantiations of a concept or practice to which the authors, inspired by continental philosophy, give the name of ‘fictioning’. Explored at some length in the book’s introductory pages, ‘fictioning’ is a term that, very simply put, aims to denote ‘invention in the realm of life (a technology of immanence as it were)’ (2). Of course, ‘fictioning’ is for Burrows and O’Sullivan more specific than this, referring to practices or inventions of a particular modality:

By using the term fiction as a verb we refer to the writing, imaging, performing or other material instantiation of worlds or social bodies that mark out trajectories different to those engendered by the dominant organisations of life currently in existence. Or, to put this another way, we are interested in exploring those fictions that involve potential realities to come…

While they share a common impulse – one that the authors continuously remind us is simultaneously disruptive and creative – such fictions can take different forms and shapes, and can be understood as also having different starting points. Fictioning is thus divided by its authors into three parts, each dedicated to one of three ‘myth-functions of contemporary art and philosophy’, as they call them, and their related mode of fictioning. 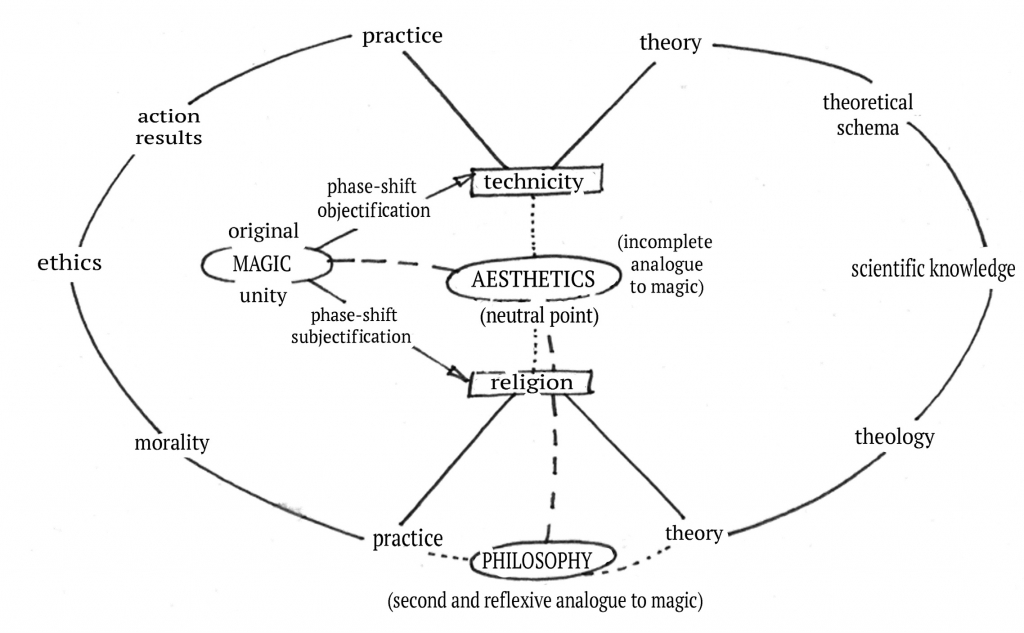 The first of these is ‘mythopoesis’, associated with performance fictioning, and which ‘is proposed as productive of worlds, people and communities to come, often drawing upon residual and emergent cultures’ (1). The work of Gilles Deleuze is here a key resource, and ‘mythopoesis’ is elsewhere described in the book as ‘a name for a summoning – or calling forth of a people who are appropriate and adequate to those new and different worlds presented in art, films, performances, writing and other practices’ (15). After ‘mythopoesis’ comes a section on ‘myth-science’ and science fictioning, where the practices of Sun Ra, a human musician and an alien from Saturn, as well as that of Mundane Afrofuturists and Xenofeminists are, among others, shown to be productive of ‘alternative perspectives and models, [by] revealing habits of thought […] as yet more myth’ (what ‘myth-science’ is about) (1). This section is followed by a third and final part on ‘mythotechnesis’ and the related idea of a kind of machine fictioning, concerning ‘the ways in which technology enters into discourse and life’ (1) and attending to ‘technics of adaptation and cloning, as well as technologies of coding, compression and layering, and also editing, scanning, time-stretching and pasting ’(7).

Exactly how the different myth-functions of ‘mythopoesis’, ‘myth-science’ and ‘mythotechnesis’ and their related modes of fictioning are differentiated from or relate to one another is difficult to perceive just from the few lines above, but the matter is elucidated the more one engages with the different sections of the book. It should be noted, however, that the distinctions which Burrows and O’Sullivan make here are not intended to describe clear-cut categories, but are rather adopted as heuristic devices; this explains why certain voices reappear in different parts of the book, as is the case with those of Deleuze and Félix Guattari (which the authors do not employ uncritically) as well as a number of others.

The different subsections under each of the book’s main parts present entry-points into each specific mode of fictioning, but all chapters are methodologically connected in that they all place philosophy and art as well as science side by side and on an equal plane, drawing connections between them but also pitting them against one another – as when the authors look at ‘genes versus memes’, for example (474). Each chapter involves, in other words, a kind of staging of a dialogue or confrontation between different fields through selected representative figures. These figures are sometimes close, as in the case of William Burroughs and Deleuze explored in Chapter Two, ‘Against Control: Nothing is True, Everything is Permitted’. Others are far apart: enjoying no historical connection, they are linked together through the mode of fictioning to which they belong or which belongs, I should say, to them, as when Austin Osman Spare, Robert Smithson and Yoyoi Kusama are examined together in Chapter Four, ‘Mirror Work: Self Obliteration’. It is in the latter case, when connections are made in strange places and which were previously absent, that the book also becomes a reminder that when we read and write, we do so from a certain perspective and in order to get somewhere – that we engage ourselves, in other words, in ‘fictioning’.

This, of course, is not an accidental quality of the book, but its true face: Burrows and O’Sullivan are not collaborators in writing and thinking alone; they also partake, together with others, in practicing collective fictioning under the guise of Plastique Fantastique, and this experience is both before and behind Fictioning. The book is thus, as they admit, not strictly ‘academic’; its concern is neither with history nor with analysis, despite the fact that both are present in the text, but with lines of flight and points of departure. If in-depth analysis of the philosophies or practices that the book explores is not always given, so that Fictioning requires an active, if not informed, reader, this is because at the heart of it is a call to follow the paths it traces; to perform and to make our own versions of the rituals it brings to our attention; and to discover thresholds where we normally find barriers, as in the case of that most persistent fiction and which remains at the core of the text: the fiction of the self. Whoever else it may be for, Fictioning seems to me to be a book for, above all, believers:

We admit to proceeding as if fiction were reality; that is, proceed like Austin Osman Spare would have us do, through experimenting with believing in what we know might not be true. We adopt this approach, which also necessarily involves a performance of fiction, not just to test our perspectives on reality, or as a therapeutic practice, but as a political mode with recognising that fictioning is a power that can have real effects, particularly when a host of forces can be mustered to enact a fiction.