In Young Working-Class Men in Transition, Steven Roberts draws on a seven-year longitudinal study of young working-class men in the south-east of England to counter dominant narratives surrounding working-class masculinity, instead showing the potential for working-class men to challenge hegemonic norms and foster more egalitarian ways of living as men. This book shows how stereotypes can perpetuate the marginalisation and misrepresentation of working-class lives and obscure the pathways towards greater equality emerging within them, writes Karla Elliott. 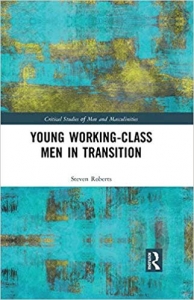 Steven Roberts’s book Young Working-Class Men in Transition provides a much-needed intervention into the field of critical studies on men and masculinities. This seven-year longitudinal study of young men from working-class backgrounds in the south-east of England counters dominant narratives of working-class men as regressive, violent and upholding unequal norms of harmful masculinity. Roberts instead highlights the potential of working-class men to challenge hegemonic norms and forms of masculinity and to model more egalitarian ways of living as men.

Roberts empathetically explores the lives, narratives and transitions to adulthood of 24 young, white, heterosexual men aged 18-24 at the time of their first interview who were employed in the service sector in England. He sets this exploration against a backdrop of social and economic restructuring, particularly the decline in heavy industry and manufacturing. Through interviews and social media ethnography, Roberts provides a rich account of the participants’ experiences, practices and attitudes at school (Chapter Five), in paid work (Chapter Six) and in domestic work (Chapter Seven), as well as their expressions of vulnerability and emotion (Chapter Eight).

In Chapter Three, Roberts establishes the theoretical framing for the book, tracing the key tenets and histories of social constructionism and post-structuralism, hegemonic masculinity, inclusive masculinity theory (IMT), the sociology of generations and Pierre Bourdieu’s conceptual tools. Roberts deftly weaves these theoretical strands together in order to establish a ‘research tools’ approach to studying young men. This approach affords a nuanced exploration of change and continuity, lived experience and structural influences and constraints as these play out amongst contemporary young working-class men.

Roberts’s careful use of theory also brings to light one of the book’s most critical findings: that it is the working-class habitus under contemporary social and economic conditions that fosters a move towards egalitarianism and more positive forms of masculinity. As Roberts writes:

This identification of change and progress in terms of men and masculinities as stemming from the margins of society is one of the most valuable contributions of Roberts’s book. This finding destabilises taken-for-granted ideas of privileged, middle-class, white men as the vanguard of progressiveness. Instead, working-class men emerge in this research as those better placed to lead transformation in terms of masculinities.

Roberts finds that the young men in his research embraced vulnerability, demonstrated increased inclusivity towards gay men, practised a more egalitarian division of domestic labour and unpaid care work and held a ‘middle-ground’ orientation to schooling rather than being especially disengaged or conforming. For example, housework and childcare had become normalised aspects of the practices of these men. Though this work in some ways continued to be gendered, the men did not avoid it in order to consolidate a normative or hegemonic masculinity. Similarly, they demonstrated a capacity for, and even enjoyment of, the emotional labour involved in doing service work, such as interacting with and helping customers. This contrasts with previous research that has suggested men attempt to recuperate ‘masculine’ identities when employed in service-sector work. In online spaces, the men also showed extended capacity for emotional display, which, while not automatically progressive, does point to changed forms of masculinity amongst these young working-class men. Overall, Roberts discovers these men doing the work required for moving towards equality, rather than simply stating egalitarian ideals.

These changes existed alongside some ongoing recourse to more troubling narratives and practices concerning, for example, women and gay men. For instance, while they undertook domestic work and saw an equal division of household labour as important, some of the men still viewed their partners as more motivated to carry out housework to a higher standard. Furthermore, some continued to draw at times on homophobic and sexist discourse, and in some ways spoke in objectifying terms about women. Roberts presents a careful and nuanced analysis of these ongoing inequalities, and keeps them in mind as he highlights the important and significant shifts that were also taking place at the same time.

Roberts draws particularly on inclusive masculinity theory (IMT) to consider the change he discovers emerging amongst young working-class men. IMT posits the concept of ‘homohysteria’ as central to understanding masculinities, defining homohysteria as a fear amongst men of being perceived as gay. IMT suggests that as homohysteria decreases, two forms of masculinity – inclusive and orthodox – emerge, with neither being hegemonic. However, the change documented throughout the book seems to go beyond the explanatory power of IMT. While the men in Roberts’s study demonstrated increased inclusivity towards gay men, a key tenet of IMT, this was not the full extent of their emerging, more progressive iterations of masculinity, as outlined above. Roberts also addresses the specific working-class-ness of the shifts he observed amongst men in his study through his utilisation of the sociology of generations and Bourdieusian thinking. Roberts carefully documents the shifting structural conditions that provide the setting for the changed working-class habitus he uncovers, including, for example, the decline in heavy industry and the rise in service-sector work. These conditions extend beyond a decrease in ‘homohysteria’. Roberts’s ‘research tools’ approach therefore helps to identify change and theorise its emergence, particularly amongst working-class men. What remains is to find ways to more fully understand, theorise and foster these shifts. This constitutes an important task for future research building on the insights produced through Roberts’s work.

Beyond its contribution to academic thought, Young Working-Class Men in Transition holds key implications for the wider project of social justice and emancipatory research. It reminds researchers of the need to reflect on the narratives and discourses that are taken for granted and accepted as fact in the academy, and the impact of these on those thus positioned as ‘other’. To again quote Roberts:

The widespread discursive construction of working-class masculinity as axiomatically ‘‘in deficit’’ is an act of symbolic violence, but also functions as a diversionary tactic for middle-class and elite men whose practices are thus more rarely scrutinised […] For all the wrongs that do emerge as a result of masculinity, there’s nothing specifically working-class about them at all; orthodox masculinity is problematic and spans the class spectrum, as does inclusive masculinity. Harnessing the latter and tackling the former can only be achieved by acknowledging this and making greater efforts to stop reifying stereotypes and recreating myths (216).

Roberts gives voice to a commonly marginalised group and calls for a redirection of the social sciences away from stereotypes about working-class men. As he demonstrates, these stereotypes can perpetuate the marginalisation and misrepresentation of working-class lives, and they obscure the pathways towards greater equality and progress emerging from marginalised groups in society. Young Working-Class Men in Transition thus provides a timely and important contribution to knowledge of, theorising on and work towards equality.

Dr Karla Elliott is a Research Fellow at the Melbourne School of Population and Global Health, The University of Melbourne. Her research explores gender, men and masculinities, social inequalities and gendered and family violence.

Posted In: Britain and Ireland | Gender and Sexuality | Sociology/Anthropology