In Cultural Backlash: Trump, Brexit and Authoritarian Populism, Pippa Norris and Ronald Inglehart draw on statistical data and a wide literature to make the case that patterns of voting for populist parties across Europe, Brexit in the UK and Donald Trump in the USA all show substantial intergenerational differences. This is a large and ambitious book, but Ron Johnston was less convinced by the empirical evidence presented. 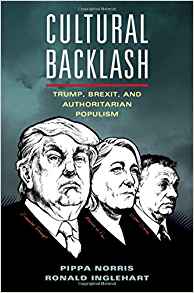 The recent growth of support for populist political parties – mainly on the right but some on the left – plus the emergence of leaders with authoritarian tendencies in many Western societies have attracted much interest. For English speakers, these trends have typically been characterised by the rise of UKIP in the UK and the 2016 Brexit vote alongside the election of Donald Trump in the USA, but those events were only part of a much wider shift.

Many theories have been advanced and tested to try and account for these phenomena. Most popular have been two groups: one sees support for populist parties being strongest among those who have benefited least from decades of globalisation, who blame their position on the liberal elites who dominate politics and whose class has gained substantially as inequality has increased. The other suggests that populist parties – notably those with charismatic leaders – draw most heavily on those who have negative views on changes in society, feeling that the world is not the one they grew up and are comfortable in, with immigrants from different cultures being perceived as a major indicator of that change. The two overlap, of course: large-scale immigration has been experienced in many of the societies where globalisation and increased inequality have characterised recent decades. These are places where, according to Roger Eatwell and Matthew Goodwin in their book National Populism: The Revolt against Liberal Democracy, an increasing proportion of the population distrusts politicians, believes that their national identity and ways of life are being destroyed and feels relatively deprived, with a resulting electoral dealignment – they no longer vote for the party(ies) they have traditionally supported, if indeed they vote at all.

How to decompose the varying forces leading to these changes is the focus of Cultural Backlash, whose title alone suggests that its authors, Pippa Norris and Ronald Inglehart, favour the second of the two major arguments: populism and authoritarian leaders have attracted most support from those who view recent societal changes – multicultural cosmopolitanism, or what the UK Prime Minister Theresa May referred to as the views of ‘citizens of nowhere’ – negatively. In that, they build on their earlier work on cultural change, on the shift from a material-based to a post-material culture with its socially liberal values (the Silent Revolution of Inglehart’s earlier book from 1977). That shift is generational, and much of the empirical testing of their ideas is based on a classification of members of contemporary societies (mainly European, plus the United States) into four generations: Interwar (those born between 1900 and 1945); Boomers (1946-64); Generation X (1965-79); and Millennials (1980-96).

Cultural Backlash is a substantial book, drawing on a wide, heavily-cited literature to build its argument in a clear sequence towards a general conclusion that patterns of voting for populist parties across Europe, for such parties and Brexit in the UK and for Trump in the USA all show substantial intergenerational differences. The greatest support for populist-authoritarians comes from the – declining in size, both relatively and absolutely – older generations, set against their younger contemporaries who are more likely to favour post-material values and their related politics.

The book is in four main parts. The first – ‘Introduction’ – outlines the nature and varieties of populism and the authors’ cultural backlash theory. This is followed by ‘Authoritarian and Populist Values’, with chapters on the backlash against the silent revolution, economic grievances and immigration. European Social Survey data is used to develop populist and authoritarian/libertarian scales and statistical analyses explore variations along these to confirm, in the authors’ view, the arguments regarding generational differences and the cultural backlash (although when the patterns do not fit the argument – as with social trust – they are underplayed).

The next part – ‘From Values to Votes’ – tests Norris and Inglehart’s hypothesis that patterns of voting for populist-authoritarian parties are related to individuals’ positions on the derived scales. For the European data, this involved a classification of parties to identify those that can be defined as authoritarian-populist, and this is followed by statistical analyses that produce the anticipated generational differences – there are deep-rooted political divergences between old and young reflecting their differing values and attitudes – although the mediating effects of varying electoral systems mean that some populist parties are more successful than others in approaching power. There are then two further chapters, on Trump’s America – a cultural backlash played a major role in his success – and on Brexit in the UK. The latter reaches the same general conclusion – although it does not attempt to account for why Scotland and Northern Ireland both had Remain-voting majorities.

The final part – ‘Conclusions’ – explores the consequences of the cultural backlash as it erodes the ‘civic culture’ that had developed in the late twentieth century. Support for and satisfaction with democracy have declined in many countries, along with social tolerance and trust. Can they be restored? Must economic inequality be reduced; can cultural anxieties be assuaged (the latter argument is at the core of another recent large book, Eric Kaufmann’s Whiteshift)? We are given no answers. Liberal democracies have proved resilient but fundamental freedoms are threatened by authoritarian forces – and it remains to be seen how resilient liberal democracies really are.

Although Norris and Inglehart present a strong argument apparently sustained by convincing empirical (statistical) evidence, close attention to the details of their analyses raise substantial queries. For example, a number of tables (e.g. 4.7 and 5.2) show correlations, most of which are statistically significant and therefore interpreted as clearly supporting their arguments. But many of those correlations – we are not told if they are r or r2 values, but even if they are the latter, most are still very small – are statistically significant because they are based on very large samples (over 330,000 in some cases). With samples that large it is surprising that any of the correlations are statistically insignificant and other methods should have been deployed to establish whether the relationships are substantively important.

Secondly, their chosen approach to establishing whether the cultural backlash theory works uses multiple regression in which the first model includes just the four generations, which prove statistically significant – again unsurprising given the large samples – but the r2 values are mostly very low (less than 0.05 in many cases; in one place a correlation of 0.074 is termed ‘moderately strong’). Further models add extra variables representing class, education, religion, populist and authoritarian values, among others. As these are added, so the size and statistical significance of the generational variables declines, reflecting collinearity among the independent variables that is only weakly recognised: Generation X individuals are more likely to have degrees than those in the Interwar generation, for example. More sophisticated procedures were needed to tease out the true importance of the generational differences, therefore; just the introduction of interaction terms, for example, could have shown whether Boomer graduates were less likely than their Millennial contemporaries to display authoritarian tendencies – and the inclusion of odds ratios would have helped the interpretation.

This is a large and ambitious book, which would have benefited from pruning: too many tangents are followed in attempts to cover every eventuality. It certainly would also have been aided by more careful copy-editing – not least to reduce repetition – and checking: there are graphs with the vertical axis labelled % but the values on the ordinate are clearly proportions, and in one case (Figure 10.7) there are negative proportions (up to -0.5) who voted Republican.

Despite the importance of the subject matter, the depth of background and the potentially plausible theory, this is a disappointing book as a result. Much is done with the data assembled – exploring variations between as well as across countries, for example – but the empirical evidence is not convincing, perhaps because it has been organised to favour the authors’ own explanatory assumptions. It promises much – but delivers less.