In Respawn: Gamers, Hackers and Technogenic Life, Colin Milburn offers a detailed analysis of the entanglements of game cultures, political activism and the sociotechnical dilemmas of our present, drawing on a plethora of game examples and histories, online discussion threads and imagery. This is an engaging account that will be of interest to all those working at the intersections of digital media theory, game studies, political theory and science and technology studies, recommends Yana Boeva. 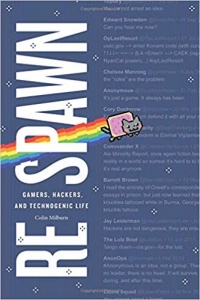 ‘All your base are belong to us.’ If you are an avid gamer, you probably know the phrase from Zero Wing well. If not, it might not make much sense to you besides its apparent grammatical errors. The phrase itself, as Colin Milburn explains, is a statement of technogenic life — that human society and culture become transformed through their technological encounters. This transfiguration through technogenesis, however, extends beyond the philosophical concept (see Bernard Stiegler and N. Katherine Hayles) into the emergence of new life-forms and synthetic organisms from within the technological systems of digital media and video games. The results of such possibilities and practices create technogenic life.

In line with Gabriella Coleman’s work on Anonymous, Milburn focuses on the multiple technopolitics and subject dispositions, including gamer, pirate, troll and geek, prompted within gaming cultures. With their technogenic qualities and experimental nature, gamer actions extend behind the contemporary present to point to potential futures. While drawing upon gaming and hacker terminology such as lulz, pwning and reload, there is but one term that captures the book’s topic in a nutshell: ‘RESPAWN’. Like other concepts in computer culture which are derived from analogues in organic nature, respawning refers to the ability to restore any game character after death or defeat. For Milburn, it is ‘a sign of the times, indexing the computerization of our biology, the vitality of our machines, and the convergence of video games with the molecular sciences’ (10).

Experimenting with games and media further reveals ‘diagrams of power’ (22). By knowing how to manipulate the hardware and software of a game, the player gets involved in political activism. The book explores these intersections of gaming, hacking and political culture through several stories and examples: the cultural contribution of early computer games such as Spacewar! and Adventure to hacker networks; the activities of Anonymous and LulzSec; the use of Portal to inspire action; the impact of the 2011 PlayStation Network outage; the 2012 City of Heroes termination protest by its community and all their connected media actions. Simultaneously, the subversive and speculative powers involved in gamer cultures, as Milburn argues, can also fall back into conservative behaviours, reproducing power structures and countering diversity. Attending to these inconsistencies is the book’s strength.

Hacking and gaming are close-knit activities. Of course, not all gamers are hackers, but perhaps all hackers are gamers to some degree. In Chapter One, Milburn traces how hacker practices have been shaped by early computer games and science fiction to the extent that the ‘fictionalization of science’ nurtures new forms of technogenic life. If governments and security organisations can surveil human action through technical means, then why can a virtual figure such as Nyan Cat not also reveal such practices? Human redemption and political subversion by way of hacking a game is how playing Adventure cultivated gamers (Chapter Two). Created in the late 1970s, the game played a pivotal role in training players to endure and look behind the surface. Adventure and SpaceWar!, according to Milburn, are examples of ‘subversion by design’.

While these games initiated technopolitical activities, it was only Portal’s (2007) narrative that enabled a close entanglement with hacktivism. In Chapter Three, Milburn focuses on how Portal’s storytelling and semiotics mirror real-life political structures, thus proving to be an excellent example of an ‘adaptive training device for resistance and protest’ (81). Drawing on several examples of aligned protests between Anonymous and the Occupy movement, Milburn demonstrates how games like Portal with their interactive fictions and counterintuitive stories allow players ‘to treat the world itself as a game’ (101).

Not all gamers are members of hacker communities though, and not all gamers are nerds. The 2011 PlayStation Network outage caused by a team of hackers revealed 77 million affected users, thereby making explicit the diversity of gamer biographies. Chapter Four discusses the multiple facets and speculations around this cyber-event that not only caused distress to the majority of its ‘regular’ users, but also catalysed suspicion about global technopolitical powers and the potential damage those could bring about. Players, as Milburn shows, also care about their community. In Chapter Five, he brings the example of the closure of City of Heroes (CoH), a massive multiplayer online game that was suspended in 2012 despite over 100,000 paying subscribers. Embracing the avatars of their beloved superheroes with their positive characteristics, the players started protesting within the virtual world of CoH.

Yet not all gamer actions lead to good deeds, as Milburn notes with the infamous ‘GamerGate’ example from 2014. Conspiracy theories about feminists wanting to destroy gamer culture being spread in 4chan and other forums had an actual negative impact in the physical world, much like the virulent spread of fake news in social media. For Milburn, therefore, ‘many different ideological positions and competing forces now situate themselves in relation to the discourse of high-tech superpowers—and they draw promiscuously from the same toolkits, employing all the same tactics and strategies’ (171).

Double standards, namely those of ‘green gaming’, are also the subject of Chapter Six. In this chapter, Milburn discusses the paradox of games with ecological themes and the simultaneous rise of rare metal extraction required for game hardware engineering and the resulting e-waste. He groups environmental games into three distinct modes: games that discipline us in a Foucauldian sense; games that allow us to control the environment; and games that nurture our environmental responsibility, shaping a technogenic connection built on empathy between the human and the nonhuman other. The penultimate Chapter Seven turns to the Japanese game Final Fantasy VII and the term ‘pwning’. Popular gamer theories hold that ‘pwn’ and ‘pwning’ are the result of a misspelling of the verb own. While broadly meaning the conquering of an opponent, ‘pwning’ also stands as a ‘quality of excellence, brilliance, and delight’ (199) formed by accountability to our own failures. As such, it describes the playfulness of gaming and the potential for learning from mistakes. For Milburn, Final Fantasy VII is ‘a relentlessly self-reflexive game that provides players with conceptual and affective resources to address the consequences of their own recreational pleasures’ (200).

Indeed, games can train us in many things, but in the sense of learning to fly on a flight simulator. They are digital fictions extending into our everyday present and informing political action. As Milburn concludes, they offer us ways to ‘save or not to save, to pwn or not to pwn, to spawn or to respawn’ (221). Respawn offers a detailed analysis of the entanglements of broader game cultures, political activism and the sociotechnical dilemmas of our present. Drawing on a plethora of game examples and their histories, online discussion threads and occasionally humorous imagery, the book is an engaging account for everyone working at the intersections of digital media theory, game studies, political theory and science and technology studies.

Yana Boeva, PhD, works currently as a researcher on creative processes in technology design and innovation at the LEONARDO – Zentrum für Kreativität und Innovation, Nuremberg Institute of Technology. Her research interests include critically-informed design, science and technology studies, media and information theory, digital fabrication, history of technology and feminist technoscience. She can be found on Twitter at @dropsmops