In Precarious Labour and Informal Economy: Work, Anarchy and Society in an Indian Village, Smita Yadav explores the life, labour and politics of a community of Sur Gonds in India’s central state of Madhya Pradesh. This well-researched and detailed book will have value for those interested in the changing lives of forest-dependent peoples in Central India and offers particularly insightful comments on education and welfare, writes Adam Runacres. 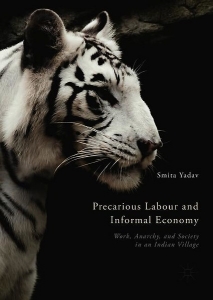 In Precarious Labour and Informal Economy, Smita Yadav explores the life, labour and politics of a particular community of Gonds in India’s central state of Madhya Pradesh. Her ethnography is located in Panna District, best known for its large tiger reserve, rich sandstone and diamond resources. Panna is part of the broader region of Bundelkhand which stretches between the states of Madhya Pradesh and Uttar Pradesh, historically part of the extensive Gond tribal kingdoms that covered large swathes of Central India before being taken over by Bundela Chiefs in the seventeenth and eighteenth centuries. During the British Raj, the district was part of the Bundelkhand Political Agency and formed part of Vindhya Pradesh upon Indian Independence in 1947 before joining Madhya Pradesh in 1956.

The community with whom Yadav conducted extensive ethnographic fieldwork is part of the Gond tribe found across India, and she focuses specifically on the lives of Sur Gonds, one of three sub-groups, and their engagement with the informal labour economy in Panna in their adaptations to economic and political change in the area. Gonds are often referred to as Adivasis, a term in Hindi vernacular meaning ‘original inhabitants’, applied to a wide range of different tribal groups across the country. They are also categorised by the Indian government as a Scheduled Tribe, indicating their lower caste status and (theoretical) access to particular state benefits set aside for historically disadvantaged groups. Throughout the book, Yadav provides an insight into the precarious character of Gond lives in Panna, focusing particularly on their engagement with the state and their changing economic activity. Her ethnography is a welcome addition to the study of the changing dynamics of tribal life in this part of India and the relationship between livelihoods, migration, labour, the state and kinship. Thus, the study touches on classic anthropological topics through a contemporary examination of one of India’s most vulnerable groups.

Yadav describes how Panna’s indigenous groups have historically been dependent on forest resources for their livelihoods. For tribes like the Gonds, this included gathering minor forest produce such as tendu leaves (used to make Indian cigarettes, or bidis), mahua flowers and seeds (used to make local liquor and for oil) and a wide variety of fruits like amla, achar and kaitha. The gathering of forest resources traditionally supplemented agriculture and informal labouring in Panna’s sandstone and diamond mines. However, since the founding of Panna National Park in 1981, these livelihood options have diminished. Traditional livelihoods have been severely curtailed, with grazing animals, gathering resources, hunting and chopping firewood now banned in forest areas.

Yadav describes the drastic impact of these changes on groups like the Gonds, resulting in migration to urban centres to work as labourers and increasing precarity in local work, with many now dependent on informal labour to make ends meet. However, Yadav argues that her interlocutors make use of informal labour to their own advantage, drawing on recent anthropological work on precarious labour and informality across the Global South. She sees the informal engagement with the economy and with politics as a form of adaptability and resistance to the discrimination and deprivation caused by the state, allowing Gonds to preserve many of their traditional institutions while at the same time sustaining their lives in new ways. In this way, their precarity is not simply diagnostic of a disadvantaged position, but instead a new modality of engaging creatively with unstable markets and invasive politics.

In the introduction to the book, Yadav aligns herself with ‘urgent anthropology’ to document the lives of Gonds ‘before [they] completely integrate and loose [sic] their unique cultural heritage and identity’ (2), also calling for a less Eurocentric view of work, family and economy in anthropological studies of labour and the state. What follows are two broad, descriptive chapters about the region and the study village of Mahalpur and the introduction of a number of key characters, such as Aditya, an educated young man who became Yadav’s assistant, and Leela Bai, a young widow who became her close friend. The strength of Yadav’s monograph lies in the detailed ethnographic descriptions in the three core chapters that follow the household, family and kinship (Chapter Four), labour and wages (Chapter Five) and the state and welfare (Chapter Six).

In the fourth chapter, Yadav’s description of women’s roles in Gond society is insightful, going to great efforts to explain the different ways in which women are truly at the heart of managing various social, economic and political demands placed on the community. Her intergenerational and household-based perspective is both familiar to studies of economic change and tribal communities and yet innovative in its attempt to capture complexity. The focus on women and livelihoods continues in Chapter Five, where case studies demonstrate the importance of flexible, informal work for the Gonds and the diversity of strategies even within a single community. Yadav also gives an insight into the rapidly changing landscape of employment in Panna, as families struggle to cope with the shift from forest-based livelihoods and labouring to city jobs and government positions within one generation.

Undoubtedly, the strongest analysis is found in the final chapter on ‘the state’. Yadav shows not only familiar realities of bureaucratic corruption and inefficiency, but also how particular government schemes like Below the Poverty Line (BPL) cards and the National Rural Employment Guarantee Act (NREGA) fail to reach their intended targets. Her description of schooling in Mahalpur is spot-on in its insight that ‘the exposure to urbanisation through television and the life outside of Panna make the young feel that schooling has no practical value as everything around them is changing, except for Panna’ (180). Everything from teacher behaviour to the timing of exams discourages Gond children and families from investing in education. The vulnerability of their lives demands intergenerational effort, immediate returns on labour and time investments and the flexibility provided by forest work and informal labouring.

The text moves between interests rapidly, from addressing large topics like ‘poverty’ and ‘the state’ to specific ethnographic phenomena like the effects of stone quarry labouring on her interlocutors’ bodies, indigenous healing and even shamanism and Hinduisation. Yadav sometimes intersperses discussions of literature and analysis with ethnographic vignettes awkwardly. Unfortunately, this can lead to a rather confusing read, in which the main thrust of a particular section is only resolved by the conclusion at the end of the chapter. The book also appears to have suffered from a distinct lack of close editing with regular grammatical errors, awkward language and even occasionally repeated groups of sentences. Sadly, this detracts from what is a well-researched, detailed and important study. One is left with the impression that the book may be trying to cover too much and this prevents the reader from settling into the ethnographic detail fully. That being said, the book has value for those interested in the changing lives of forest-dependent peoples in Central India, and its comments on the failures of education and welfare amongst those populations are insightful.

Adam Runacres is a PhD candidate in the Human Ecology Research Group in the Department of Anthropology at University College London (UCL). After returning from 15 months of ethnographic fieldwork, he is currently writing up his thesis on community conservation relations around Panna Tiger Reserve in Central India. His research focuses specifically on local people employed by the tiger reserve, and more broadly his research interests include anthropology of the environment, development, India, human-animal relations and anthropology of the state.