In Mixed Race Britain in the Twentieth Century, Chamion Caballero and Peter J. Aspinall critically investigate newly discovered archives, photographs, first-hand lived experiences and existing academic literature to present an unprecedentedly comprehensive history of racial mixing in Britain. This is an invaluable contribution to the study of the mixed race population in the British context, recommends Ivana Chen. 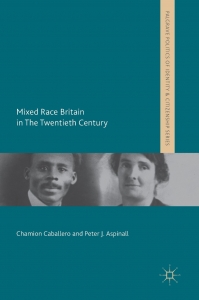 The birth of Archie Harrison Mountbatten-Windsor in May 2019 generated much discussion in the media surrounding the topic of ‘race’, following his parents’ royal wedding in 2018. On the one hand, we see articles celebrating the mixed race child of the royal family and the interracial marriage as indications of Britain’s confrontation with multiculturalism. On the other hand, the firing of radio presenter Danny Baker by the BBC due to his tweet apparently likening the royal baby to a chimpanzee, a racist trope, seems to have captured no less public attention. This kind of multifaceted, even contradictory, discourse around mixed race people in contemporary Britain, which can be traced back through the early twentieth century, is what Mixed Race Britain in the Twentieth Century aims to disentangle. Through critically investigating newly discovered archives and photographs, first-hand lived experiences and existing literature about the twentieth century, Caballero and Aspinall present an unprecedentedly comprehensive history of racial mixing with both insider and outsider accounts.

The term ‘mixed race’ is not unfamiliar to most people, but understanding the theoretical implications behind it is necessary when reading this book. Caballero and Aspinall inform their readers of where they stand in the wide literature on ‘race’ in the Introduction. Drawing on ‘racial formation theory’, Caballero and Aspinall use the concept of ‘racial projects’ to show the ways in which ‘race’ and interraciality are discursively constructed and negotiated depending on the socio-political context.

Moreover, Caballero and Aspinall adopt a clear position by using ‘mixed race’ over the many other terminological choices seen in public and academic discourses: for example, mixed-ethnic (as found in the UK census), biracial/multiracial (US census) and people of mixed parentage (Barbara Tizard and Ann Phoenix, 2002). It should be noted that from this viewpoint, the mixed race individuals surveyed in this book are the offspring of people of two ‘disparate races’ instead of all those who self-identify as mixed race; this is because mixed race individuals at the time may have defined themselves as black, as white or in other terms. That is to say, the more personal aspects of identity development and the social position of mixed race individuals are not the research objectives here. Rather, Caballero and Aspinall insightfully unpick the complex racial projects at play – that is, how mixed race individuals and interracial couples are racialised through time – by situating their lived experiences in wider social processes with reference to changing social, political and scientific views.

The authors’ main argument – that the lives of interracial couples and their mixed race offspring were just ‘an ordinary feature of British life’ – runs throughout the book (13). This conceptualisation of ‘ordinariness’ is supported by insider narratives, including first-hand lived experiences, that counter negative official accounts found in the media, governmental documents and previous academic work. The book deliberately traces the social history of racial mixing and mixedness, illustrating how and why those deemed ‘half-caste’ were pathologised, and how interracial unions suffered from moral condemnation due to the social, political and scientific climate. Following the decline of scientific racism between 1950 and 1979, the period 1980-2000, when the size of the mixed race population surged, witnessed a change in societal attitudes and the increase of insider-led academic research. Although structural racism and deep-seated prejudice still persist, racial mixing and mixedness have become more acceptable and even celebrated in Britain today.

Amongst the various kinds of mixed relationships, the unions of white women and black men have been the most frequently scrutinised and condemned in the public sphere, the arts, literature and, more importantly, by the British government. The book critically underlines the largely problematised unions of white working-class British women and men of colour during the time period. It highlights outsider views of ‘deviant sex’ occurring between those in an unbalanced racial power relationship, and the fears of ‘degenerate’ mixed offspring. Thus, this type of union was targeted for elimination by governmental policy. For instance, the Home Office repatriated Chinese seamen to places including Singapore, Hong Kong and China following World War Two, including some who had British-born wives and children (see Chapter Seven).

Furthermore, Caballero and Aspinall indicate that mixed race relationships are more than just a ‘race’ issue, and the rich findings in this book effectively support the view that ‘race’ intersects with other social categories, in particular gender and class. Despite the hostile climate of the times, white middle-class British men were allowed to partner with women of colour, or at least tolerated when doing so. The responsibility of reproducing and passing on the great British nation was imposed on white women specifically. The intersection of ‘race’, class, nationality and gender is therefore evident; however, ‘race’ plays the master role in this intersection of multiple social categories. Chapters Seven and Eight perfectly illustrate this through the British government’s differential treatment of the children and families of white American servicemen and those of African American servicemen and Chinese seamen. Employing the concept of intersectionality can therefore allow us to further interrogate the multiple layers related to racial mixing. Take the winning book of this year’s BSA Philip Abrams Memorial Prize for example, in which Remi Joseph-Salisbury uses the term ‘black mixed-race men’ to demonstrate the intersection of racialised identity and gender. This growing direction calls for more exploration in future research concerned with mixed race populations.

Mixed Race Britain’s major contribution lies in its ability to balance the official/public accounts of racial mixing and mixedness with the personal accounts of mixed race people, their families and their friends, inspired by the lacuna addressed by earlier researchers. This valuable insight notwithstanding, it is important to reflect upon the methodological approach of this research; here, I suggest also reading Suki Ali’s article (2012) about the strengths and limitations of utilising memory work and auto/biographical methods together. Ali’s paper carefully examines the ‘private’ accounts of mixed race siblings (of whom she herself is one) growing up in twentieth-century Britain, specifically the 1960s and 1970s, to show ‘how narrative accounts are often negotiated through multiple senses, revealing them as both imagined and recalled, contested and negotiated’ (88). She illustrates how collective memories at the national level can be inconsistent with individual memories at the familial level.

This is not to say that we should thereby discredit works employing methods like oral history and narrative interviewing, as these are vital in research on people’s experiences of racial relations. By showing us insiders’ perspectives, Caballero and Aspinall have done a genuinely good job at contesting problem-oriented sociological research built upon outsiders’ often stereotypical views of the twentieth-century mixed race population. Nevertheless, when we read the retrospective accounts which support the ‘ordinariness’ of mixed race people in Britain, we should also recognise the negotiable nature of narrative accounts, such as the multiple ways in which people can make sense of their memories, as well as how people position themselves when narrating what they consciously know. Therefore, it might make sense that mixed race people growing up in the twentieth century did not link their personal experiences to ‘race’ and racism in larger social processes. It might also make sense that when narrativising their childhood experiences, those who are seen to be from ‘non-normative’ family backgrounds chose to fit in with ‘normative’ and acceptable discourses (Ali, 92).

Mixed Race Britain is also limited in its scope in only looking into relationships between white and non-white (mainly Black and Chinese) people, as the authors explicitly admit in their book. Caballero and Aspinall have also pointed out that visibly mixed race individuals are the primary focus of academic investigation. The wider scholarship in mixed race studies – in both the UK and the US – also suffers from these difficulties of scope. The mixed unions and children of two non-white persons have generally been overlooked by both the general public and academics alike. While the size of such populations is relatively small, their members are not always less visible. Indeed, the limits of this emphasis on a particular kind of visibility actually speak to the underlying black/white dichotomy in Western societies, which even influences academic research. As long as the mixed race person is not seen to be crossing the ‘colour line’, it seems there is less to be wary of politically, culturally, economically and so forth.

Overall, the book is an invaluable contribution to the study of the mixed race population in the British context. It may well become a classic reference for academics working in this area, as well as for people who are simply interested in the histories of this fast-growing population in Britain. For a more general readership, research by Caballero and Aspinall also formed the basis of the digital archive Mix-d Museum and the BBC2 series Mixed Britannia, which draw on the same archives and are accessible online.

Ivana Chen is a PhD researcher in the Department of Social Science at University College London (UCL). Her doctoral project investigates the identity (re)formation of Singaporeans of Chinese origin by examining their transnational lived experiences in Singapore and London. Broadly she is interested in studies of ‘race’, ethnicity and migration. You may find her on Twitter @yclivana.