In Imperial Intimacies: A Tale of Two Islands, Hazel V. Carby explores the imperial connections between the UK and Jamaica and their impact upon the lived experiences of individuals, positioning family memories and histories as a starting point for telling a broader story about constructions of Britishness. The book is an exceptional account of the intimate and intricate relationships between geographical, economic, social and personal spaces created under British colonialism, writes Manuela Latchoumaya. 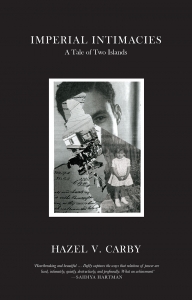 As she was growing up in Imperial Britain, ‘The Girl’ got used to being asked ‘The Question!’: ‘Where are you from?’. The daughter of a white Welsh mother and a black Jamaican father, Hazel V. Carby explores the nature of the imperial connections between the UK and Jamaica – as well as their consequences for the lived experiences of individuals – in a detailed account she refuses to call a memoir, instead positioning family memories and histories as a starting point for telling a broader story about constructions of Britishness. A Professor Emeritus of African American Studies, Carby demonstrates that British colonialism and imperialism have created intricate relationships between geographical, economic, social and personal spaces.

In the first part of Imperial Intimacies, ‘Inventories’, the author begins by contextualising the encounter between her parents. Iris Leaworthy and Carl Carby met in the early 1940s at a dance organised for men from the local Royal Air Force (RAF) stations. At that time, Iris was a civil servant in the Air Ministry, while Carl was an Airman in the RAF. Interestingly, Carl and Iris were already indirectly linked by a common practice before their first encounter in the heart of the imperial metropole – the celebration of Empire Day every 24 May. Iris’s Welshness did not compromise her sense of Britishness, and she regularly celebrated Empire Day when she was in school. In Jamaica, Carl also celebrated this national holiday instituted in schools in 1902. He sang the same songs as Iris and wore the Union Jack’s colours while being taught how to be a ‘Little Black Englishman’.

Iris always praised herself for being the only woman who would dance with Carl – her encounter with a black Jamaican man made her conscious of her whiteness and of the power it gave her over Carl. Years later, during their marriage, she would forbid Carl from cooking traditional Jamaican food and would only allow him to assist her in the kitchen in the preparation of English meals. Although this happened after Carl’s suicide attempt by putting his head in the gas oven, the kitchen can be regarded as a metaphor for Iris’s power over Carl. This part of the house was always ruled by Iris, and Carby believes that her father’s decision to try and take his life in the kitchen was not coincidental.

Carby uses her parents’ story to illustrate the ways in which British imperialism led to particular encounters between racialised bodies – those of white women and black men. Most black men in Britain had served during World War II – for example, the majority of passengers of the Empire Windrush, which disembarked on the Thames estuary on 21 June 1948, were returning servicemen. Their presence was, however, unwanted. The Colonial Office envisioned the repatriation of the black populations who had settled in British ports when the war ended, which Foreign Secretary Anthony Eden justified by the pernicious assumption that the ‘British climate badly suited negroes’. The marriage of Carl and Iris was thus perceived as a provocation and as a threat to the governance of Empire.

The perception of sexual relations between black men and white women as a moral issue led to the ‘Brown Babies’ debate of the 1940s. Academics such as Rachel Fleming and Muriel Fletcher undertook anthropometric studies that sought to explain differences in mixed-race children through biological measurements. In a report published in 1930, Fletcher concluded that ‘half-caste children’ could not be ‘absorbed in [British] industrial life’ and that this was leading to ‘grave moral results’. In this context of rampant racism, Carby’s claims of Britishness could be seen as an act of rebellion, as being black and British was perceived as a contradiction in terms in the 1950s.

Indeed, ‘The Girl’ was regarded as a liar by children and adults alike when she declared that she was British and from Folly Gate in Devon. She was often asked ‘how she got there’. Even her mother would adopt racist behaviour by insisting that her daughter was ‘not coloured’. When she recounted her father’s story in class, her professors told her that there were no ‘coloured’ people in Britain during World War II and publicly humiliated her by stating that no such people could have served in the RAF, the most elite branch of the British military. She was also taught that Britain had stood alone in 1940 against Nazi Germany – although recruitment for the RAF had begun in Jamaica in 1942, and nearly 12,500 volunteers from the Caribbean had participated in the war. Carby consistently refers to herself as ‘The Girl’ throughout the book, perhaps as a way to emphasise the detrimental impacts racism and rejection have had on her self-esteem. She repeatedly mentions ‘The Girl’ as a shadow of the woman she has become: ‘the girl I no longer recognize, the girl I have long since left behind, the girl I discarded and rejected’ (22).

In the later parts of Imperial Intimacies, Carby tracks the history of her ancestors. Her thorough search in the archives leads her to Bath and Bristol, the respective birthplaces of her maternal great-grandmother Rose and of her maternal great-great-grandmother Rebecca. The author shows how the wealth of these two cities came from enslavement and colonial oppression. For instance, some of the richest Bristolians had interests in the plantations of the Caribbean and Virginia in the late seventeenth century. By the late eighteenth century, at least 40 per cent of Bristol’s wealth derived from activities sustained by the slave system. In particular, sugar, tobacco and cocoa were crucial to the city’s economy. Carby also stresses the mechanisms of economic compensation that followed the official abolition of slavery in 1834. For instance, the British Treasury gave William Thomas Beckford, a slave owner from Bath, £12,800 in compensation for the loss of his ‘property’ – 660 enslaved human beings in Jamaican plantations. Moreover, former enslaved people had to continue working as apprentices for 41.5 hours a week for the ‘customary’ considerations – food, clothing, housing and medical care – they had received when they were enslaved.

The author’s archive search finally brings her to Lilly Carby, a slave owner from Lincolnshire. Carby was sent to Jamaica alongside two of his cousins in 1788 by the British army. At the time, the British government was encouraging white people to settle in Jamaica – several Parliamentary Acts were passed in the eighteenth century. Indeed, as black people outnumbered white people, the government feared the possibility of black rebellion in the plantations. Lilly Carby acquired later a coffee plantation he renamed ‘Lincoln’. There, he endeavoured to recreate the life he had in Lincolnshire by renaming some of the people he enslaved with the names of the relatives he had left behind in England. Thus, in England, John, George, Dick, James and Bridget were Lilly Carby’s white and free relatives. In Jamaica, however, they were his black and enslaved ‘properties’. Lilly Carby also raped several black women and gave their children the names of his parents. Carl Carby, Hazel’s father, is himself a descendant of Lilly Carby. This is why the question ‘Are you from the black Carbys, or from the white Carbys?’ oversimplifies the realities of plantation life and their impacts on contemporary Jamaican society.

The connections created by the forced encounters between white owners and black enslaved people, and the subsequent ones between white women and black men who had come to defend what they were taught was the ‘Mother Country’, led to the ‘imperial intimacies’ Carby describes in her book. These meant that the imperial metropole shaped what was happening in the colonies – physical and psychological forms of oppression – as citizens from the imperial peripheries also shaped occurrences in Britain – such as by contributing to the wartime effort and by settling in a country they had helped to reconstruct after the war. Carby’s book is an exceptional account of such intimacies, and she manages to explain them in an original and uncommon way. By using examples from her own background, she brilliantly demonstrates that ‘the personal’ is indeed political.

Manuela Latchoumaya is a Sciences Po and LSE graduate in EU Politics. Her academic interests include postcolonial, nationalism and Islamophobia studies, as well as debates around the remaking of national identities.