In the award-winning book The Global Interior: Mineral Frontiers and American Power, Megan Black traces the activities of the US Department of the Interior from its founding in 1849 to the 1980s, showing how a government organ best known for managing domestic natural resources became a key site of soft power that supported and projected American power globally, particularly enabling the extraction of mineral wealth. This is a valuable contribution to the study of American foreign policy, imperialism and exceptionalism, writes Thomas Furse, and will also add to debates concerning the conflictual relationship between environmentalism and capitalism. 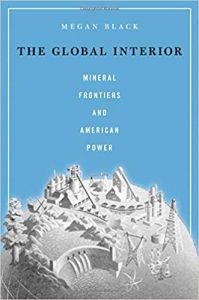 Megan Black’s The Global Interior: Mineral Frontiers and American Power reveals a fundamental paradox in American global power—its imperial stature and its anticolonial legacy. From its founding in 1849 to the 1980s, the Department of the Interior has both ensured and obscured this powerful ambiguity. It played a pivotal role in facilitating the extraction of mineral wealth, rolling back environmental regulations and expanding the frontier to the seas and then into space. But the Department also developed water sanitation and irrigation in the Global South, promoted better agricultural methods, geological exploration and conservation programmes for soil, wildlife, forests and rivers. The Interior practised hard and soft power.

Black argues that the Department’s benevolence and conservationist actions were used as covers for the real desire of extracting mineral wealth. ‘The military-industrial complex and culture of consumer abundance converged to intensify federal anxieties about America’s mineral solvency’ (122). The choice of words is apt. Underlying much of this book is a sense of anxiety within American foreign policy—whether it’s the anxiety of white settlers holding onto land in the nineteenth century, fears that Latin America could withhold minerals during World War II or turn communist in the Cold War or the alarm that OPEC states could limit oil and gas production causing a spike in prices. We see that the Interior’s ‘mineral technocracy’ was foundational in maintaining American power projection across the globe.

This book covers the Interior from 1849 to the 1980s. Its origins were rooted in the development and subjection of the American West in the nineteenth century. To its founders it was a ‘passive administrator’ or a ‘civilian antidote to military power’ to harness the strength of the interior. Black shows that domestic political shifts allowed the department to change its cover, while mineral extraction remained a central focus. The two most important episodes of this were under Franklin D. Roosevelt in the 1930s and, 50 years later, under Ronald Reagan. In the first instance, the distant rumblings of Nazi Germany and Imperial Japan shocked American officials into developing a military industrial preparedness. In the 1980s, maintaining supreme military dominance over the Soviet Union became an organising principle that carried deregulation to ease mineral extraction.

Roosevelt’s Good Neighbour Policy in 1933 encouraged the United States and Latin America to build a more equal and agreeable dialogue. It was designed to scale back the domineering rhetoric and militarism of the Monroe Doctrine, which set US dominance in the Americas during the nineteenth century, as opposed to the European empires. The reason for this change was that American industry needed minerals to fight the looming twentieth-century wars in Europe and Asia. The previous blunt rhetoric became a liability to obtaining the minerals. However, rather than a sharp break, Roosevelt’s Good Neighbour Policy became a more efficient Monroe Doctrine. Black aptly puts it: ‘cooperative mineral programs, in short, were the neighbourly way to do extraction’ (86). Thus, the Interior was never a civilian counterpoint to the military, but instead worked beside it.

Reagan’s election in 1980 tacked the Interior to secure minerals through deregulation. He appointed James G. Watt, a conservative libertarian, to lead the Department and spearhead an anti-welfare and free-market agenda. Watt dismantled environmental regulations so private companies could maximise profit, and lukewarm criticism was met with his extremist rhetoric. He blamed the poverty on reservation lands on the ‘cultural deficiencies’ of Native Americans, shielding the federal welfare cuts (240). This politics had a backstory. In the 1960s, Lyndon B. Johnson pressed the Interior to expand offshore drilling and ignore environmental risks. This helped cause the 1969 Santa Barbara oil spill off the coast of California that received international attention. The only side criticism here is that the book just touches the surface of the role conservative politics played in shaping the free-market and environmental politics that helped set up Reagan’s victory.

Nevertheless, the book features individuals who have only been partially covered or missed in the history of the American empire. Stewart Udall, the Interior’s secretary for eight years in the 1960s, saw the Department engaged in leasing out reservation land for extraction, and establishing conservation projects around the world. The development of nuclear weapons, the space race and 1960s consumer prosperity would have been impossible without the Interior and Udall’s stewardship. His international tours, often to the Global South, helped to fuse strands of America’s power. This power projection came from combining the soft power of conservation with the hard powers of industrial extraction. There was a tension between Udall’s conservationist politics and agitation on a federal level that America needed more minerals to sustain its economic and military model.

We see this model rework itself in the American West during the 1980s. Chapter Seven focuses on the wealth underneath the Native American reservations. The Council of Energy Resource Tribes (CERT), known as the ‘Indian OPEC’, cleared a middle path by accepting mineral extraction on reservation land, but sought a greater share of the wealth from it. To better its negotiating hand with the Interior over reservation lands, it drew on close relations with OPEC nations and even Iran. Initially, the Interior barely registered this international relationship between a non-state actor and foreign states.

This, Black argues, reveals a founding myth of the Department—its denial of a global role. The American West was an internal colony that became a blueprint for the US in Latin America, Africa, Asia, the ocean and even in space. The Interior parcelled out frontier land, administered parts of Alaska and Hawaii before statehood, and the Caribbean and Pacific islands, too. The racial history of conquering the West shaped US legislation and attitudes to Filipinos, Cubans and Puerto Ricans (40). ‘Minerals were thus not just a straightforward motive for expansion, as historians overwhelming suggest; they were also a vital means for it’ (6). Each conquest led onto the next.

A host of recent books has looked into the nature of the American empire and its exceptionalism. Black reads that the Interior doesn’t sit easily as an instrument of soft or hard power. Although soft power was used as a cover, it did have tangible benefits for the US and the developing areas. This feeds into a broader point about American foreign policy: the oscillation between, and sometimes simultaneous expression of, benevolent cooperation and nationalist unilateralism. The Global Interior adds to this debate in that it brings us to see that cooperation and unilateralism is not an either-or argument. The two can consolidate into a single strategy that moulds global power projection. The US willingly engages in multilateral endeavours regarding space, the continental shelf and international law. And America also turns unilateral, usually for economic gain, to exempt itself from international burdens and regulations.

Chapter Five is particularly engaging on this point about the choices the US had on the continental shelf. Harold Ickes, the Interior’s head from 1933-46, pursued a policy to annex the submerged coastal lands around the United States. International convention saw the shelf as the commons. Nevertheless, US consultations with several coastal nations elicited positive feedback, and so President Harry S. Truman in 1945 signed the declaration: America owned the submerged areas and could begin drilling for riches. The US didn’t ratify UN treaties in 1956 and 1982 on the law of the sea either. It decided instead to unilaterally mark out a slightly larger portion than that specified in the treaties. Even now voices urge US non-compliance with UN treaties. There is even an interagency task force to expand the US continental shelf again.

The Global Interior comes at an important moment when technology and minerals will play an increasingly vital role in international politics. It can help us understand the thinking behind the suggestion of purchasing Greenland, American anxiety about securing rare-earth elements, the rolling back of environmental regulations for drilling, deforestation and mining in public lands. This book comfortably sits with other historical and international politics scholarship on American foreign policy, and it can contribute to an ongoing debate on the conflictual relationship between environmentalism and capitalism, too.

Thomas Furse is a PhD candidate at City, University of London. He is researching American foreign policy related to geopolitical thought and military strategy.