In The Archive of Loss: Lively Ruination in Mill Land Mumbai, Maura Finkelstein confronts the assumption that the city’s textile industry is a relic of the past, instead showing how the ‘lively ruins’ of the mills are experienced by those who live and work in them. This gripping book will be enriching reading for all those interested in the processes and experiences of deindustrialisation in the Global South, writes Sinead D’Silva. 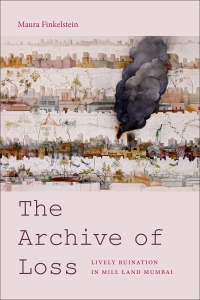 During my childhood, a joke that played on puns using the names of various companies amused many. It went something like this:

When I was an undergraduate student in Bombay (Mumbai), this seemed to take on a different meaning for me, hinting at the (de)industrial history of the city. Maura Finkelstein’s The Archive of Loss: Lively Ruination in Mill Land Mumbai is an enquiry into the (relatively recent) status of the mills in Mumbai. As the common narrative sits, the city had been through deindustrialisation and is now post-industrial. The mills were a key site through which this process was evident – or considered so anyway. Following the Great Textile Strike of 1982-83 and mysterious ‘accidental’ fires since 1965 until 2006, claiming every mill in the city (most were later redeveloped into residential complexes or malls), the textile industry was pronounced dead.

Finkelstein’s book calls into question – even confronts – this assumption presented through representations of the decline of the textile mill industry in Bombay, or present-day Mumbai. A distinct contrast appears as the author compares (re)presentations of the mills (through movies, museum exhibitions by civil society groups, political presentations and mill-owners) that create mythologies of the industry with the stories of the lived experiences of those working in a functional textile mill. Finkelstein demonstrates that the mills as sites of production are not all dead, even if they are in the process of decay. Herein lies a contradiction of the city and the people within it.

Drawing on ethnographic fieldwork undertaken as part of the author’s PhD research during the period of 2006 to 2009 – with a focus on the last two years – the book presents the experience of workers employed in a mill in the heart of the industrial area of Mumbai: Central Mumbai. Finkelstein is motivated by an objective to expose the issue of ‘misrecognition of Central Mumbai’s textile industry […] of presence for absence’ (16) and thus re-present the story of the mills as it is known and lived. The impact of this contrasting narrative of death/lively ruination of the mills is presented through five key sets of ‘archives’ (of knowledge): namely the Archive of the Mill; the Archive of the Worker; the Archive of the Chawl; the Archive of the Strike; and the Archive of the Fire. In so doing, Finkelstein embarks on a monumental task. Through each archive, we are reminded that the mills are alive and kicking – even if only just. These archives are not just of the mill and other associated sites, but rather of the city.

Image Credit: Crop of ‘The crowd’ by anarchytecture licensed under CC BY 2.0

As the book progresses through its ‘Archives’, Finkelstein makes a very clear case for a toppling over of the current way in which the mills are understood, propounding a shift in the narrative of the deindustrialisation of Mumbai towards viewing it as alive. I begin to wonder if this can perhaps be done beyond just the mills. The book offers a real challenge to the way in which deindustrialisation in this megacity through the mill workers is framed not only in scholarship but also in the public imagination through civil society groups, media and so on.

Rather than go through each of the chapters of the book, which are very succinctly presented in the Introduction, I wish to highlight two aspects through the Chapter-Archives that are compelling about this book: this goes beyond the novelty of presenting millworkers with considerably more agency than is often afforded to them. The first key concept that can be relevant beyond anthropological thinking is the notion of ‘queer chawl time’, or rather the anachronism that exists within the housing spaces built specifically to house migrant labourers for the textile industry. Although the rest of the city is presented as globalised and modern, the chawl acts as a space where the notion of progress is challenged through a different experience of time. Here, destruction, rebuilding, materiality, memory, communal living, the idea of home and domestic space are but a few aspects that influence how time is experienced within chawls.

Of all the chapters, the fourth appeared to me as being the most striking (excuse the pun), though the argument and content are built up through the preceding chapters. In Chapter Four, Finkelstein confronts truths and untruths about the strike and how it was experienced by mill workers. Here, the unifying identity of the mill worker is challenged as disparities between migrants from different parts of the country are revealed in all of their complexity. The God-like imagery surrounding the charismatic leadership of the Great Textile Strike of 1982-83 and the Strike itself are seen very differently by Maharashtrian and North Indian workers. This communal and regional tension is rather unsurprising, but the way in which Finkelstein uses this to make sense of the wider failure of the Strike is where this chapter presents an important way of thinking. Both Maharashtrian and North Indian participants are revealed as exaggerating their stories – the former about the success of the Strike and the latter about vulnerability and victimisation as a result of it. Finkelstein reflects: ‘I have grown to see how this form of storytelling is generative, even if it is also understood as factually inaccurate’ (114). Instead, thinking of behaviour through the lens of affect renders the stories as capable of patching together a better understanding of the sentiments associated with the Strike, keeping with the idea of this being an ‘archive’.

In many ways, Finkelstein’s work is very refreshing. It is not at all simplistic nor does it focus on ‘one issue’ to tell the story. The data involved is rich, and the theoretical framings and arguments very persuasive, though sometimes it verges on over-indulgence in patching together a number of sources in a somewhat bric-a-brac nature (though this could possibly be the style of anthropological writing). Here, the footnotes are essential to understanding the underlying intention of what could appear as mere claims, and sometimes it may feel tedious to have to flick to the back of the book to know more. The book itself, however, is narrated through a gripping form of storytelling: in many ways it is reminiscent of a thriller novel as the various layers of the story are revealed. For me, some topics were not confronted as well as they could have been, such as caste – all the participants, though workers in the class sense, were high-caste/savarna. On reflection, Finkelstein defends this presentation as respecting the interlocutors who themselves tell her not to ask about it (131). Instead, the manifestation of caste is presented in subtle ways throughout the book.

The Archive of Loss side-steps some of the confrontational questions surrounding development and deindustrialisation, such as assertions of the inequalities and differential impact of such changes on people, often in an absolute sense. Instead, it asks questions about the obvious: the lived reality of those who are revealed as having been ignored or rendered invisible by the aforementioned claims. The book is enriching for anyone interested in deindustrialisation in the Global South. It presents the complexity of the context exceptionally well as it incorporates various themes that may seem bewilderingly unfamiliar to others who have not experienced it, for which Finkelstein rightly makes no apology.