In Dead Labor: Towards a Political Economy of Premature Death, James Tyner offers an urgent examination of the extraction of surplus value from the death of labouring bodies. While the book does not discuss the histories of slavery or the effects of the truncation of life upon reproductive labour, it is a fluent, accessible and illuminating read that should stimulate consideration beyond the US context of the complicated network of social relations sustaining the devaluation of life under capitalism, writes Debolina Majumder. 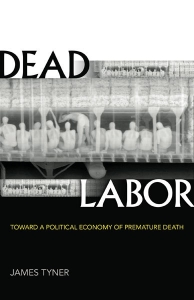 Let us consider a series of developments in recent US history. In 2017 Hurricane Maria all but destroyed the social and physical infrastructure of Puerto Rico, whose constituents continue to suffer from preventable disease due to the lack of adequate federal assistance. Since the 1980s, absolute declines in the incomes of Black and Hispanic families across the US have coincided with higher mortality rates and a widening gap between the life expectancies of racialised and white populations. The adoption of increasingly militarised, ‘preventative’ strategies of regulating the US-Mexico border since the 1990s, although ineffective in reducing the number of undocumented migrants in the US, has led to a greater loss of human life while crossing the border. At the same time, corporate-owned life insurance (COLI) programmes, instated in the 1980s and 1990s, continue to allow companies to secure low-paid non-essential workers as insurable interest and draw death benefits upon their demise, even after their termination or retirement. Lastly, an immense demand for organ transplants in the US and the rest of the Global North has produced a bio-market for body parts, where practices of organ tourism and vending provide opportunities for impoverished ‘donors’ to sell their organs to pay off debts. What links together these tragedies? According to James Tyner’s latest book, Dead Labor, the answer is a ‘new political economy of premature death’, or an emergent ‘necrocapitalism’ in which living labour is increasingly transformed into the dead.

At a time when discourses on the declining significance, increased precariousness and the possible extinction of labour in the so-called post-industrial world abound in scholarly and political discussions, Tyner compellingly and complementarily urges us to embark on an examination of the extraction of surplus value from the death of labouring bodies. This is also one of the contexts in which Tyner situates his book, arguing for the ‘need to take seriously the production of premature death as foundational to the conditions of precariousness and precarity’ (10). To Tyner, it is not that living labour has ultimately been replaced by the dead, but that in the present day the ‘pervasive indifference to surplus or redundant bodies is matched only with a nascent preference toward the profitability of dying or dead bodies’ (xiii). Dead Labor takes an embodied, labour-centric approach to understanding the politics of premature death and structural violence in society – and this is one of its greatest strengths. It provides a much-needed alternative to fetishised analyses of financialisation which reify capital’s own claims about its capacity for self-regeneration and valorisation by erasing the labouring subject.

To answer the question of why and how some people are more valuable dead than alive, Tyner invokes a literal interpretation of Karl Marx’s concept of dead labour. While Marx metaphorically referred to dead labour as the labour expended in the past or embodied within a particular object, Tyner’s concern is with the ‘material death’ of labour – the specificity of a particular mode of production to forms of death within society. In advancing this argument about the emergence of death as another site of capital accumulation, Tyner charts the permutations of the labouring subject alongside the devaluation of productive life through each of the five chapters of the book. These ‘figures of dead labor’ embody the material conditions and realities of death in our society – living, commodified, surplus, redundant and disassembled. At the heart of Tyner’s analysis thus is a concern not only with the profitability of death in an era of incipient ‘necrocapitalism’, but also with the stratified experiences of mortality which undergird this profitability. Although we are all mortal, some are more vulnerable to having their lives cut short, their deaths rendered profitable and being held culpable for their own deaths, and this has as much to do with the socioeconomics of inequality as it does with any biological predisposition toward premature death.

Dead Labor is a conceptual extension of Tyner’s previous work on the political economy of violence. Tyner, a productive and prolific writer, expands upon a series of articles published between 2013 to 2016 which complicate notions of structural violence by ascribing intentionality to the abrupt truncation of life under capitalism. Additionally, he develops arguments made in Violence in Capitalism: Devaluing Life in an Age of Responsibility (2016) on the processes through which agency is extricated from the market logics of ‘letting die’ and massive casualties of poverty and malnutrition are subsequently banalised. Tyner’s granular analysis of the ‘figures’ of death in Dead Labor effectively alerts us to the more-than-typological variegation of precarity and premature death in the world today – and to the often similar but always contingent realities of the nebulous concept of ‘global precarity’ which must be situated in both time and place.

Despite this, there seem to be a few missed opportunities in the text. The first – perhaps most glaringly in the context of a book which almost exclusively focuses on labour, living and dead, and American capitalism – is the omission of any discussion on slavery. As Dainey Ramey Berry writes in her fascinating analysis of enslaved mortality, ‘at every point and every stage of their lives, enslaved people had an appraised value, a suggested price tag for their bodies. They also had a value in death’ (98). Ramey Berry calls the economic valuation of slave labour which extended beyond the enslaved person’s mortal lifecycle and into postmortem space, ‘ghost value’ (7). Particular parallels emerge, for instance, between Ramey Berry’s discussion of how slaveowners attempted to maximise value by recovering compensation for the financial loss of purchased slaves to murder, explosions and suicide, and Tyner’s discussion of COLI and the processes of biofinancialisation in which redundant labour is rendered profitable after death. One is thus left wondering how these prehistories of modern-day biocapitalism might affect Tyner’s argument about this being a ‘new form of violence’ based on anticipatory death (102).

Secondly, Dead Labor raises some implicit but unanswered questions about the effects of the truncation of life on reproductive labour. While death seems antithetical to reproduction at the biological, generational, class and mode of production levels, Tyner writes that ‘some laborers may die with no major disruption to the system as long as the class as a whole continues’ (38). What remains unclear, however, is the implication of this for housework, caregiving or the various other forms of reproductive labour that women typically perform in society. When Tyner states that ‘productive life itself is devalued’ (101), we are left unsure of how this coincides with transformations in the dynamics and valuation of reproductive labour. In short, to the question of how the disassembly of the labouring body and the capitalisation of the embedded value of the life form and individual body parts have affected women’s performance of life’s work, Tyner provides no answer.

These critiques, however, do not diminish the effectiveness of Tyner’s argument. Dead Labor is a fluent, accessible and illuminating read, and will be of interest to scholars of labour, health, borders and carcerality. One hopes that it will stimulate discussion beyond the American context of the complicated network of social relations which sustain the devaluation of life under capitalism.

Debolina Majumder is a PhD candidate in the Department of Geography at the University of Cambridge. She received her bachelor’s degree in History and International Relations and her master’s degree in Geography from the University of British Columbia, Canada. Her doctoral research grapples with the transitory but recurring urban landscapes within which migrant construction workers continue to work and live in Delhi and asks how the transience and informality of construction labour (and work) is reproduced in and through urban space.