In America’s Covert War in East Africa: Surveillance, Rendition, Assassination, Clara Usiskin offers an analysis of the impact of the ‘War on Terror’ in East Africa, painting a grave picture of its effects. This is an informative and well-written read that shows how counterterrorism operations and policies have created national and regional security apparatuses that have become tools of authoritarian regimes and used to silence civil dissidence, writes Courteney J. O’Connor. 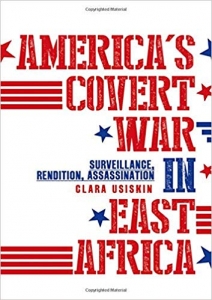 It is made immediately clear that Clara Usiskin’s new book, America’s Covert War in East Africa, is not intended as an academic security text nor as any sort of official history of the issues and regions that her book explores (1-5). In her career, the author has come to specialise in understanding the impact of the ‘War on Terror’ (WoT) in the East African and Indian Ocean regions: specifically, how it has affected and influenced those who may have been overlooked or under-considered in policy creation: minority groups, refugees, human rights defenders and others (5).

The initial chapter of the book, ‘A Zanzibar Ghost’, is a shocking and emotionally charged account of the experience of a Zanzibari man who was rendered and interrogated by US personnel as part of the WoT. Rendition is the practice of one state ‘surrendering’ a fugitive or suspect to another state for the purposes of interrogation. In the post-9/11 era, the term ‘(extraordinary) rendition’ has come to mean the (often illegal) movement of terrorist suspects from a country of detainment to another site for interrogation; the secondary site is usually known for its disregard for the requirements of humane treatment or human rights in general.  The combination of Suleiman Abdallah’s personal recollections, Usiskin’s narration and the coldly analytical policy/memo excerpts offer a rather chilling description of what happens to high value detainees (HVDs) with no apparent evidence as to the actual value of the intelligence the detainee is alleged to have, in a brutal and blunt introduction to the extrajudicial practices that have occurred during the global WoT.

The subsequent chapter, ‘The Spider’s Web’, discusses the network of extrajudicial and/or military prisons/black sites that were used for the detainment and interrogation of so-called HVDs. While not as bluntly descriptive as the first chapter, the details and writing style continue to emphasise the inhumane treatment suffered by the individuals discussed. The lack of responsibility taken by any (state) party following these individuals’ release (those who have been released) has contributed to ongoing mental health concerns (33-34).

An extremely contentious element in the (recent) history of rendition, and more specifically the UK involvement with US rendition practices, is dealt with in the third chapter. Usiskin provides a short history of the island of Diego Garcia and its strategic importance to UK and US forward-operating capacities in the region (the US has established forward-operating bases/sites (FOBs/FOSs) around the world as locations used to support operations with limited permanent personnel). There have been a number of allegations made and questions asked about the US use of Diego Garcia as either a prison, holding site or transit location as part of the rendition programme, the answers to which have been confused, obfuscated and outright contradictory. Repeated requests by international bodies like the International Committee of the Red Cross (ICRC) and various organs of the United Nations have not induced investigative compliance from the UK in relation to Diego Garcia, and this seems unlikely to change (35-50).

Information released in bits and pieces over the years since 9/11 suggests that not only was Diego Garcia used in the rendition network, but that the UK government, despite explicit denials, knew and were therefore complicit (51-61). The author has spent years tracing cases of individuals who experienced rendition, only some of whom have been released. Those that have spoken of their experiences, like Pakistani-Egyptian national Mohammed Saad Iqbal Madni, still suffer mentally and physically from their (years-long) experiences in the traumatic extrajudicial detention system of the WoT (58-61).

Following a brief history of the term ‘rendition’ (63), Usiskin then turns her attention more specifically to the US actions in, and collaboration with, state authorities in East Africa, particularly focusing on Kenya in Chapter Five (63-73). The US was involved in the creation of Kenya’s counterterrorism policies and procedures and the two nations apparently cooperated quite closely in the matter of rendition and detention, as well as with the Somali authorities of the time. Usiskin also details some of her own experience with government abuses of power during her time as a human rights defender, having been detained for short periods and then summarily deported from both Kenya and Uganda for her work on several human rights cases (83-88).

Usiskin also moves into the use of unmanned aircraft (drones) in targeted killings, specifically in East Africa (though this also occurs elsewhere). There is significant exploration of both the US use of Djibouti’s Camp Lemonnier and Chabelley airfield as bases of operation for targeted killings and the evolution of the drone programme through the George W. Bush and Barack Obama presidencies. The subsequent chapter explores the link the author sees between the US ‘exceptionalist approach to international human rights and humanitarian law’ (109-10), and the growing culture of impunity in partners of the global WoT, specifically in Kenya. Over the last decade, Kenya has seen a rise in assassinations, disappearances and failures to investigate both the murders of Muslims in Kenya as well as deaths at police hands. The situation described is fraught and dangerous for Kenyans trying to live ordinary lives (109-21). Usiskin also explores the (occasionally tenuous) relationship between counter-piracy operations and counterterrorism action, particularly regarding Somalia. While these two issues would seem unrelated, there have been cases of suspected terrorists being picked up and transported by vessels of counter-piracy manoeuvres or being held in counter-piracy prisons (137).

Another of the victims of increasingly militarised counterterrorism stances has been civil society, particularly human rights organisations in East Africa. Focusing particularly on Ethiopia and Kenya, the author discusses the effects of largely undemocratic legislations and practices instituted since 9/11 (141-50). Human rights defenders and journalists have suffered in particular as governments crack down on free speech and independent media, legitimised by counterterror language and claims of both UN policy alignment and national security concerns. In addition, hundreds of NGOs have been deregistered or declared instruments for, supporters of or otherwise related to terrorism. Further, the exclusionary and exceptionalist policies of the WoT have reinforced already fraught ethnic divisions in Kenya, where Somali Kenyans have experienced higher degrees of suspicion and unwarranted hostility than ever before: ‘the War on Terror’s motifs of violent exclusion and exceptionalism to international law’ have been integrated into policy and culture in certain parts of East Africa (163).

The uptake of the internet and communications technologies in East Africa has also increased the vectors through which governments can approach alleged terrorist suspects. Surveillance technologies in particular, specifically those allowing unauthorised access to devices, have contributed to a huge number of unlawful detentions (165-66). Hacking tools such as FinFisher and Remote Control System have also been used by East African governments, apparently in the attempt to monitor and silence dissidents, as well as against terror suspects (177-84). Journalists are also under increasing scrutiny in East Africa, particularly those of Somali ethnicity. They face dual dangers posed by their own and neighbouring governments and Al-Shabaab (186-87). Walking the line between the two is a risk that has forced many into exile, refugee status or jail; or they have been ‘disappeared’ or executed.

Usiskin paints a grave picture of the effects of the global WoT in the East African region. Spiralling out from counterterrorism operations and policies, the national and regional security apparatuses that have developed are less and less democratic institutions and more tools of (increasingly) authoritarian regimes determined to silence civil dissidence. Usiskin writes clearly and emotes very effectively; the examples drawn on throughout the text illustrate her points well. This is an informative read for anyone interested in the East African experiences during the almost two-decade-long global ‘War on Terror’.

Posted In: Africa and the Middle East | International Relations | USA and Canada