A puzzle surrounds the Donald Trump presidency: for all of his rhetoric surrounding terrorism and counterterrorism, little appears to have changed when it comes to actual policy. In Bluster: Donald Trump’s War on Terror, Peter Neumann delves into this paradox in his comprehensive account of US foreign policymaking under Trump. Jonny Hall finds this an admirable review of the Trump administration’s counterterrorism strategy over the last two years. 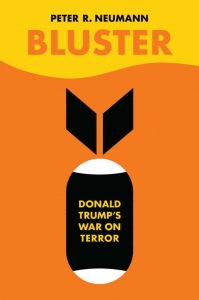 With this primary task, the book does a fine job. Bluster is meticulously researched, concisely organised and easy to read. As Neumann himself notes, currently there has been little ink spilled on the Trump administration’s counterterrorism strategy, or certainly not in a comprehensive manner such as this. Consequently, it is clear that the author (and his mentioned research assistants) have spent an impressive amount of time reading news outlets and primary sources to bring together this information into a coherent whole.

Beyond this task, Neumann makes several key arguments. Firstly, in the realm of ‘actual counterterrorism’, Neumann contends that ‘Trump’s War on Terror is not fundamentally different from those of his predecessors.’ This is detailed in Chapters Four-Six in particular, which focus respectively on the ‘Muslim Ban’; rules of engagement; and the campaign to defeat the Islamic State in Iraq and Syria. In all these cases, a clear contrast is presented between Trump’s personal opinions and the policies that his administration has actually pursued.

To explain these cases, Neumann focuses on the administrative weakness of the Trump administration and the presence of a group of ‘career officials and mainstream Republicans’ whom he terms ‘the generals’ (45). Along with these, Neumann identifies two other groups of national security appointees in the Trump administration: the ‘know-nothings’ and the ‘true believers’ (49). The usefulness of these labels notwithstanding, it is probably clear from the nicknames adopted that ‘the generals’ come out best in Bluster.

This group – which Neumann describes as having ‘a strong—though largely apolitical—commitment to the nation’ (50) – is portrayed as playing a vital role in preserving and maintaining US counterterrorism strategy in spite of Trump. Former Secretary of Defense James Mattis is placed in this category, and Neumann rightly highlights his influence on maintaining a US troop presence in Afghanistan and Syria. However, I do think that this group (which, in truth, is too broad for analytical precision) is absolved of its responsibility and its politics in Bluster: we cannot simply view actors such as Mattis, John Kelly and H. R. McMaster as dignified pushbacks against Trump’s worst instincts. Instead, we surely have to acknowledge their enabling effects as well.

Besides this discussion, I should also make clear that Neumann contends that ‘Trump’s impact has been tangible’, and not in a positive way (156). This impact is categorised by Neumann into three categories: where damage has been ‘the result of ignorance and incompetence’; where policy has been damaged by Trump’s ‘idiosyncrasy and ill-discipline’; and in the ideological realm (156-57). In the first category, Neumann spends much of Chapter Seven – which focuses on the administration’s relationship with ‘friends and foes’ – denouncing the influence of Jared Kushner and the policies that have been adopted towards Saudi Arabia.

In the second category, Neumann pays particular attention to December 2018 when Trump’s non-interference in the counter-ISIS campaign ‘dramatically changed’ (108) with his announcements to withdraw troops from Syria (and later Afghanistan), something that seems very relevant given recent developments in northern Syria. Related to this, some of the strongest sections of the book deal impressively with how Trump’s unique understanding of the world – whether that be his business background or his emphasis on ‘respect’ in foreign policy – has specifically informed his approach to counterterrorism.

With regards to the third category, the ideological realm, Neumann makes some of his boldest arguments in Bluster. Neumann contends that ‘Trump’s counterterrorism doctrine—which can be summarised as “killing terrorists” and “keeping Muslims out of the country”—has been deeply at odds with established views on “American values” and America’s role in the world’ (7). Thus, although Trump has tried to justify actions such as the ‘Muslim Ban’ as counterterrorism, ‘they are best understood as part of an ideologically-driven effort to “break” the mainstream consensus on immigration, and in so doing re-define the idea of America’ (58).

Via these arguments, I think that Neumann inadvertently whitewashes the George W. Bush administration. For example, although Neumann does rightly compare Trump’s comments on Islam (‘Islam hates us’) with Bush’s rhetoric (describing Islam as a ‘religion of peace’ in the aftermath of 9/11), he ignores the other damaging actions of the Bush administration towards Muslims at home and abroad. Relatedly, the Bush administration’s effective silencing of any debate around counterterrorism policy – such as the build-up to the Iraq War (which is scarcely mentioned in the book) – was surely about redefining ‘the idea of America’ and what Americanness meant, and hardly something unique to Trump.

More generally, in making these arguments about continuity and change, there is a noticeable lack of appropriate theoretical insights in the book. For example, regarding the primary cause of continuity – which Neumann essentially sees as a combination of Trump’s underwhelming governing ability and the presence of strong characters relatively unaligned with Trump’s views – there is an abundance of relevant works from the field of Foreign Policy Analysis. Similarly, the arguments quoted in the above paragraph would be supported by critical works which have looked at the relationship between US foreign policy and national identity, such as David Campbell’s Writing Security. Indeed, authors such as Richard Jackson have applied Campbell’s insights in his Writing the War on Terrorism, as the similarity in title alludes to. By making these points, I am not suggesting that Neumann’s book should instead be a densely theoretical text, for I am fairly sure that would not suit its purpose and target audience. Rather, it is simply that the bolder arguments made in this book – especially those concerning Trump and concepts such as the idea of America – deserve to at least be couched in the appropriate theoretical foregrounding.

In sum, Bluster is an admirable review of the Trump administration’s counterterrorism strategy, which is a noticeably understudied topic at present. It covers a fairly diverse set of subjects and issue areas, from immigration to rules of engagement and drone strikes. Furthermore, the book deals commendably with the complexities of the foreign policymaking process in the Trump administration, with Neumann rightly arguing that we cannot simply ignore Trump’s behaviour, as one New York Times editorial board piece suggested in the context of the National Security Strategy. The grandest arguments in it might have been improved by this book taking on a different character, but Bluster is probably best suited to its current form: a comprehensive review of US counterterrorism strategy over the last two years, which any student of this area should read.