In British Women Amateur Filmmakers, Annamaria Motrescu-Mayes and Heather Norris Nicholson look at the practices of over 40 women amateur filmmakers, including aristocrats, teachers, mountaineers and animators, arguing that the ability to film as amateurs afforded women creative freedoms that would otherwise have been difficult to access through film studios and production companies. In researching and narrating these disregarded histories, the book shows how archival research can lead to the widening of the canon and a broader understanding of the practices and aesthetics of women filmmakers, writes Charlotte Hallahan. 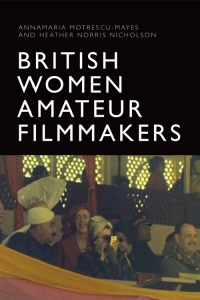 Over the last decade, scholars have stressed the importance of studying and celebrating women filmmakers. The BFI-funded Calling the Shots project recently found that women are severely underrepresented in directorial roles in the film industry, with the majority of women occupying jobs in editing, costume and production. Contemporary scholarship has sought to rectify the lack of critical attention to women’s cinema: Stella Hockenhull’s British Women Filmmakers in the Millennium (2016), Kate Ince’s The Body and the Screen (2017) and Sue Thornham’s Spaces of Women’s Cinema (2019), to name a few, attempt to bring female directors to the forefront of academic debate. British Women Amateur Filmmakers aims to contribute further to this scholarly field, and is the first book-length study to look specifically at the practices of British female amateur filmmakers. Annamaria Motrescu-Mayes and Heather Norris Nicholson include over 40 amateur filmmakers: a diverse and comprehensive sample that encompasses aristocrats, teachers, mountaineers and animators.

Motrescu-Mayes and Norris Nicholson argue that the ability to film as amateurs provided women with creative freedoms that were impossible to access through film studios and production companies. But these freedoms were only available to the wealthy and privileged: those able to own expensive equipment. The book endeavours to draw out these contradictions without discrediting the work of those fortunate enough to become amateur filmmakers. It treads a careful line between understanding the aesthetic innovations of these women, and acknowledging the power structures and social tensions inherent in what they were creating. While they recognise the imperial hierarchies at work in films by colonial white women, for example, the authors acknowledge their historical importance as ‘nuanced narratives about imperial race and gender politics’ (70).

Motrescu-Mayes and Norris Nicholson advocate for a critical perspective that focuses on ‘factual details’ (such as historical and archival material) and that does not commit to one theoretical framework. Such an analytical approach, they argue, ‘could help to translate social expectations of gendered narratives and identity representation, and consequently dismantle stereotypical representations of gender and gender-affiliated media (self-)representations’ (177-78). Consequently, the authors endeavour to draw out the subtle differences in how various filmmakers constructed their feminine identities with their cameras. The authors argue that the agency of these filmmakers is not necessarily represented in the feminist content of their films, but in the potentially subversive ‘selfhood’ that access to film equipment provided. Motrescu-Mayes and Norris Nicholson notice that many of these amateur films do not make bold feminist statements, but instead point to their more subtle acts as ‘mediators of gender emancipation’, such as the carving out of their own spaces and communities (229). The shift of attention away from theoretical claims and towards historiographical analysis allows Motrescu-Mayes and Norris Nicholson to explore the specific and nuanced practices of individual filmmakers, and dispels the threat of sweeping generalisations.

So British Women Amateur Filmmakers has two functions: first, it is a methodical and comprehensive history of the practices of women amateur filmmakers in Britain; and, second, it theorises the subjectivities that such filmmaking produced. The former function is concerned with specific contextual details. Motrescu-Mayes and Norris Nicholson here emphasise the importance of examining how women interacted with new cine technologies, how they formed communities with others in the film industry and how film allowed them to engage in new and interesting ways with well-known historical events. Chapter Two, ‘Webs of Production and Practice’, looks at how changing visual technologies in the early twentieth century, and specifically the introduction of portable, lightweight film cameras by Kodak and Pathé, led to women becoming increasingly involved in filmmaking communities and clubs like the Institute of Amateur Cinematographers (IAC). Chapter Seven turns its attention to these filmmakers’ narratives of prominent cultural moments, such as Eileen Healey’s film about the all-women mountaineering expedition up the Cho Oyu summit in 1935. The authors argue Healey’s unique perspective (which is absolutely tied to her status as amateur rather than professional filmmaker) allows her to faithfully capture the tragic nature of the event. This argument continues in an analysis of Rosie Newman’s films on her travels to India in 1935, where the authors contend that her attention to revolutionary political activities demonstrates her awareness of the historical importance of her amateur work.

The second function of the text is inspired by traditions in visual and social anthropology, so that Motrescu-Mayes and Norris Nicholson turn their attention to the ways in which women used amateur film to construct a ‘selfhood’. Chapter Three, for example, examines the gazes of colonial women filmmakers in an attempt to understand their contradictory status as both ‘vectors of colonising credos’ and ‘commodified subalterns of imperial paternalism’ (21). Chapter Five follows on from these claims, and argues that the private non-commissioned films of amateur filmmakers in the late colonial period often contained new ‘understandings of political, racial, and gender transformations’, and even, in some cases, challenged pre-existing gender and colonial hierarchies (23).

We might ask whether the study loses something by its somewhat dismissive approach to theory. Might the theories these authors avoid not have something useful to add about what an ‘authentic’ femininity might look like? Is such a femininity inclusive of the working class, ethnic minorities and women who are queer or non-conforming? Unpacking phrases like ‘gender-specific’ and ‘return-of-the-gaze’ might allow us to further understand the specific political and historical constructions of feminine subjectivity, and perhaps elaborate on the subtle ways that these women challenged patriarchal formations of femininity (58; 127).

The book ends with its hope that it will open the door to further theoretical analyses of women amateur filmmakers, with the authors wishing to expand ‘this new field of visual and identity “staging of the self”, and the ways in which women have used amateur filmmaking to create and communicate novel views on constructions of female selfhood’ (230). The strength of the project is the valuable groundwork it lays for this new field of scholarship, so that we can continue to tackle questions about amateur filmmaking and women’s agency. In researching and narrating these disregarded histories, Motrescu-Mayes and Norris Nicholson demonstrate how new forms of archival research can lead to the widening of the canon and a broader understanding of the practices and aesthetics of female filmmakers.

Charlotte Hallahan is a PhD candidate at the University of East Anglia. Her thesis examines British psychoanalytic and cultural institutions during the Second World War, and their relationship to changing ideologies of citizenship.