Ahead of the publication of a new centenary edition of John Maynard Keynes’s The Economic Consequences of the Peace, the editor Professor Michael Cox discusses the making and impact of this influential book, drawing on his Introduction to the new Palgrave edition as well as a talk given at The Economic Consequences of the Peace conference (Kings College, Cambridge, September 2019).

The new edition of this book was launched at LSE on 28 November 2019 as part of the event ‘From 1919 to 2019: Pivotal Lessons from Versailles’. You can listen to the event podcast here and you can watch a BBC Parliament recording of the event here. 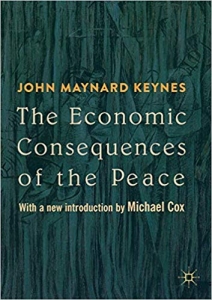 Few short books have had such a big impact as John Maynard Keynes’s The Economic Consequences of the Peace. Written in just under six months, and going on to become a publishing sensation, it is a volume that has been disputed and refuted, praised and celebrated in equal measure ever since it was first published in December 1919. It may not have changed the course of history. But as the historian Adam Tooze has reminded us, no single book did more to contribute to the ‘mood of disillusionment’ following Versailles than The Economic Consequences of the Peace. It certainly upset a lot of people, and may, in its own way, have contributed to a further souring of relations with France after the war, caused major embarrassment across the Atlantic and was even deployed by the Bolsheviks in their propaganda war against the West.  A few have even tried to claim (wrongly) that Keynes’s attack on the peace helped Adolf Hitler come to power fourteen years later. However, there is little doubt that Keynes’s earlier plea on behalf of Germany did help create a climate of opinion in which Germany’s demands for a revision of borders after 1933 met with a sympathetic response in some western circles. As one of his many admirers later conceded, Keynes was no apologist for Hitler. On the other hand, he did believe that the injustices inflicted on Germany in 1919 needed to be addressed, and that conceding something to Germany in 1938 was the only way of avoiding another catastrophic war (Kingsley Martin, 1968, 241-42).

As has often been remarked, The Economic Consequences of the Peace is almost certainly Keynes’s most accessible book which has been read for pleasure by non-economists as much as by economists themselves. The same cannot be said of all his books. His earlier work on Indian Currency and Finance really only appeals to the specialist. His more theoretical studies on probability theory and money have only been of interest to economists. Even his ground-breaking study, The General Theory of Employment, Interest and Money, can hardly be characterised as an easy read! In many ways The Economic Consequences of the Peace is a stand-out volume in Keynes’s wider oeuvre.

But what does Keynes actually say in the book that made it so influential and so controversial? If anything it was less the sections dealing with economics – important though those long passages are – and more those dealing with politics and personalities. It was this more than anything else that caused it to be such an enormous success. Keynes advances a simple thesis. This, summarised in a few words, argued that the First World War had led to the collapse of an already fragile  European order; that it was then up to the peace-makers in Paris to put that order back together again; but in Paris they singularly failed to do so because they were blinded by self-interest and narrow national considerations. Indeed, according to Keynes, they made matters worse by then trying to punish rather than rehabilitate Germany; and without a German recovery, he went on, Europe could only flounder. Keynes was especially tough on the ‘big three’, particularly US President Woodrow Wilson, often portrayed in the American literature as the hero of the period. But he had equally harsh things to say about the British Prime Minister David Lloyd George – he had no principles – and the French leader Georges Clemenceau – he had only one thing in mind: keep Germany weak.

Written in crisp punchy English, this highly critical insider’s account of what went on behind closed doors could not but cause a stir. It also caused something of a backlash by those who felt Keynes had either been too soft on Germany (who had, after all, started the war) and far too tough on the French (who had, after all, suffered the most amongst the western allies). For this reason, no doubt, it also became one of his most criticised books – and nobody took Keynes to task more savagely than the French writer Étienne Mantoux, a one-time student of LSE who studied under Friedrich Hayek here in the 1930s. Mantoux was in little doubt: Keynes, he argued in 1946, had written a dangerously inaccurate account of what had gone on in Paris in 1919. But even Mantoux had to accept that The Economic Consequences of the Peace was a truly remarkable work, even comparing it at one point to Edmund Burke’s much earlier attack on the French revolution. Others have been a little less generous, including a whole phalanx of modern historians. They all agree that Keynes wrote a persuasive book – if anything, too persuasive. Still, Keynes, in their view, just got a lot wrong. He was far too unsympathetic to the French, much too soft on Germany and plainly unfair on the main statesmen trying to do their best in Paris. He even got some of his economic facts wrong as well.

Yet, in spite of this broadside, his latter-day opponents have never quite managed to deliver the coup de grace. As one of the great doyens of international history has confessed, the book has been regularly attacked from several different angles; but sadly, it continues to seduce people into thinking that Versailles was a total failure. Margaret Macmillan expressed this sense of frustration vividly in a piece she wrote for the New Statesman in 2018. Keynes, she argues, ‘dashed off’ an insubstantial volume ‘with a very dry title’ without much evidence to back up his claims. Yet this ‘little book (as she refers to it), authored by a ‘self-assured young economist’, continues to mesmerise the unsuspecting. It is all very frustrating.

A great deal has already been written about The Economic Consequences of the Peace. Symposia have been organised to discuss its merits. Careers have been made attacking it. And historians of economic history continue to debate its argument concerning reparations. Some believe that it was perhaps his best book; others his worst. One or two even claim that Keynes himself later wished he had never written the volume in the first place (see an unverified story in Elizabeth Wiskeman’s The Europe I Saw, 3). And so the debate goes on. But there is a consensus on at least one thing: that the book effectively launched Keynes’s long career as a major public figure. Before the publication of the volume, Keynes was very much the insider’s insider, admired for his brilliance in Cambridge and highly regarded by the English political class, but virtually unknown outside the very narrow circles in which he moved. The Economic Consequences of the Peace changed all that almost overnight.

Not only did the book make him a substantial amount of money, much of which he then went on to lose in currency speculation; after its publication, he could, in the words of one of his biographers, lay ‘claim’ to a great deal of ‘attention’. There are very few people who become household names by virtue of writing one short book. But, as another writer on Keynes has noted, The Economic Consequences of the Peace did precisely that by bringing the young economist (he was only in his mid-thirties at the time) ‘fame, brief affluence, much correspondence, public involvement and new opportunity’ in equal measure. Keynes had arrived.

Professor Michael Cox is Emeritus Professor of International Relations and Founding Director of LSE IDEAS. His next book, Comrades: Putin, Xi Jinping and the Challenge to the West, explores the China-Russia relationship and is being published by Polity.