In Ghetto: The History of a Word, Daniel B. Schwartz traces the genealogy of the term ‘ghetto’, showing its changing meaning since its origin in the enforced enclosure of the Jewish residents of Venice in 1516 on the island called the Ghetto Nuovo. The book is a welcome addition to historians and urbanists alike in providing new insights into conceptions of the word and, in so doing, emphasising the power of language when describing complex phenomena such as segregation, writes Laura Vaughan.

Ghetto: The History of a Word. Daniel B. Schwartz. Harvard University Press. 2019. 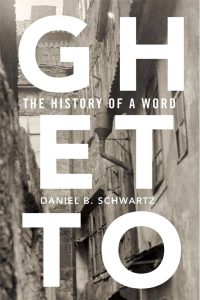 In the past few years we have seen a flurry of books that have deepened the understanding of the history of the ghetto by going back to the historical roots of the concept: the Jewish quarter of Venice, established just over five centuries ago. Daniel B. Schwartz’s new book traces the genealogy of the word ghetto, rather than simply ‘a general essence or codification of the term’ (5). As such, it will be a welcome addition to historians and urbanists alike by providing new insights into conceptions of the term and in so doing, emphasising the power of language when describing complex phenomena such as segregation.

As the author acknowledges, his review constitutes a timely updating of Benjamin Ravid’s classic paper on the ‘odyssey’ of the word (1992) as well as a companion to Mitchell Duneier’s 2016 book on the subject. Schwartz argues that the concept was a way in which emancipated Jewry could define their distinction, or distance, from the past, becoming a ‘constitutive element of Jewish identity’ (6). It developed into, he suggests, ‘a metaphor for a premodern Jewish past destined for obliteration, but one that survived as a spectral presence’ (52). Yet the other central element of the book is the way in which the term ghetto has continued to change its meaning: in modern times to be commonly used to describe slum areas, especially those with a large minority population; as a term for segregated African-American neighbourhoods; and more recently gaining ground in reference to the spatial/social segregation of refugees in European countries.

Schwartz points out in the book’s introduction that despite the unarguable fact that the term ghetto originates in the enforced enclosure of the Jews of Venice in 1516 on the island called the Ghetto Nuovo, the origins of the idea itself are much murkier. Not only was it common across their millennia-long diaspora for Jews to congregate for religious, cultural, but also protective reasons, but economic activity was another important element; being frequently forbidden to own land or to join a profession, many Jews ended up in mercantile activities and so would be found to prefer a location near the main market square.

Indeed, spatially speaking, it is difficult to pinpoint the precise boundaries of Jewish quarters of ancient, premodern (and also, I would argue, modern) times (see Mapping Society, Chapter Five). Jewish quarters may well contain higher density settlement of co-religionists as well as the majority population of the Jews of a particular city, but most cities containing Jewish quarters would also contain Jewish people living outside of it, ‏especially the more prosperous members of the community. Here Schwartz reiterates Ravid’s distinction between voluntary Jewish quarters and the legally mandatory, exclusively Jewish gated neighbourhoods – the latter constituting the sine qua non of the ghetto, especially in medieval Christendom.

The book’s first chapter continues the narrative history of Jewish ghettos: showing, for example, how the ghetto became synonymous with ‘a site of material filth and disorder’ by the sixteenth century (38). Fascinatingly Schwartz shows how by the late eighteenth century the term had come to also signify the sound of song emanating from synagogues. The chapter closes with the seventeenth-century idea that the term was etymologically derived from the Hebrew word for divorce (ghet); his account of the rise and then decline of this theory allows Schwartz to reiterate the shifting, myriad meanings of ghetto. He proposes that ‘likening [it] to a divorce suggested that it was the product of a rupture that took place at a particular moment’ (43), defining relations to Christian society not as a permanent condition, but changing at key moments in time. Moreover, as the author’s analysis shows, the separation could be seen as an opportunity for religious practice to be heightened in its adherence to piety.

The taken-for-granted aspect of Jewish enclosure in Christian-European cities shifted dramatically with their liberation from the ghetto under Napoleonic rule. Schwartz shows how the transformation of the term’s meaning was concurrent with the period of Jewish civil liberation, demonstrating how ghetto became a metonym for the Jewish people themselves, rather than their place of enclosure. Yet the term’s meaning still retained the conception of residential segregation (65), with added meanings related to outsider status, especially in Eastern Europe, that continued to be associated with the social exclusion of Europe’s Jews even when outside the ghetto (notably the latter region’s pattern of Jewish life in predominantly Jewish shtetls only reinforced this meaning). The author shows how even when Jewish clustering was formally a voluntary process, mass migration, especially at the turn of the twentieth century, led to Jewish quarters once again being sites of deep poverty.

Schwartz has mined historical texts very effectively, showing in subsequent chapters the transmutation of the term (and its subjects) upon its arrival in America. The author highlights how the phenomenon of migrants creating their own minority quarters only intensified in the new world. The negative connotations of settlement in high density were reinforced by the reiteration of the term ghetto and Schwartz explains how literature became the vehicle that transmitted the term from Europe to the United States, initially via Israel Zangwill’s Ghetto book series (first published in 1892), which portrayed the ghetto as both a site of ugliness, but also one of humanity, laughter and conservation of a way of life. Schwartz also indicates how the classic novel by Abraham Cahan, Yekl, introduced a new meaning, diversity, with the ghetto itself functioning as ‘an assimilative “melting pot”’ (104) and, importantly, a transit station towards integration.

Schwartz also argues that the United States was where the next critical shift in meaning took place, via Louis Wirth’s classic The Ghetto, written at the start of his career within the Chicago School (1928), which transformed the ghetto from being ‘a Jewish site to a sociological concept’ (115), part of a natural process (see Ernest W. Burgess’s classic concentric zones theory, 1925) and thus not exclusive to Jewish people. Yet though the ghetto started to become a purely toponymic description of a Jewish quarter, its negative connotations continued to prevail well into the 1930s.

Schwartz highlights the next transformation of the ghetto, in its revival by the Nazis as a ‘grotesque caricature’ (124) of medieval Jewish quarters, in the form of legislative exclusion of Germany’s Jews, then the physical segregation of large numbers of Europe’s Jewish people (over one thousand ‘ghettos’), culminating in the death camps. The chapter dedicated to this tragic history provides an important exposition on how physical imprisonment corresponded to the mental disorientation of the Jewish individual’s position in society, and vice versa.

Schwartz’s last chapter, on the ghetto in post-war America, describes the transformation of the term to being inexorably tied to impoverished enclaves, used to describe the hemming-in of African Americans – quite clearly in analogy to Jewish quarters. Despite the easy transfer of meaning from Jewish ghetto to black ghetto, the term took root more deeply once it was adopted for the struggle by African Americans against segregation. By the 1950s the roots had taken hold more strongly still, since the ghetto became increasingly irrelevant to the many Jewish people who were moving to the suburbs; in parallel, African Americans found their neighbourhoods had become, Schwartz argues, both spatially and temporally fixed. The pathological transformation of ghetto into enforced enclosure could be seen, one concludes, to have come full circle.