LSE Library’s spring exhibition Social Revolution: Women’s Liberation and Gay Liberation in the 1970s and 80s (Mon 20 Jan – Fri 3 April 2020) marks 50 years since the beginnings of two significant social movements in the UK: the first women’s liberation conference in Oxford and the first meeting of the Gay Liberation Front (GLF) at LSE. Using material from The Women’s Library collection and the Hall-Carpenter Archives, this exhibition concentrates on the cultural impact of women’s liberation and of gay liberation to show how activists transformed publishing, performance and visual imagery around gender and sexuality. 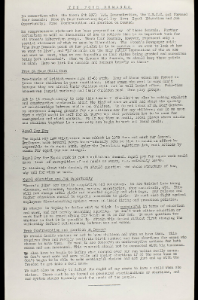 The first women’s liberation conference was held at Oxford in February 1970 and it was the first time that so many women, over 400, came together to discuss women’s experiences. An unassuming piece of paper lists four demands which gave structure to what the women were talking about: equal pay; equal education and job opportunity; 24-hour childcare; and free contraception and abortion on demand. Apart from a demonstration in March 1971, these demands were taken up by individual groups.

Three further demands were added by 1978: legal and financial independence for all women; the right to a self-defined sexuality; and freedom from intimidation and violence. These demands are a reminder that campaigning is a long process – abortion in Northern Ireland was only decriminalised in 2019 and Samira Ahmed’s equal pay case against the BBC last year shows that laws are worthless unless enforced. 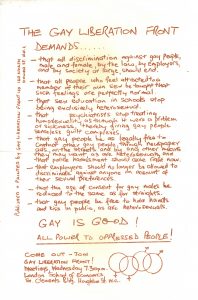 The first meeting of the GLF took place at LSE in October 1970.  GLF did not seek equality within the status quo. They believed society was fundamentally unjust and sought to change it to end the oppression experienced by LGBT people. A list of demands was quickly drawn up. GLF demanded the same freedoms as heterosexuals, such as freedom to hold hands in public. They also demanded that sex education in schools should not be exclusively heterosexual, which is still relevant today. 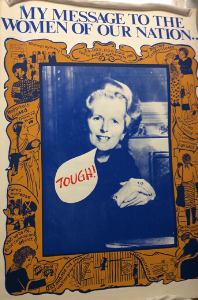 This poster was designed and produced by See Red Women’s Workshop, a poster collective formed in 1974. They were very good at communicating facts in simple and immediate ways.

Although Margaret Thatcher became the first female Prime Minister in 1979, she was deeply unpopular with certain sections of society. In this poster, See Red drew a frame around Thatcher’s portrait with illustrations of how her policies discriminated against women. 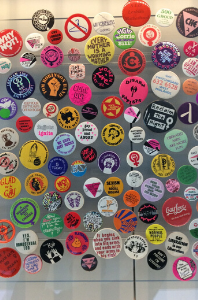 The badges represent the many campaigns that were initiated by women’s liberation and by gay liberation groups during this period, but which couldn’t be featured in the exhibition. Some badges were made at home and others could be bought at radical bookshops. 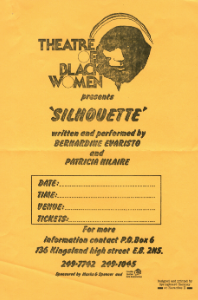 ‘Silhouette’ is a play written and performed by Bernardine Evaristo (Booker Prize Winner 2019 for Girl, Woman, Other) and Patricia Hilaire in the early 1980s as a Theatre of Black Women production. It addresses mixed-race identity.

Evaristo, Hilaire and Paulette Randall founded Theatre of Black Women in 1982. It was the first black women’s theatre company in the UK giving a voice to black and Asian women’s stories and creating theatre on their own terms. The company also ran workshops on drama and theatre writing for young women, often collaborating with Women in Entertainment.

Interestingly, the play was sponsored by Marks & Spencer (now M&S).

If you want to visit the exhibition and pick out your own favourite objects, then you are more than welcome to do so.  Social Revolution: Women’s Liberation and Gay Liberation in the 1970s and 80s is running in LSE Library’s gallery and open daily to all until 3 April 2020.

For further information about our LGBT collection, see http://www.lse.ac.uk/library/collection-highlights/lgbt-collections.

Note: Images are provided courtesy of LSE Library/London School of Economics and should not be reproduced without the permission of the copyright holder.

Dr Gillian Murphy is the Curator for Equality, Rights and Citizenship at LSE Library.

Posted In: Contributions from LSE Staff and Students | Gender and Sexuality | History