In Climate Change Impacts on Gender Relations in Bangladesh: Socio-environmental Struggle of the Shora Forest Community in the Sundarbans Mangrove Forest, Sajal Roy offers a close examination of the Shora community, examining the different gendered experiences of its members and their interactions with the Sundarbans forest in the context of climate change and two recent cyclones. While the book relies heavily on secondary sources and description over critical interrogation, it sets a foundation for further analysis of the relationship between gender, climate change and environmental security, writes Daniela Schofield. 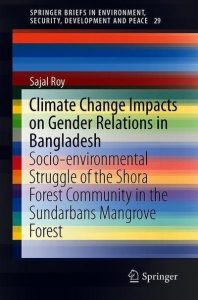 From shifting rainfall patterns pushing parts of southern Africa closer to famine to drought exacerbating wildfires across Australia, the effects of climate change are becoming devastating realities for individuals and communities worldwide. Across the globe, human activities, knowledge and beliefs are interwoven with the natural environments upon which communities depend for economic, physical and cultural survival: natural environments that are increasingly under threat from climate change and extreme weather events. In Climate Change Impacts on Gender Relations in Bangladesh: Socio-environmental Struggle of the Shora Forest Community in the Sundarbans Mangrove Forest, Sajal Roy holds a magnifying glass to the Shora community, examining the gendered differences of its members and their interaction with the Sundarbans forest in the context of climate change and following cyclones Sidr (2007) and Aila (2009).

In this compact volume (part of SpringerBrief’s Environment, Security, Development and Peace series), Roy sets out to document the activities and perceptions of Shora women and men as they relate to the Sundarbans. With an area of approximately 10,000 km2, the Sundarbans forest is the planet’s largest tidal mangrove zone stretching across India and Bangladesh. Roy’s examination of the overlapping areas of gender, ecological knowledge and environmental security highlights the importance of recognising how these areas intersect with one another and the localised consequences of climate-related extreme weather events. As Roy points out early in the text, the Sundarbans have been an increasing focus of development agencies in recent years through research and programming that fails ‘to present a comprehensive juncture between the disaster victims’ knowledge of the forest and human Sundarbans relations’ (9).

The brief opens by identifying a gap in knowledge of the impact of extreme weather events on gender relations. In seeking to address this gap, Roy clearly articulates an objective of documenting gendered activities and perceptions of women and men in Shora related to forest use. The strength of the volume is in its surfacing and disseminating accounts of everyday experiences, which may be useful for policymakers, development practitioners and scholars. Yet, the brief’s title overpromises an analytical investigation of the relationship between climate change and gender relations, which, disappointingly, is not present. While interesting to read, in the absence of a substantial analysis, the accounts presented fall short of filling the identified knowledge gap. Although Roy acknowledges the limitations of the study (Chapter Six), the brief is conceptually confusing throughout due to a distractingly heavy reliance on secondary sources in every chapter interspersed alongside empirical observations.

The brief centres on a study conducted by Roy for a 2012 MPhil thesis. Following an introduction to the Sundarbans, Shora and cyclones Sidr and Aila (Chapter One), the brief follows a thesis-like structure, describing qualitative research methods employed and overviewing Roy’s theoretical approaches – standpoint theory and feminist political ecology (Chapter Two). The volume then moves to three body chapters that describe the relation of Shora community members to the forest (Chapter Three), how Shora women utilise the resources of the Sundarbans (Chapter Four) and environmental and economic security, as well as women’s roles in forest conservation (Chapter Five). The volume concludes with a superficial analysis of gendered knowledge in Shora, which is largely descriptive rather than a critical interrogation.

Roy’s empirical accounts, often heavy in aesthetic detail, surface articulations of traditional knowledge from Shora community members. Accounts are provided from not only men and women, but different groups of women. Roy recounts the forest-going practices of three groups of women in Chapter Three: Jele-Baoalie women engaged in fishing work; divorced women; and married women. Although each group is only briefly overviewed, Roy’s differentiation between the three is useful in resisting a homogenised depiction of women. Despite this, I have three concerns when reading the discussion of women.

My first concern is with the depiction of divorced women as an exclusively vulnerable group. Roy describes exclusion faced by divorced women when former spouses withdraw financial support and the stigma they encounter from their families. Yet, Roy also describes a communal housing arrangement for divorced Shora women that provides living space and opportunity for economic collaboration. Although this arrangement is described as precarious due its challenging of patriarchal norms, Roy reports divorced women living in this arrangement as accessing the forest to generate their own income in a way married women do not (48). This description raises the question of whether the status of being divorced, while not without difficulty, offers an opportunity for women to engage in forest-related income-generating activities with more, or at least different, agency than that of married women. It would have been interesting for a comparison between the activities of divorced and married women to be explored in greater depth.

My second concern lays in Roy’s claim that gender norms in Shora are being overcome. The brief contains significant exposition on gender divisions and norms in Shora generally. His claim is neither substantiated by the accounts provided, nor is a plausible argument for this claim presented. This argument is also not linked to cyclones Sidr or Aila, missing the stated aim of advancing knowledge of the impact of extreme weather events on gender relations. Further, accounts that directly contradict this claim are provided in the description of entrenched norms that devalue and disrespect women’s labour (65) and the statement that ‘women’s socio-economic identity at Shora is controlled by patriarchal ideology’ (69).

My third concern is the assumption of women as natural caretakers of the forest. A subsection titled ‘Women as Natural Conservators of the Sundarbans’ (67) unquestioningly depicts Shora women as forest guardians. Roy points to a 2004 USAID programme that utilised Shora women as champions of conservation to dissuade their husbands from killing Bengal tigers (68) as evidence that women are ‘more motivated and environmentally aware of the importance of wildlife conservation’ than men (69). Failing to critically examine the assumption that women are inherently motivated to protect the forest risks perpetuating a feminisation of responsibility for conservation and for development programming to add to women’s existing multiple responsibilities.

I am not convinced the brief succeeds in addressing the gap in knowledge of the impact of extreme weather events on gender relations. A dissonance is present throughout the text between this aim and Roy’s objective to provide documentary accounts from members of the Shora community. The result is a heavily descriptive, at times subjectively presented, narrative reliant on secondary sources. Yet, Roy sets the foundation for an interesting analysis of gender, climate change and environmental security, which could be undertaken in future to contribute to filling the gap. In doing so, it would be interesting to consider work carried out since Roy’s 2012 fieldwork (e.g. the potential for more gender equitable societies following extreme weather events, the effect of extreme weather on gender gaps in education and the prevalence of gender-based violence after extreme weather events) and what remains to be addressed in the knowledge gap of the impact of climate change and extreme weather events on gender relations.

Daniela Schofield is a Consultant in the International Development Unit at Ecorys. Her research interests include gender, informality, urbanisation, livelihoods, labour, and climate change. She has worked on donor-funded programmes and evaluations in the Democratic Republic of Congo, Malawi, Myanmar, Nepal, Tanzania, and Zimbabwe. You can follow her on Twitter @DaniSchofield.