In Dramas at Westminster: Select Committees and the Quest for Accountability, Marc Geddes aims to open up everyday life along the committee corridors of the Palace of Westminster to examine how the UK Parliament performs the role of scrutiny. The book tells us a great deal about the public and hidden power of select committees at a time when scrutiny is more vital than it has ever been, writes Ben Worthy. 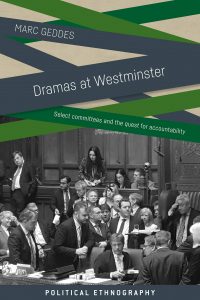 Parliament is a complex place. It does and is very different things at the same time. It is a functioning legislature, a museum and heritage site and a symbolic site of power. All these things mesh together and make for a unique and quite confusing institution. It’s no wonder that the public, and even political scientists, can’t agree on whether to ignore, ridicule or celebrate Westminster.

What Marc Geddes’s new book, Dramas at Westminster, aims to do is to cut through this confusion and ‘open up everyday life along the committee corridors of the Palace of Westminster’, focusing on how Parliament does scrutiny. Scrutiny and accountability have always been an important part of what Parliament does, ever since it used to try to impeach Prime Ministers. At the centre of scrutiny is the select committee system. Geddes’s book highlights the paradox at the heart of this vital activity. Since 2010, this function has been enhanced by the Wright reforms, and has taken on a vital role as Brexit has ping-ponged and bounced around within and outside of Parliament. Yet MPs and Parliament as a whole have never been under such pressure or so widely maligned.

One point I often try and get across in my own work and teaching is that Parliament is both a theatre and a working body: Parliament is a place that scrutinises laws through procedure but also is a theatre where politicians act and perform for each other and an often sceptical public. My favourite piece of theatre I often turn to in order to demonstrate this point is Tony Blair’s ‘weak, weak, weak’ to John Major (watch it here at 4 minutes in). I argue to my students there’s a sharp distinction between what happens in the full theatrical glare of the partisan Prime Minister’s Questions (PMQs) and the cold forensic danger of a powerfully prepared select committee, working cross-party by consensus.

Geddes’s book takes off from exactly this point, and in doing so, it proves that my neat split between ‘theatre’ and ‘working body’ is simple, elegant – and wrong. Geddes argues that the neat distinction between theatre and working body breaks down even with scrutiny. This plays to the theories of the great sociologist Erving Goffman between ‘front stage’ and ‘back stage’ work, showing that scrutiny can be as performed and performative as PMQs. This is in part about a gap between the theory and practice of scrutiny. In theory, MPs come fully briefed to question, scrutinise and open up government at every hearing. In reality they don’t. Party loyalties, time pressures and a whole raft of other obstacles make for a rather more limited and short-term approach in practice than in theory.

In fact, taking this further, Geddes argues that scrutiny is interpreted very differently by different members and how they ‘do’ it, or more accurately perform it, can vary immensely. His typology of roles gives a flavour of how different these can be: specialists, lone wolves, constituency champions, party helpers, learners and (my personal favourite) absentees. On top of these is the rather fluid role of the chairs, between those who want to create agreement and help policy to those who want to influence wider public debate. Parliament leadership is an underexplored area, and we can witness the creation and reinvention of politicians in chairperson roles, perhaps none more so than Jeremy Hunt as Health Secretary turned gadfly as the Chair of the Health and Social Care Select Committee since January 2020.

This paints a different, and far more nuanced, view of how scrutiny happens and what it means. Watching a committee in action, we see the lead actor chairs, the supporting cast of MPs and, stage left, the often hidden but vital contributions of officials who try and match the politics and performance of MPs with the rules of procedure.

What this makes for is that scrutiny is more vital and influential than it appears, but it is also far more complex. Select committees do much more than just write reports: they can influence, gather information and determine who or what sets the agenda and who engages with Parliament. How this could work on video link and conference software offers another interesting layer.

Reading Geddes’s book, Brexit comes to mind as a perfect example of select committee influence and boundaries. Brexit has shown how influential committees can be, perhaps symbolised by the famous release, after a long battle, of the impact of Brexit studies by the Committee on Exiting the European Union. This was a stark demonstration of what the book shows to be the raw power of a committee, their ability to influence debate and, behind the scenes, the virtues of astute chairpersonship. Perhaps underscoring Geddes’s point on the time pressure on MPs and Westminster, a later Freedom of Information (FOI) request showed that out of 1,450 parliamentarians, just 83 visited the famous reading room where these studies were located.

Yet Brexit has also tested the limits, in a series of public and performative ways. It has led to one of the few times when the cross-party consensus has broken down in public when, in a highly performative display, a group of pro-Brexit MPs walked out of the above committee and pushed a minority report. Dominic Cummings, meanwhile, now Chief Advisor to the Prime Minister, was found in contempt for not appearing before the Digital, Culture, Media and Sport (DCMS) committee. In a most symbolic snub, with all sorts of resonance for the many watching in the wings, the Prime Minister Boris Johnson very publicly ducked an appearance before the Liaison committee in 2019.

As Geddes acknowledges, a number of scholars such as Cristina Bandiera, Louise Thompson and Emma Crewe have begun to open up and challenge long held ideas in legislative studies, whether by looking at the cultural and spatial power of the institution, the role of smaller parties or studying both houses of the UK Parliament through an anthropological lens. More generally, Geddes’s research stands in a line of powerful and important works that have begun to change our understanding of how Westminster works, what MPs do, how they behave and, most importantly, the kind of ‘roles’ they perform.

Dramas at Westminster tells us a great deal about the public and hidden power of select committees at a time when scrutiny is more vital than it has ever been. Committees can influence policy and the public, but they also act as information-gatherers and symbolic sites for equality and public participation. Their effect, as Geddes concludes, is less like a laser and more like a web, as the different parts those involved play extend and wrap around an issue. As Parliament moves to focus on both Brexit and Covid-19, the part scrutiny plays, and the drama it brings, will influence British politics.

Dr Ben Worthy is a Senior lecturer in Politics at Birkbeck College, University of London. His specialisms include political leadership, government transparency and British politics. His most recent book is The Politics of Freedom of Information: How and why governments pass laws that threaten their power. He is Deputy Director of the Centre for British Political Life.