In India in a Warming World: Integrating Climate Change and Development, Navroz K. Dubash brings together contributors to reflect on climate change and development debates in India, discussing India’s climate vulnerability, the impact of climate policies on long-term development and India’s global engagement through foreign policy. Readers will close the book appreciating the need for societal cooperation to ensure a harmonious approach to development and environmental conservation that achieves equity among different needs, writes Gayathri D. Naik. 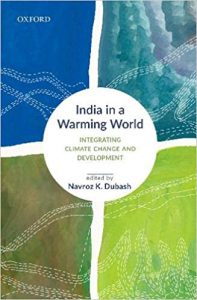 The multifarious impacts of climate change have already hit the globe, with countries like small island states most vulnerable to threats to their existence. Climate change discussions and debates divide countries into ‘developed’ and ‘developing’, but the impacts have not spared any single country yet. Multilateral discussion forums and domestic initiatives have tried to address this global challenge, engaging different stakeholders, but the perspectives and approaches of the Global North and South still vary, stalling holistic solutions. The Paris Agreement of 2015 has been able to bring together almost the entire world with a more bottom-up approach where individual nations enjoy choice over their Nationally Determined Contribution (NDC), tuned to both their development needs and global targets. However, the US decision to withdraw from this global agreement will have severe repercussions for climate change negotiations, adaptations and mitigation plans, considering its emission history as well as its financial contributions to global climate change research.

A developing country such as India is simultaneously the victim of climate change impacts as well as an active contributor to international negotiations since the adoption of the United Nations Framework Convention on Climate Change (UNFCCC) in 1992. India in a Warming World: Integrating Climate Change and Development, edited by Navroz K. Dubash, foregrounds climate change and development debates in India through a network of arguments, concerns and the voices of actors from science, development, policy, civil society, law and technology. Comprised of 29 chapters, this edited collection is a follow-up to a previous volume compiled by the editor, Handbook on Climate Change and India, which examined the climate change discussions and scenarios up until 2012.

The development concerns of addressing poverty and ensuring basic services to its citizens, along with its negligible contributions to historic emissions, have hitherto driven India’s engagements in climate negotiations. Dubash chooses a pragmatic approach to address this when he highlights the climate vulnerability of the country, the impact of climate-oriented policies on long-term development strategies and global engagement through foreign policy to stress the need for a more proactive Indian role in these debates. This active engagement is required to consider India a ‘responsible global nation’ that is regarded not only as ‘part of the solution but also seen to be a part of the solution’ among the global community.

Each section of this book provides different perspectives and dimensions of understanding climate change and is very relevant to a first-time reader on the issue. It offers a compendium of topics, beginning with an analysis of the impacts of climate change in India, followed by international debates and negotiations with a focus on the role played by India, politics, policy and ends, with an examination of the interactions between climate and development, thereby taking the reader through different spheres of knowledge on climate change. Dubash’s decision to begin the book with the impacts of climate change eases the complexity of understanding this, and the reader also receives first-hand knowledge from the three chapters in this section regarding the evidence of climate change from daily weather patterns in India.

The contributing authors in this part of the collection examine the science of climate change and its impacts in India and caution on the gravity of these impacts due to population density, rainfall variability and the vulnerability of several sections of the population. Though some extreme weather changes could be attributed to climate change, incorrect attribution through incorrect information could have serious implications on long term-oriented policy strategies to address climate change. This section also provides the reader with the perception of local people on climate change as well as how they experience and negotiate it in their daily lives, which is a novel attempt to move away from top-down discussions on the impacts of climate change and policies.

Policy discussions on climate change at the international level typically involve a Global North-South divide on issues of responsibility, accountability, adaptation and mitigation, which is reflected throughout the section on international debates and negotiations in this volume.  Equity among nations in the attribution of responsibility for historic emissions to developed countries, the right of development for developing countries and the right to sustenance for island nations are among the most debated issues in climate change negotiations. The approach of ‘share the blame and not the responsibility’ would aggravate this global issue, resulting in intergenerational injustice when future generations are exhausted of all natural resources and left with a polluted Earth.

Following the trajectory of the development of international climate change conventions up until the binding commitments under the Paris Agreement of 2015, India’s engagement with international negotiations showcases the change in its approach to being a responsible global power intending to be part of the solution without being part of the problem. Foreign policy dynamics, a detailed roadmap to achieving consensus in Paris and the way forward, along with India’s domestic efforts in its NDC, are discussed in detail by the book’s contributing authors.

The influence of civil society organisations and the business world on policymaking at international and domestic levels are widely known. They have significant influence when it comes to decision-making over climate change too, which is discussed by contributing authors in Part Three of the book on the topic of ‘Politics’. In addition to these debates and discussions, the perspectives of and impacts on labour in the energy sector of India, primarily public and coal-based, is also included along with shifting discourses on climate change in print media.

Part Four of the book contains five chapters on policy, which focus on climate finance, technology transition, national climate policies as well as the adoption and implementation of climate policies at state levels, which are the first points of climate vulnerability. State climate action plans are foregrounded here, which have been typically been kept at the margins while national action plans, policies and attempts have reigned in scholarly discussions. State action plans also matter when each state in the country is unique and experiences its own weather and climate problems.

As in the title of the volume, the interaction of climate and development is the theme of the book’s final section. In my opinion, this is the most dynamic and vibrant part of the book as it leads the reader through the impacts of climate change on significant sectors that influence development, such as energy, water, forests, biodiversity and agriculture. Urban areas, coastal zones and islands are more threatened by weather and climate change due to urban population density, the natural vulnerability of coastal and island areas along with their strategic importance. Climate change vulnerabilities in these areas and sectors could have severe ramifications for food security and the economy and therefore the whole population of India.

Of course, climate change impacts are already obvious. A holistic analysis of climate change, intertwined with science, policy, politics and development, is a valuable contribution to scholarly discussions on climate change, which are often thematic or sector-focused. Dubash has brilliantly integrated these sectors through the collaboration of scholars and experts in this volume. The book proves to be a worthwhile read for readers looking to begin by understanding the science behind climate change, and they will close the book realising the need for cooperation among various sections of society to ensure a harmonious approach to development and environmental conservation in order to achieve equity among different needs and address poverty and development challenges without compromising the rights of nature and future generations.