In Populocracy: The Tyranny of Authenticity and the Rise of Populism, Catherine Fieschi examines the rise of populist politics, arguing that a desire for authenticity has been integral to its success today, focusing on the cases of France, the Netherlands, Italy and the UK. This is a thought-provoking and innovative contribution to scholarship on populism in situating authenticity as a key part of the populist imaginary, writes Ben Margulies.

Populocracy: The Tyranny of Authenticity and the Rise of Populism. Catherine Fieschi. Columbia University Press. 2019. 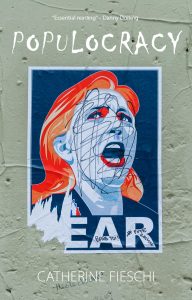 The COVID-19 pandemic has not stopped populists, or those who study them. While US President Donald Trump defies experts and political foes (and then some) from the White House Press Room, Brazil’s President Jair Bolsonaro refuses to accept pandemic control measures and championed mass marches against the other two branches of the Brazilian government. A number of articles have been published trying to assess if and how COVID-19 will affect populism, and about how populists are responding to the crisis.

The Guardian published one such piece by Catherine Fieschi, the director of the Global Policy Institute at Queen Mary, University of London. Fieschi has recently published her own book on populism, Populocracy, the product in part of more than twenty years of research into populist parties in Europe. This short book offers a new vision of populism as an ideology, and as a way of constituting and sustaining identity groups. Though quantitative scholars may have some objections, the book presents novel theoretical contributions and makes a welcome addition to the literature on the subject.

Fieschi’s focus is on populism as an ideology, which she defines as ‘a set of ideas and the ideals that hang together as a blueprint for political action’ (23). In calling populism an ‘ideology’, Fieschi stakes a position in a long-running battle over whether populism qualifies as something so comprehensive and intellectual. Benjamin Moffitt, for example, in The Global Rise of Populism, describes populism as a ‘political style’, a type of performance which is distinct from ideology. Cas Mudde and Cristobal Rovira Kaltwasser accept that populism is an ideology, but a ‘thin-centred one’ that has to form a symbiotic connection with a more developed system of thought like nationalism. On the other hand, Mattia Zullanello has observed the existence of ‘valence populist’ parties that compete purely on populist themes without an auxiliary ideology.

Fieschi firmly declares populism a self-sufficient ideology and outlines its major features. These include: a belief in a sovereign and pure people; democracy and its promise of self-government and control; a complaint that this promise has been betrayed; and, finally, a desire for authenticity. It is this last concept that is central to Fieschi’s book and marks her major contribution to populism studies.

In Fieschi’s writing, authenticity is a way of thinking, of recognising people and validating knowledge. It is, to a great extent, an epistemology, a way of deciding who counts as an authority and what information can be verified as true. Authenticity values common sense, folk mores and shared, unspoken understandings. An authentic community is bound by the ability to instantly recognise members of the in-group through their manners and common mental furniture; they can identify a suitable leader in the same way. Fieschi describes talking to Dutch people in her research:

One of the key insights from the Netherlands was just how reluctant people were to have to explain themselves […] Dialogue had come to mean, to many of the people I spoke to, bending over backwards to make themselves understandable, when they themselves had not changed (78).

Elites, on the other hand, construct intellectual systems and artificial ways of speaking, while immigrants cannot share ‘instinctual’ understanding of how to be and act. Multiculturalism requires a considered way of speaking, precisely because people lack common backgrounds. Referring again to the Netherlands, Fieschi writes: ‘All of multiculturalism’s basic tenets (that one needs to learn tolerance, that one can create institutions that can turn diversity into an asset, that language needs to be practiced carefully and used in order to respect diversity) were taken as sign of an intellectual posturing clearly at odds with common sense, but more to the point with instinct’ (79).

Fieschi also advances an innovative argument tying her concept of authenticity to the development of digital culture. For Fieschi, search engines and social media create a demand for immediate, authentic connection, in which misunderstanding and misinterpretation become impossible. Everything should be simple and transparent (partly because the hard work is carefully hidden by the tech companies that produce the hardware and software  (147) – here, it would have been interesting if Fieschi had considered whether distrust of those same tech companies might in turn fuel the anti-elitist aspects of populism). The ostensible simplicity produces ‘a disdain for, and suspicion of, complexity’ (148) and demands for instant, transparent solutions. Since these are impossible, populism usually fails, creating ever more frustration – which is met with more populist responses.

Fieschi’s authenticity paradigm also allows her to suggest an explanation for why populist leaders lie so often, and why they get away with it. Lying serves several functions – it signals the people’s ambitions and desires, defies the rationality and shaming of the elites and demonstrates ‘someone who is willing to take chances in order to get elected’ (151). Most intriguingly, Fieschi argues that lying is a demonstration of a leader’s humanity and flaws, which is more authentic: ‘In this respect the populist politician can be regarded as authentic even if they are insincere and dishonest’ (151).

Fieschi devotes much of her text to four case studies which, she argues, chart the development of the populist ideology across time and space. She uses France and the Le Pens as her first example, following populism’s emergence from the rubble of fascism; then goes on to the Netherlands, where she demonstrates its embrace of authenticity and how it began to use Islam and immigration to concretise the threat to ‘the people’. After that, she studies her native Italy, as populism evolved in part as a way to deal with the stubbornness of the country’s clientelistic and ineffective governance. Finally, she concludes with Brexit Britain, tracing English/British populism in part to Thatcherism, and UKIP’s success partly to David Cameron’s decision to move away from that populist-authoritarian project upon taking the party’s leadership in 2005. Fieschi adds some personal anecdotes from her work, including some shocking, and at times hilarious, tales about the Le Pen family (including the story about the end of Jean-Marie Le Pen’s first marriage on page 48 – Pierrette Le Pen apparently left the family home with ‘Jean-Marie’s best glass eye’).

Fieschi’s work is a welcome addition to the literature. However, some will take issue with her approach. The author openly declares her preference for qualitative work, based on verbal data like interviews and party publications and on observations she has gathered in her previous research over decades. This approach is well suited for this book, which maps out concepts and the way people conceive them in their own minds. But it also means that Fieschi has yet to further test these understandings. Though she talks about understanding the populist voter, she hasn’t – to my knowledge – taken her theories, turned them into some sort of workable experiment and tested whether populist voters agree with her characterisation.

Her cases are also limited to Western Europe and mostly deal with the populist radical right (though not exclusively). Fieschi argues that left-wing populists have different ideas about the homogenous community, which imagines the people as a collective of citizens rather than an organic body (31). It is unclear whether left-wing populists can claim the same focus on authenticity if that means relying on unspoken assumptions and common sense. An examination of Latin American cases might demonstrate that left-wing populism could rely on these cultural markers and understandings too, given the sharp distinctions between the elites and the masses there (see Pierre Ostiguy’s discussion of the high and low, which describes the culturally ‘low’ register of populism in a way similar to Fieschi’s concept of ‘authenticity’).

Fieschi does attempt to suggest some solutions to the conundrum of populism, but this section is brief and undeveloped. She talks about creating new forums that allow for both pluralism (the enemy of populism, where there is only one truth and identity) and for authenticity (164). She notes that French President Emmanuel Macron’s national debate, opened in the face of the gilets jaunes, had some success (162). In any case, such propositions must face the active opposition of those already committed to populism: as Fieschi notes, the populists’ goal is to create their exclusionary community, not join in a new plural one (162-63).

These quibbles aside, Fieschi’s work is accessible, thought-provoking and innovative. Her concept of authenticity provides an intriguing, and quite likely valid, way of describing the populist imaginary. I look forward to seeing more research (qualitative or quantitative) demonstrating how the public understands ‘authenticity’, and how it influences political behaviour.

Image Credit: Nigel Farage backstage at BBC Radio 4’s Any Questions in Hurstpierpoint on 5 May 2017 (Steve Bowbrick CC BY 2.0).