In Dispossession without Development: Land Grabs in Neoliberal India, Michael Levien examines how the shift from state-directed capitalism to neoliberalism in India from the 1990s has led to a new regime of dispossession, in which land becomes ‘for the market’ rather than ‘for production’ and rural residents lose their land and livelihoods. Using the case study of Rajpura to evidence the consequences of Rajasthan’s transition to a ‘land broker state’, this rich, theoretically engaged book is sure to remain at the centre of academic discussions of development, dispossession, resistance and neoliberalism, writes Nikhil Deb. 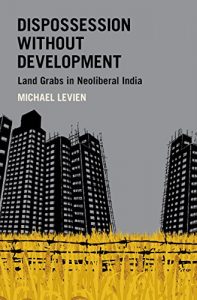 In Dispossession without Development, Michael Levien expertly demonstrates how the ‘shift from state-directed capitalism to neoliberalism in the early 1990s led to the genesis of a new regime of dispossession’ (32) in India. This regime, as Levien argues, can be characterised as one of ‘land for the market’ instead of ‘for production’ as the Indian government dispossesses people and uses or sells the land for non-labour-intensive purposes. Such a shift brings about the question of whether dispossession of land by the government is predatory or beneficial for the nation’s development as the discrepancy between the farmer’s compensation and the market appreciation of the land is astounding. Levien’s theoretical engagement with classic to contemporary scholars and his employment of ethnographic insight exhibit a powerful example of the ways in which the global and the local can be integrated into a sociological analysis.

Of the two types of dispossession in postcolonial India, developmental and neoliberal, Levien argues that the driving causes of land dispossession changed dramatically during the latter regime. During the developmental period, India dispossessed people of their land for public projects. However, as the economy started to become more liberalised, creating a new level of demand for privately owned rural land from the 1990s onwards, the pressure of competition within the state and the temptation of legal and illegal rents provided the government with incentives to start dispossessing land for any reason that could be thought of. The neoliberal regime of dispossession reached its peak in the mid-2000s with Special Economic Zones (SEZs), which were effectively governed by private corporations, and became integral to the neoliberal Indian state (47-48).

Government dispossession of land in India increased after the end of colonialism, despite a cry for more significant social reform in Congress (33). This government seizing of public land is legally permissible under the Land Acquisition Act of 1894, which was passed during British rule to take private lands by force for public purposes (34). After its independence in 1947, India set on the path for development. Eventually, it undertook the Nehruvian model, which deepened the colonial legacy by perpetuating the exploitation of land and adding profit to private organisations without resettling the dispossessed or underprivileged.

Development dams — ‘the paradigmatic form of state-led development and potent symbols of national progress’ (35) — were the largest source of dispossession in postcolonial India. People were asked, as India’s first Prime Minister Jawaharlal Nehru told the oustees of one dam, to ‘sacrifice for the nation’ (42). However, as bad as this was, at least more of the land was for public use rather than private (43). In the early 1990s, with the neoliberal reckoning, demand for private land grew exponentially. Post-liberalisation growth was fuelled by Information Technology (IT) and Business Process Outsourcing (BPO), along with Major Multinational Corporations (MNC) like American Express, British Airways and General Electric.

After offering a concise account of the context of dispossession and the major theories of dispossession in the introductory chapter, in Chapter Two Levien discusses in depth how the shift from state developmentalism to neoliberalism in India dramatically changed the Rajasthan state government (a northwestern Indian state) into ‘a land broker state’. The chapter begins with an emotion-evoking story of a man, Mohanlal Saini, who had lost his land due to dispossession for the Mahindra World City (MWC), which was the ‘first and largest private SEZ to be built in Rajasthan’ (31). The local government confiscated around 3,000 acres of land to give to the MWC, which would then sell portions of the land ‘to private companies and build high-end residential and commercial real estate’ (31).

In Chapter Three, the author outlines in a ‘historical perspective the agrarian milieu of Rajpura’ (63), a village in the modern state of Rajasthan that is referenced throughout the book. Rajpura was a monsoon-dependent village with a population reliant on diverse farming. A combination of the strict caste system and political suppression, before and during British colonisation, rendered people in Rajpura without a historical tradition of fighting for themselves and collectively organising uprisings or protests. Therefore, it was easy for the Indian government to set up a SEZ in 2005 and take advantage of the land without much resistance.

To elaborate further on the village’s history, through almost half of the twentieth century, Rajpura operated under a feudal caste system with a hereditary monarchy guiding central power over the region. Many villages of Rajasthan, including Rajpura, utilised the jaghirdari system of land management to guide the hereditary passage of land, furthering the inequities of the caste system from generation to generation. Until 1947, Rajpura’s political system centred on exploiting the peasant class of the caste system to extract grain and labour (64). Following the colonial era, the new government’s attempts at equitable land distribution failed, largely reinstating the prior power dynamics. For example, the scheduled caste (‘untouchables’) made up about 35 per cent of the population in Rajpura, yet owned just 15 per cent of the land.

Women, in particular, faced unjust treatment and lacked equal rights in Rajpura as women carried the burden for reproductive, household, agricultural and nonagricultural work, yet were unable, in most cases, to own land. These inequities are exacerbated by the existing class and caste divides within Rajpura society, which installed ‘a deeply patriarchal system of landownership and pattern of social relations’ (80). 29 per cent of women in Rajpura are literate (74) compared to 59 per cent of men (and 46 per cent of rural woman in India), and a strict gender-based division of labour is perpetuated in agriculture and other sectors, while women receive few benefits despite their substantial agricultural labour and unrecognised reproductive labour (76).

Local leaders came from the castes which previously held money and power, establishing policies and systems to hold on to both despite an independent India. Being a mostly unequal agrarian society, the people of Rajasthan lacked ‘a strong history of political mobilization’, which partially facilitated the concentration of power in the hands of a few (79). Finally, the combination of Rajpura’s lack of history concerning peasant insurgency and its vastly unequal agrarian structure resulted in ‘Big Men Politics’ (local politics being undertaken by powerful men), which served as an additional factor in setting the ideal stage for the arrival of the SEZ.

In Chapter Four, Levien details the effect of the Rajasthan government agreeing to transform Rajpura into a SEZ. This chapter highlights how the government came up with a scheme to make land prices go up, enticing ‘indebted lower-caste farmers’ (82) to sell their land. As they did so, the Rajpura government then sold it to the MWC. The Rajasthan government systematically took over the land in Rajpura by first offering settlements and compensation land plots to the farmers, eventually using the police to dispossess the residents forcibly.

The chapter divides the actions taken into three phases: compliance; accumulation; and disaccumulation. Compliance relates to the first step needed to create the MWC, offering farmers the option to sell their land for compensation in order to ‘soften opposition’ and ‘buy consent’ (83). This shifted the action of accumulating land from a transaction between the people and the state broadly to one between individual landowners and the market. However, this process often left farmers with less than their land was worth, and disproportionately affected people of lower caste and lower socioeconomic status. Thus, the next stage was turning this land, previously used for agriculture, into the ideal industrial MWC. Though the SEZs were intended to promote manufacturing, the MWC quickly became a centre for the IT industry to flourish, enjoying tax breaks and other benefits. Also, the MWC developed ‘lifestyle zones’ in order to facilitate consumption by middle-class and white-collar workers. Instead of focusing on labour-intensive industries to create more jobs, the MWC was disproportionately inhabited by the ‘knowledge economy’ (Chapter Six), which left many working people without a place in the new market.

Chapter Four also details that the farmers who previously inhabited the area and lived off subsistence farming lost their land and livelihood, as well as ‘intangible forms of social wealth’ (96). Furthermore, the area has now lost arable land and livestock and is currently experiencing water shortages and contamination. Rajpura’s farmers, as the author elaborates in the following chapters, lacked the necessary social and cultural capital for inclusion in the industry dominated by technological knowledge. Those who were illiterate were harmed the most by the dispossession of land, although these people were promised education in order to keep them working and financially stable once the MWC had been completed. In other words, the people of Rajpura were promised jobs and training, and the government failed them.

Levien uses the case study of Rajpura to effectively establish that India’s transition from a development state to a land broker one for private industry was made possible by state agencies. Instrumental in this transition was the large-scale dispossession of rural Indians, a practice that increased significantly as India continued to liberalise throughout the 2000s. Statistics alone can make these changes appear like development on the whole, but what these fail to capture is how any process in which millions of people lose their homes and face far worse conditions than what is commonly considered impoverished can be beneficial to a country. Although the book’s historical context is South Asia, it has significant implications for multiple disciplines and other societies in the Global South. Dispossession without Development has already sparked discussion, and due to its rich empirical relevance and profound theoretical engagement, it is sure to remain at the centre of academic dialogues concerning development, dispossession, resistance and neoliberalism.