In Conflict and Transnational Crime: Borders, Bullets and Business in Southeast Asia, Florian Weigand explores the links between armed conflict and transnational crime by focusing on four conflict-affected border areas in Southeast Asia. The book offers a cogent and compelling study of both the connections and disconnections between crime and conflict in Southeast Asia, writes Alessandro Ford, encouraging readers to recognise how binaries of state and organised crime, licit and illicit, can obscure complex phenomena. 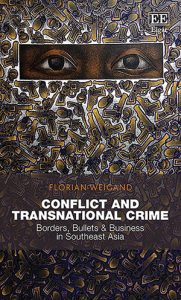 A favoured truism of any twenty-first-century war scholar is that ‘conflict has changed’. Since the supposedly history-ending fall of the Soviet Bloc, wars have become about dollars, not doctrine. Conflicts have transformed from military engagements to be won into ‘mutual enterprises’ to be prolonged while both sides feed off the lucrative war economy. Clearly this isn’t always the case, but it often is. One intellectual response has been surging interest in the so-called ‘crime-conflict nexus’: the idea that conflict and organised crime increasingly intersect and benefit one another, with the line between criminals and insurgents becoming blurred.

This discourse was reinforced by the post-9/11 construction of the ‘narco-terrorist’, a hypocritical and imprecise concept. The Taliban, ISIS, the FARC, Myanmar’s UWSA: the list of political armed groups accused of being apolitical criminal bands is extensive, but in most cases (perhaps excepting ISIS), more nuance is needed. Likewise, conflict zones, particularly borderlands, are widely portrayed as undeveloped, ‘ungoverned spaces’ where chaos and criminal insurgencies abound, a narrative that presents a dual solution of statebuilding and macroeconomic growth. Combined with the alleged criminal/insurgent amalgamation, this creates a rigid framework that strictly divides ‘centre’ and ‘borderland’, state and criminal enterprise, legal and illegal. Yet neither these intellectual demarcations nor their territorial analogues correspond to the realities on the ground in Southeast Asia.

This is the essence of Florian Weigand’s new book, Conflict and Transnational Crime: that so many of our political, economic and territorial distinctions are incoherent and in need of revision. Weigand analyses four conflict-affected border areas: the Thailand-Malaysia border, the Myanmar-China border, the Myanmar-Bangladesh border and the (maritime) Indonesia-Philippines-Malaysia border. In each one, he investigates how different forms of smuggling in the area interact with the armed conflict, be it licit (petrol, rice, coffee) or illicit goods (drugs, arms, people).

In Thailand’s Deep South, an indigenous low-level Islamic insurgency that dates back to the 1960s continues, bolstered by cultural and economic marginalisation as well as by the harassment of the local community by the 50,000 Thai soldiers stationed there. In northern Myanmar, a series of tenuous ceasefires contain violence between the country’s powerful ethnic-minority armed groups and Myanmar’s government forces (and paramilitaries) in what is the world’s longest ongoing civil war. In western Myanmar, detention camps and burnt out villages testify to the government’s ethnic cleansing of Rohingya Muslims that began in 2017, which is estimated to have killed over 6,000 Rohingya and forced another 700,000 to flee to Bangladesh. In the vast Sulu-Celebes Seas between Indonesia, Malaysia and the Philippines, Islamist armed groups operate, some as political entities seeking greater self-determination and others as financially motivated criminal bands. In each of these areas, large-scale smuggling of licit and illicit products takes place.

Such smuggling constitutes a lucrative revenue stream to any conflict-involved party, funnelling millions into war chests. But who really benefits? The dominant narrative within the ‘crime-conflict nexus’ claims it is non-state armed groups – after all, they are already illegal enterprises that require smuggled arms and supplies to operate. Not so, writes Weigand. For though these entities may have a strong incentive to smuggle (being often without alternative funding via taxes or foreign donors), they often lack both the ability and desire to do so, since they possess limited territorial control and can suffer loss of local legitimacy by engaging in certain forms of crime. In fact, it is states who benefit most from smuggling, both through individual and systemic corruption. State authorities are also ideal partners for any smuggling network: they control territory and, given their broader base, are unconcerned about alienating a segment of the local population through their criminal acts.

Nor do smugglers particularly benefit from conflict, at least not in the ways assumed. Conflict zones actually make for terrible economic corridors: production of illicit goods tends to be disrupted, transport infrastructure is damaged and there is the constant threat of poorly aimed shells. Even in conflict zones where illicit production or smuggling does take place, it overwhelmingly occurs in calmer areas. Rather, conflict is useful to smugglers and states alike because it makes it ‘easier to hide both institutional involvement of states within the smuggling economy and corruption within the state apparatus’ (40). It also reduces the state’s level of public accountability, thereby offering opportunities for corruption on a much larger scale, as well as camouflaging the use of criminal violence against activists and journalists. Such collusion should not be surprising. The very idea of ‘smuggling’ requires the nation state and is defined in opposition to it: without fixed borders, ‘smuggling’ would just be ‘trade’.

In a way, of course, it is trade. In many parts of the world, ‘smuggling’ is the traditional way of doing business across arbitrary borders ‘drawn by colonial powers through closely connected communities’ (130). Smuggling should not, therefore, be seen as some shadowy, corrosive phenomenon, but as an important part of the global economy. Smugglers follow market demand and structure their businesses much like legal companies, as entrepreneurs and enterprises that seek to make a profit. How professionalised and organised smuggling networks become depends on state policy. The ‘hard borders’ of the US and European Union (EU) have professionalised human smuggling/trafficking, placing it in the hands of organised crime. The porous ‘soft borders’ of Southeast Asia have not and so people smuggling remains small-scale and loosely organised there. The same cannot be said for the drug trade, however, which in Southeast Asia, the US and the EU has been heavily criminalised, leading to its monopolisation by transnational organised crime.

Conflict and Transnational Crime is a cogent and compelling study of both the connections and disconnections between crime and conflict in Southeast Asia. It forcefully carves through the standard rhetoric of ‘narco-terrorists’ and ‘militia-mafias’ to offer a vital dissection of state involvement in illicit markets. In doing so, it laudably manages to instigate conclusions with global implications while remaining firmly tethered to its regional context. It also lays another brick in the road to recognising how binaries of state and organised crime, licit and illicit, merely obscure complex phenomena: among them, ‘the crimes committed by state authorities’ (138).

This perhaps constitutes the book’s main omission: that it rarely gives names or provides specific evidence for state collusion. Rather, Weigand focuses on theory over practice and on general references to ‘army-owned companies’ over detailed exposé. However, for an academic book, this is entirely understandable – Weigand is not an investigative journalist. In a sense, therefore, Conflict and Transnational Crime raises as many questions as it answers, presenting an open-ended challenge to activists, journalists and judicial authorities. For them, the path to contesting corruption, collusion and the alleged ‘crime-conflict nexus’ is underpinned by works like this one.