In Automating Finance: Infrastructures, Engineers and the Making of Electronic Markets, Juan Pablo Pardo-Guerra offers a new examination of how stock exchanges have been automated through an incremental process, focusing on the infrastructural objects and work involved in the computerisation of the stock exchange in the UK and the US. This theoretically and empirically multilayered book will be particularly relevant for researchers and students of economic sociology as well as finance professionals, though its contributions travel beyond this with tremendous implications for multiple fields, writes M Kerem Coban. 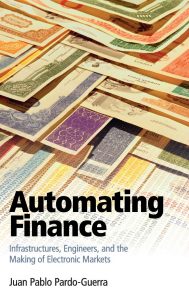 It was in 2008 when I visited the Istanbul Stock Exchange that I was taken to the ‘old’ trading floor where brokers used to fill a board while trading stocks. I was told that phone calls, quarrels and shouts were the defining features of the trading floor. I remember vividly what a former broker told me that day: ‘The early years of the exchange were fantastic. We were paid high, enjoyed long breaks, and there was more fun in our business.’

While reading Automating Finance, I recalled the memories of that visit, as author Juan Pablo Pardo-Guerra examines how stock exchanges have been automated through an incremental, conflict-driven process, focusing on the computerisation of the stock exchange in the UK and the US. Pardo-Guerra asserts that ‘the market’ is not only about transactions. It also includes ‘the infrastructural objects and forms of work that constitute communities of transactions and exchange’ (11). Automating Finance is therefore concerned with ‘the production of market infrastructures and their role in transforming finance [… with an] emphasis on the material, situated marketplace’ (13, emphasis in original).

Market engineers, technologists, infrastructural workers and technical entrepreneurs – or the ‘band of brothers’, given the unequal, often gendered characteristics of this ‘technology constituency’ – are the main drivers behind technological breakthroughs in the financialised world. Pardo-Guerra sheds light on how Peter Bennett, Michael Waller-Bridge, Steven Wilson and George Hayter revolutionised trading in Britain with Tradepoint by setting up a cross-border computerised trading floor. In addition, Pardo-Guerra studies automation in the US through an examination of Frederick Nymeyer’s innovations and the introduction of the National Market System, which automated financial transactions and, most importantly, united a fragmented web of stock exchanges across the country.

Throughout the book, interviews with these technical entrepreneurs greatly inform the reader: not only do we learn how they imagined the infrastructure, but also the political struggles they grappled with and the ideational background of automation. For example, in an interview, Waller-Bridge noted that ‘we [Bennett, Waller-Bridge and Wilson] generated […] the idea that there should be cost effective infrastructure on a pan-European basis […] I coordinated the joint venture negotiations [with 12 European Community stock exchanges…] and, with London’s blessing’ (184). However, the so-called Price and Information Project for Europe (PIPE) failed, given incumbents’ resistance to regional integration. Once PIPE failed, the trio left the London Stock Exchange (LSE) and established a consultancy firm with ‘a plan to [show that a] European-wide infrastructure could work’ (187). Tradepoint emerged out of this, challenging the infrastructure at the LSE but establishing a breakthrough in the quest for automation in financial markets.

From a policy perspective, we can define these technical entrepreneurs as the drivers of transformation in stock exchanges, those who ‘foster technological innovation by positioning the technology as addressing the societal need(s)’ (Nihit Goyal and Michael Howlett, 2018, 2). Technical entrepreneurs – in other words, technology innovators – engage in ‘research and development; technological invention; nurturing; shielding and empowering novel technologies; tying a technology narrative with a socio-political agenda’ (Goyal, Howlett and Namrata Chindarkar, 2019, Table 1).

What Automating Finance reveals is that the activities and tactics that are used to develop and diffuse novel technologies benefit a lot from ‘invisibility’. Technical entrepreneurs are positioned in an ‘invisible’ position given their role in the organisation working on the improvement and development of the technological infrastructure of the stock exchange. They have sought faster, more efficient technological infrastructures, and their attempts at materialising these have led to the internationalisation of novel technologies, turning brokers into ‘push button devotees’ (97).

Technical entrepreneurs in the UK and the US were successful in the diffusion of novel technology by forming alliances. Perhaps more importantly, computerisation was enabled by technical entrepreneurs who developed a myth of efficiency, anonymity in trading and imagined ‘moralised’, ‘fair markets’, operating with a charisma that stemmed from the esoteric nature of the infrastructure. Through this, technical entrepreneurs created the narrative and therefore the imaginaries of what was possible. The narrative characterised commitments to honour and the understanding of a community (i.e. kinship) through the use of the novel technology as an instrument of partnership, not only through the trading floor crowd but also queues on trading books.

Summarising such a theoretically and empirically multilayered book is a difficult task. Automating Finance draws our attention to various important implications that can equip readers with questions for further research. Firstly, the book is informative in showing how ordinary technicians working in ‘ignored’ silos of stock exchanges developed novel technologies for trading and settlement, and how their technologies later transformed the nature of trading and settlement in financial markets.

More notably, read alongside Johannes Petry’s (2020) piece on the structural power of a few stock exchanges, Automating Finance illuminates the role of collective actors in global financial markets. We could argue that the initial steps in automation through the establishment of Tradepoint and the National Market System provided a structural leverage to the LSE and the Nasdaq, compared to other major stock exchanges. This suggests that incremental technological advancements led by several technical entrepreneurs across the Atlantic and in Europe paved the way for domination within the global web of stock exchanges.

This outcome calls our attention to two implications of (the politics of) automation. First, Pardo-Guerra reveals the resources and skills of technical entrepreneurs while also discussing the organisational and structural factors that enabled the politics of technological innovation. Second, technical entrepreneurs may not have imagined what might have arisen from the first versions of automation in financial markets with the transformation of crowded, cacophonous trading floors to ‘crowdless’ queues.

When we read about the history of automation across the Atlantic, one of the most significant implications of automation relates to the institutionalisation of artificially constructed and computerised social and economic exchange in the stock market. Here, we can define institutions as ‘regulative, normative, and cultural-cognitive elements that, together with associated activities and resources, provide stability and meaning to social life’ (W. Richard Scott, 2014, 56, emphasis in original). Automated infrastructure, as Pardo-Guerra demonstrates, led to the emergence of norms such as the first-in, first-out, regulatory rules to ‘democratise finance’, and the transformation of the infrastructure of social ties, evolving from the trading floor to electronic order books.

Following Peter Berger and Thomas Luckmann’s (1967) theory of institutionalisation, it is fair to claim that automation initially produces the infrastructure for shared meanings and interaction (externalisation), which is followed by users coming to see automation as something ‘out there’ (objectification), thanks to the charisma and myths of automation diffused by technical entrepreneurs and the favourable approach of regulatory authorities. Finally, the infrastructure is internalised with actors becoming ‘addicts of push buttons’. From this moment onwards, automation gets institutionalised. Over the long term, actors cannot avoid the infrastructure but develop it incrementally. This has led to today’s ultra-speed trading to which we are socialised. Our imaginary is so occupied by automation that once the infrastructure fails, we worry about reputation in the world of financial centres. This was experienced most vividly in Singapore in 2014 when a lightning bolt lasting 0.1 seconds triggered a three-hour trading shutdown in the Singapore Exchange.

All in all, Pardo-Guerra achieves the difficult task of covering a vast literature to trace a detailed history of automation in financial markets in the US and the UK, which indeed shaped the ‘imagined futures’ of automated infrastructure from the 1960s onwards. The only neglected structural and institutional factors are financialisation and the internationalisation of the banking sector and capital flows, which increased dependence on automated infrastructure to manage the rise in trading in stock exchanges. The book could also be read with a reference to the ‘financialisation of everyday life’ , if we consider how automation ‘made the market more legitimate to the public at large, so argued its advocates, allowing for even small, working class investors to trade through the august systems of the stock exchange’ (77).

Automating Finance is relevant for researchers and students of economic sociology, but its contributions travel beyond this with tremendous implications for other fields, including management, organisational sociology, public administration and public policy. Finance professionals would also enjoy the book, as they could learn how technical entrepreneurs manoeuvred through institutional, structural and organisational dynamics in automating finance.

M Kerem Coban is an Assistant Professor in the Department of Political Science and Public Administration, Kadir Has University. He completed a PhD in Public Policy at the Lee Kuan Yew School of Public Policy, National University of Singapore in end-2017. His research interests lie at the intersection of comparative public policy, regulatory governance, and international political economy. You can find more information here: https://mkeremcoban.weebly.com/.

Posted In: Britain and Ireland | Economics | Science and Tech | USA and Canada