In African Europeans: An Untold History, Olivette Otele offers a new history that celebrates the lives of African Europeans through tracing a long African European heritage, drawing connections across time and space and debunking persistent myths. This is a thrilling and informative read, writes Michelle M. Wright, and will prove an excellent introduction for both scholars and lay readers who are relatively new to exploring the histories of this ancient, diverse and growing presence. 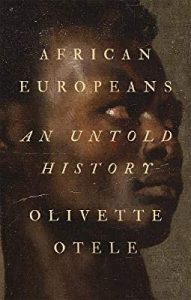 Professor Olivette Otele’s African Europeans: An Untold History joins a rather rarified collection of books on Blackness in Europe. One of the earliest I know of, Guyanese-born Professor Ivan Van Sertima’s 1985 African Presence in Early Europe, remains influential in the field of Black Studies, although it is largely unknown outside of it, a fate all too common with books that underscore the Black presence in Europe before there was such a concept as ‘Blackness’, much less ‘Europe’.

To my knowledge, there are only a few more, also largely unknown. US scholar Allison Blakely, an art historian, has contributed two volumes, Blacks in the Dutch World and Russia and the Negro, and, in a nod to British contributions, Cambridge University Press published Thomas F. Earle and Kate J.P. Lowe’s rather handsome anthology, Black Africans in Renaissance Europe, in 2005. From there the offerings become ever more expansive in scope, with Encyclopedia of Blacks in European History and Culture (two volumes), and Stefan Goodwin’s rather breathtakingly encompassing two-volume Africa in Europe: Antiquity into the Age of Global Exploration and Interdependencies, Relocations and Globalization.

Otele’s focus, however, on the Classical world up through the nineteenth century, has been gaining greater traction with recent archaeological discoveries in Britain, which in turn have inspired a host of BBC documentaries, such as David Olusoga’s Black and British: A Forgotten History and Akinola Davies’s Black to Life: Rethinking the Black Presence within British History. Even so, Wikipedia still avers that the first record of a Black person in London was in 1593: ‘his name was Cornelius’, the entry tersely informs us.

This scholarship is notable because it typically requires the mastery of more than two languages (usually many more, extending into the Classical era), and a relatively in-depth knowledge of British and European histories (so that one may locate and accurately define the person in question). Training in archival research and a willingness to travel down some epistemological and etymological rabbit holes is also an important skill set because ‘Blackness’ is an identity of shifting definitions and understandings, especially when one charges into Early Modern Europe and earlier. 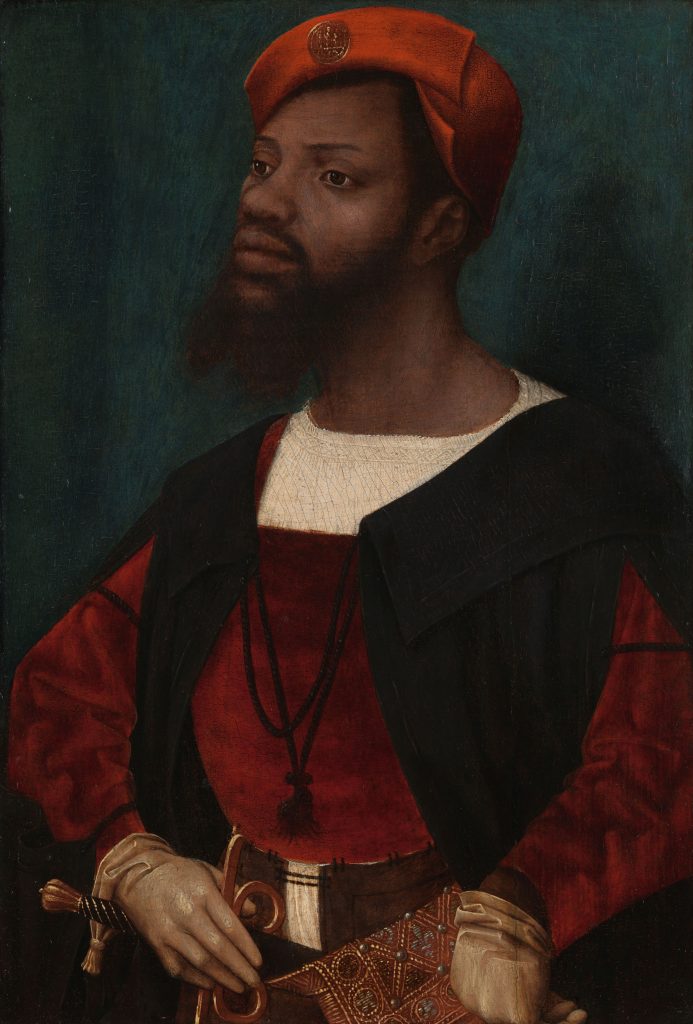 Image Credit: ‘Portrait of an African Man’ by Jan Jansz Mostaert, c. 1525 – c. 1530. The Rijksmuseum states that ‘this is the only known portrait of a black man in early European painting’. Image is courtesy of The Rijksmuseum (Public Domain), which provides further information about the portrait on their website.

As Goodwin argues in Africa in Europe, ‘Race, though real in the form of an array of social constructs, almost never has the biological significance that we so often ascribe to it’.  Having noted earlier that ‘It is important that we avoid thinking of [Europe and Europeans] in an essentialist way as something more than human-made constructs’ (xv), his introduction very nearly deconstructs this book’s title.

Otele’s ‘Introduction’ to African Europeans doesn’t see the category of race as one demanding philosophical musing in the book. ‘Linked to these notions [of citizenship and human rights] is a notion of identity that depends on variances across time and space in other notions such as race, heritage and culture. As a result,’ she explains, ‘the terminology employed in this book varies too. It will use and quote terms such as Africans, Negroes, African Americans, African Europeans, mixed race, dual heritage, and so on, not as interchangeable and atemporal categories but as words that have significance in particular places and at specific times in history’ (7-8).

Rather than warning against misreading Blackness as a biological category, Otele is more concerned that too much of our scholarship has engaged itself with exceptional individuals rather than the collective actions and beliefs of Black Africans and peoples of African descent, especially when it comes to resistance. Exceptionalism, she argues, is an unfortunate keystone of (white) European thinking on the role of Blacks in the West that deploys the relative uniqueness of the Black presence and Black achievement to marginalise its significance. By contrast, ‘The aims of this volume are to understand connections across time and space, to debunk persistent myths, and to revive and celebrate the lives of African Europeans’ (8).

Indeed, the driving force of African Europeans is to provide a history that would satisfy contemporary Pan-Africanists, if not Afrocentric scholars. Throughout, whether they be Kushite queens of the Classical era meeting their Roman equivalents on the battlefield, or mixed race enslaved Spanish playwrights like Juan Latino, these ‘African Europeans’ first push for the right to exist and human rights — and then push for racial equality. By the time we reach the Atlantic slave trade — about halfway through the book — Otele has consolidated her argument: that being Black in the West has always been a significant struggle, whether in the fight for human suffrage or more specifically combatting the European-born malaise of anti-Black racism.

Unquestionably, as this volume makes clear, Olivette Otele is a formidable scholar. Trained at the Sorbonne, with a thesis on ‘Mémoire et Politique’, which looked at Bristol’s role in the Atlantic slave trade, Otele is now Professor of History of Slavery at Bristol University and the Vice-President of the Royal Historical Society as well as the Chair for Bristol’s Race Equality Commission. She is also the first Black woman to be made Professor of History in the United Kingdom, a rather sobering fact that encourages one both to celebrate her achievement and despair at the length of time it has taken for Black scholars to be recognised for their work.

While much of Otele’s book overlaps with Goodwin’s two volumes, especially those histories from the Ancient World up to the Atlantic slave trade, there are some notable differences. While Goodwin’s Africa in Europe is considerably larger and more informative, Otele’s African Europeans delves into lesser-known stories, such as those of the Signare women of nineteenth-century Senegal, as well as an impressively diverse account of twentieth-century Black Europe: Sweden, Italy, Germany, The Netherlands, Spain and Greece, as well as the UK, are all here. Otele also pays much closer attention to the work and impact of Black European women, something Goodwin, Van Sertima or Blakely cannot claim.

By the last chapter, the narrative becomes breathless, and the reader is effectively provided with lists of facts in narrative form. At this point, Otele’s book moves from a focus on collective politics, broadening its analysis on the meaning of Black Europe by giving increased attention to individual accomplishments of notable figures. One interesting paucity in all of this plenty is the very brief mention of the term ‘Afropean’, despite Otele’s frequent use of many other monikers. After all, ‘Afropean’ is rapidly gaining currency amongst activists, artists and academics on the European continent, and is already the preferred term for networks in Spain, France and, increasingly, Germany.

This lack of usage may or may not be tied to the way in which Afropean is increasingly deployed as a term to distinguish Black European histories, cultures and politics from US Black and Black African narratives. As I have written elsewhere, US scholars working on diaspora can be prone to imposing their own political norms and histories on other collectives; Afropean thinkers such as Johny Pitts (whom Otele does mention along with his book, Afropean) and Peggy Piesche and Fatima El-Tayeb (whose work can be found in several anthologies over the past few decades, including 2005’s Mythen, Masken und Subjekte, 2012’s Euer Schweigen schüzt euch nicht: Audre Lorde und die Schwarze Frauenbewegung in Deutschland [Your Silence Does Not Protect You: Audre Lorde and the Black Woman’s Movement in Germany] and El-Tayeb’s 2011 monograph, European Others) have all taken pains to move against these projections. With the increased interest in Black European Studies, one hopes that these distinctions will become de rigueur.

Nonetheless, African Europeans is a thrilling, informative read, and an excellent introduction for scholars and lay readers who are relatively new to this ancient, diverse and growing presence.

Michelle M. Wright is the Longstreet Professor of English at Emory University in Atlanta, Georgia, where she teaches courses in African American, Black British and Black European literature and theory. She is the author of Becoming Black: Creating Identity in the African Diaspora (Duke UP, 2004) and Physics of Blackness: Beyond the Middle Passage Epistemology (UMN Press, 2015). She is currently at work on Afroeuropolis: Black World-Making in the Quantum Age, which looks at how Black writers across the Diaspora have constructed the space of Europe.

Posted In: Africa and the Middle East | Britain and Ireland | Europe and Neighbourhoods | History