In The Coloniality of Asylum: Mobility, Autonomy and Solidarity in the Wake of Europe’s Refugee Crisis, Fiorenza Picozza offers a new ethnographic study of autonomous border struggles in Hamburg, Germany, looking at how ‘the coloniality of asylum’ not only permeates the European border regime, but can also shape the various solidarity initiatives that seek to contest and trangress it. With the aim of contributing to ‘an anticolonial political imagination that can sustain daily struggles against the asylum regime’, this book is a politically committed, empirically and theoretically rich account that raises the question of who exactly is the subject of refugee solidarity in Europe, finds Helen Mackreath.

The Coloniality of Asylum: Mobility, Autonomy and Solidarity in the Wake of Europe’s Refugee Crisis. Fiorenza Picozza. Rowman and Littlefield. 2021. 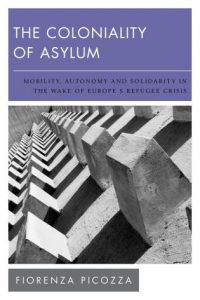 In solidarity with whom?

The slogan ‘Solidarity is not a crime’ has been circulated widely by activists and human rights organisations across Europe in recent years in response to legal prosecutions and municipal decrees against citizens who have provided logistical and humanitarian support to transiting migrants. The public criminalisation of the acts of individuals (predominantly white) and collectives is occurring alongside the continuation of black and brown individuals being packed onto death-trap boats, indefinitely stuck in flammable camps or detention centres; the criminalisation of non-white solidarity along different legal parameters (usually as smugglers); and the obscuring of self-organised migrant struggles within or on the borders of Europe.

‘The ‘‘criminalisation of solidarity’’ partly represented a re-politicisation of humanitarianism,’ Fiorenza Picozza writes in her new book, The Coloniality of Asylum. ‘Yet, by recentering white subjects at the core of [European] border contestations, they also unwittingly invisibilise refugee struggles and reproduced a particular politics of race’ (128). ‘Blackness’, argued Frantz Fanon, is an objectified result of colonial domination – as is ‘whiteness’. So too, Picozza argues, is the figure of the ‘refugee’ produced politically, legally and socially by ‘Europe’, while the construction of ‘refugees’ in turn produces the identity of ‘Europeanness’ in codes that are racial. These codes are ‘rooted in specific postcolonial, postwar and postmodern spatiotemporalities, which render Europeans actors of hospitality and solidarity, in charge of rescuing refugees when the state abandons, or actively oppresses, them’ (xxiii).

In The Coloniality of Asylum, Picozza takes the productive lenses of ‘whiteness’ and ‘coloniality’ to frame an ethnographic account of autonomous border struggles in Hamburg, Germany, in 2015 and 2016, the months immediately following the so-called ‘long summer of migration’. The book not only critiques the European asylum and border regime but also the various initiatives aligned along a continuum of ‘solidarity’ that claim to contest and transgress it. While Picozza defines solidarity as ‘an ethics and politics of care’ (xxvi), she notes its roots in ‘the political left, as well as Christian morality and welfarism’, describing it as ‘a very contested term, appropriated and elaborated in different ways’. She details the struggles of collective groups and individual refugees – friends, fellow activists and acquaintances – and their fragmented trajectories, conveying the tangle of the asylum regime through a web of locations, stories and conflicts. Her aim is to ‘contribute to an anticolonial political imagination that can sustain daily struggles against the asylum regime’, and she calls for alertness to how ‘colonially and racially-coded notions of freedom and fugitivity percolate into [solidarity] interventions’ (xxvi).

Picozza’s own critical intervention stakes the question of who is allowed to be political, and under what terms. It tests the possibilities and limits encountered by horizontal and radical practices of solidarity – confronted by tangled webs of liberal (racialised) exclusions and inclusions and the blurring of boundaries between solidarity and humanitarianism in the face of overwhelming material need and political, legal, economic, racial and social inequalities. These are also questions of how to build material solidarity without falling back onto fixed categorisations of class, gender, race or nationality; and how to disentangle coloniality without tacitly re-privileging the (racialised) liberal individual as the subject of rights.

‘The racial is the single most important ethico-juridical concept in the global present,’ writes Denise Ferreira da Silva (2016). ‘Coloniality figures in all shapes of capital.’ Taking ‘coloniality’ (defined as colonial sedimentations rearticulated in legal and social relations) as a starting point for her line of inquiry, Picozza dissects the ‘production’ of the refugee through European policies and discourses. This figure is produced ‘politically through neoliberal extractivism and warfare in other countries; legally, through a visa regime that gives little possibility for most nationals of African and Asian countries to access the EU beyond submitting an asylum claim; and socially through practices of management and humanitarian assistance’.

Instances of solidarity ‘unwittingly share colonial premises’, Picozza argues, ‘in reproducing processes of socialisation of refugees as refugees‘ (xxiii). This includes the positioning of refugees differently (materially and socially) in relation to capital, time and leisure – in which “‘Europeanness’’ is assumed as a site of privilege, normalcy, mobility, leisure and freedom, and ‘‘refugeeness’’ as a site of oppression, disruption, immobility and unfreedom’ (133). This ‘coloniality of being’, as Picozza terms it, denies refugees the ability to possess the same ‘cosmopolitanism’ as European citizens at a socio-cultural level and ‘risks naturalising refugee oppression as something ontological and not politically produced’ (150).

If solidarity is a recognition of ‘common differences’ (Mohanty, 2003) and an ‘awareness of being governed by the same mechanisms of precaritisation and exploitation’ (Tazzioli, 2018), then the ‘flattening’ of the dense fabric of refugee lives, desires and imaginations in racialised, gendered and classed terms ‘reduces them to objects of the management and support of others’ (xxiv). This denies the possibility of establishing a common ground.

On the other hand, the erasure in discourses about migrants/refugees of the ‘racialised international division of labour, capital and mobility and the postcolonial relationship that tie European citizens to non-European ‘‘refugees’” (8) conditions European spaces as those of ‘innocent hospitality’. This overlooks the material and political conditions of migrant mobility and facilitates, in Picozza’s words, a ‘spectacle of solidarity’, whereby the ‘politics of suffering translates into an already racialised politics of Othering’ (13).

It is within this uneasy space of contradictions that Picozza situates her reflections – taking migrant grassroots solidarity as a site of both struggle and potential. It holds critical possibilities for autonomy yet may obscure the reproduction (in daily interactions, if not in direct political strategy) of tired hierarchies. This is not a deterministic or normative account; Picozza rather attempts to test the limits of various boundaries (imposed by the state, by European activists and by refugees) which emerge in the practice of solidarity.

The asylum regime manifests itself in a ‘hybrid-terrain of different entities’ (88), not just in outsourcing much of the responsibility for refugee welfare and protection to self-organised volunteers, but also in the rhetoric of some of those volunteers which ‘establishes responsibility between them and the state, and reproduces a symbiotic discourse of the ‘‘nation’’ and the ‘‘people’’’ (53). Picozza includes in her ethnographic study a refugee support group, an anti-racist legal consultation project and a no-border alliance, while state offices and refugee camps are witnessed through the gaze of self-organised refugee and non-refugee activists, volunteers, social workers and lawyers. She describes how social workers and lawyers can ‘move in-between navigation, cooption and sabotage’ of state policies, while refugees themselves ‘can, at times, imbricate themselves in state discourses and practices of subordination of refugee newcomers’ (88), creating a situation in which ‘particular individuals simultaneously occupy diverse positions’.

The subjectivity of ‘refugeeness’, the ‘socio-political and existential condition marked by thresholds of becoming and ceasing to be refugees’ (108), is a complex and shifting constellation of power relations and cultural scripts intersecting with individuals’ sense of agency and self. Middle-class and educated individuals find themselves re-categorised as racialised dependents within the European asylum system, trapped in a choice between their own autonomy and the protection offered by a legal asylum status. But the ability to navigate the material reality of everyday life, in which temporariness and precarity become protracted experiences, is ‘unevenly distributed along classed, racialised and gendered lines and intersects with legal status, educational background and social networks’.

This emphasis on the importance of class in shaping the form and strategies of resistance to the ‘coloniality of being’ prompts the question of why anti-capitalist politics are not given greater space for analysis within the book, alongside the proclaimed anti-racist positions of autonomous border initiatives that Picozza includes in her ethnography. Picozza does mention anti-capitalist perspectives in her observation that ‘Eurocentric conceptions of anticapitalism, anti-racism, queer feminism, environmentalism and ethical consumption’ (135) create a dominance of the ‘value system of ‘‘whites’’’ (Fadaee, 2015), which are also ‘structures of socialisation’ (135) towards refugees. But analysing how anti-capitalist initiatives, which give equal weight to shared precarity under capitalism in their strategies of migrant solidarity, differ or overlap with more narrowly anti-racist or no-border perspectives is not expanded upon in great depth. Analysing whether the different positioning that activists ascribe to migrants in relation to capital alters the ways in which they are racialised may be a productive angle – as Paul Gilroy (1990) warned in relation to the UK, anti-racist movements are vulnerable to mirroring the definitions of ‘race’ they oppose if they focus on a moralistic and identity-based perspective which disregards history, politics and material structures.

Europe (specifically Germany) is the book’s focus, taking into consideration how its particular colonial genealogies are reproduced in the ‘right to asylum’, both through its ‘Others’ and its imagined ‘self’. However, it is an obvious but important point, which Picozza also makes, that Europe is not unique in its admittance of refugees nor its production of ‘refugeeness’. This should raise the possibility of conversations with other geographical, political and historical contexts – most immediately, the impact that the externalisation of the EU border regime has had in the regulation and contestation of asylum in different locations (see Fırat Genç (2017) for an analysis of the challenges which faced a migrant solidarity network in Istanbul, for example).

Nevertheless, this is a politically committed, empirically and theoretically rich account, which situates refugees within a ‘differential, racialised and classed distribution of the freedom of movement’. Picozza convincingly argues that this represents the continued ‘coloniality of the law and being’ – provoking the question of who is the subject of refugee solidarity in Europe. 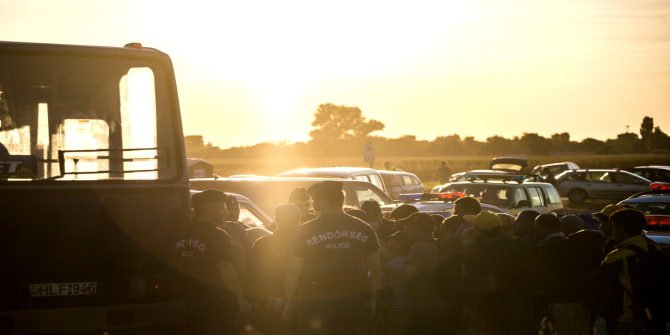