In The Death of Asylum: Hidden Geographies of the Enforcement Archipelago, Alison Mountz explores how the proliferation and normalisation of the island as a site of enforcement and detention is threatening the right to asylum. Drawing on field trips to Italy’s Lampedusa Island, Australia’s Christmas Island and the US territories of Guam and Saipan to show how the enforcement archipelago is resulting in ‘the slow death of asylum’, this book is a critical contribution to current debates on how geography is used by state actors to protect their interests, writes Rémy-Paulin Twahirwa.

The Death of Asylum: Hidden Geographies of the Enforcement Archipelago. Alison Mountz. University of Minnesota Press. 2020. 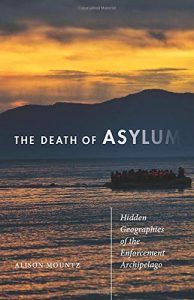 Last October, the Guardian revealed that the UK Prime Minister’s office was assessing the possibility of detaining asylum seekers in Moldova, Morocco and Papua New Guinea. Aiming to strengthen the ‘hostile environment policy’ after Brexit, documents consulted by the Guardian show that Downing Street asked the Foreign Office to examine if the UK could follow the Australian model of detaining asylum seekers offshore.

In fact, in the last decade, Australia has been criticised notably by the UK ­­for its harsh and inhumane immigration detention system, which uses remote detention facilities on islands outside its shores. Since 2012, Australia has detained more than 4,183 people offshore, on Christmas Island, but also in foreign countries such as Papua New Guinea and Nauru. Other countries, such as Italy, Spain and the United States, also externalise their asylum-seeking process on islands such as Lampedusa, the Canary Islands and Guam. This transformation of the island from a space of transit to a space of containment – or, in other words, from a space of life to a space of death (Achille Mbembe, 2019, 99) – is at the centre of Alison Mountz’s new book, The Death of Asylum: Hidden Geographies of the Enforcement Archipelago.

The Argument, or the Multiple Deaths of Asylum

Combining data from her field trips on Italy’s Lampedusa Island, Australia’s Christmas Island and the US territories of Guam and Saipan with a diverse range of secondary sources (reports, public statements, policies, laws, etc), Mountz’s main argument can be summed up in this sentence: the proliferation and the normalisation of the island as a site of enforcement and detention is threatening the right to asylum. For the author, we are witnessing the ‘death of asylum itself’ (xi). In fact, the securitisation of migration by Western countries and the increase in ‘the strategic use of islands to detain people in search of protection from persecution – to thwart human mobility through confinement – is part of the death of asylum’ (xv).

In line with the use of ‘archipelago’ as a metaphor to discuss multiple sites of detention, Mountz argues that the ‘enforcement archipelago’ (xx) ultimately results in the ‘slow death of asylum itself’ (xx). This doesn’t mean ‘that asylum has ceased to exist but rather that it is in crisis and under threat of disappearance. This crisis is evident in law, public discourse, politics and practice’ (xxi). Mountz dates this process of externalising asylum back to the 1970s to the 2010s, noticing that with each decade (from the early stages to a decade called ‘freneticism’), Global North authorities increased these measures (Chapter One).

Drawing on Judith Butler’s work on precarious lives, Mountz highlights that asylum is experiencing three forms of death: the physical, the ontological and the political (xxi-xxii). The first refers to the count of almost 40,000 lives lost during migration since 2014. As states have increased the resources spent on limiting access to their territory through the use of enforcement practices, migrants have found themselves with fewer geographical and legal routes to claim asylum. As a result, they have increasingly resigned themselves to using more clandestine and deadly pathways. The impossibility of accessing asylum is ontological death. Finally, Mountz defines the political death of asylum as Global North citizens’ acceptance of this new carceral regime (xxi-xxii). What must be understood here is that the use of geography by states is strategic as it aims to ‘undermine access to the right accrued when a person lands on sovereign territory, including the right to seek asylum’ (7).

The Cases, or on the Compartmentalisation of the World

In her book, Mountz focuses only on the Five Eye Countries (referring to an intelligence alliance between Australia, Canada, the US, the UK and New Zealand). Mountz chooses these nations as they share information (such as fingerprint databases, biometric details, etc), but also enforcement practices (as each one learns from the others and replicates policies and practices).

Although this selection is very limited and cannot be generalised outside of the Global North, Mountz posits that the use of islands for detention is becoming a worldwide phenomenon, creating ‘a global constellation of sites and places where people and places are exploited to carry out exclusion’ (xx-xxi). For Mountz, the island is not only the new border (Chapter Two) in aiming to indicate where state sovereignty starts and ends, but it is also the new prison, as it becomes the site where migrants are detained. Ultimately, the body itself seems to mutate into an island, as Mountz concludes: ‘The person detained becomes an island within an island within an island within an island’ (127).

On the one hand, she highlights how EU countries such as Italy have institutionalised the interception of boats in the Mediterranean. In the case of Lampedusa, for example, the island has transformed from being a passage point to a site of detention (78). Italy’s respingimento (pushback) policy involves collaboration with Libya, who is responsible for intercepting migrant ships and returning them to Libyan shores. This cooperation also means that Rome, along with other European states, is ‘policing borders on Libyan soil, deporting and supporting detention there to prevent departure by sea’ (86).

On the other hand, this collaboration between Global North and Global South countries is actually a form of bribing: in the name of ‘developing’ the Global South, the West funds the construction of detention facilities and the implantation of policies and measures to intercept, detain and deport migrants before they reach the shores of the US, Canada, Australia or the EU. An example of this is the EU Emergency Trust Fund for Africa, which was agreed in 2015 and introduced as a way to address the root causes of irregular migrations and displaced persons in Africa. However, it has become an instrument to implement border security measures in Africa (such as the collection of biometrics data and investment in the creation of specialised police units).

These new trends are an important element in a planetary process that could be called the fragmentation – or what Frantz Fanon referred to as the ‘compartmentalisation’ – of the world between the wealthy, former colonial powers and the economically underdeveloped, formerly colonised nations of the World. It is as if the world is being divided by a global colour-line, a new iron curtain, erected with policies and laws, carceral facilities, shipwrecks and confined bodies or floating corpses. In fact, one must recall W. E. B. Du Bois’s warning about the twentieth century that can be applied to our times: ‘The problem of the twentieth century is the problem of the color-line, – the relation of the darker to the lighter races of men in Asia and Africa, in America and the islands of the sea’ (2007, 15).

The Antidote: What Must Be Done to Protect Life

Counterintuitively, Mountz distances herself from Giorgio Agamben’s state of exception theory. First, Mountz claims that Agamben’s conceptualisation of the ‘camp’ is unable to take into account the historical and spatial patterns of this new regime of remote detention (132). In fact, she highlights the colonial history of some of these sites. On this note, she gives the example of Guam, which has been under US rule since the Spanish War in 1898. She also discusses American control over Guantánamo. Second, she notes that Agamben’s theory does not consider how spaces of exclusion target specific racialised groups (133).

Finally, Mountz’s strongest critique, and where the last chapters lead us, is how Agamben’s analysis seems to leave out how people resist such exclusionary spaces. Mountz provides an overview of how people are fighting against the death of asylum. She argues that ‘they [activists, migrants, NGOs, etc] are countering the death of asylum with the life of activism’ (197).

In fact, migrant solidarity and border abolitionist groups, such as the UK’s SOAS Detainee Support or Canada’s Solidarity Against Borders, have been at the forefront of the fight against the expansion of these dead spaces. For these activist groups, the only way to sustain and protect life in the future is to end, once and for all, the borderisation of the world. As Mbembe wrote eloquently:

In truth the problem is neither the migrant nor the refugees nor the asylum seekers. Borders. Everything begins with them, and all paths lead back to them. They are no longer merely a line of demarcation separating distinct sovereign entities. Increasingly, they are the name used to described the organized violence that underpins both contemporary capitalism and our world order in general […] In fact, everything leads back to border – these dead spaces of non-connection which deny the very idea of a shared humanity, of a planet, the only one we have, that we share together, and to which we are linked by the ephemerality of our common condition (99).

Overall, Mountz’s book is quite accessible and undoubtedly as politically relevant to the general public as to academic circles. However, there are some limitations and minor flaws in Mountz’s analysis. For instance, in my view, the plurality of concepts and Mountz’s reference to a wide variety of authors can be quite challenging and at times unproductive. This can be observed in Mountz’s use of Avery Gordon’s conceptualisation of haunting as ‘one way in which abusive systems of power make themselves known and their impacts felt in everyday life, especially when they are supposedly over and done with, or when their oppressive nature is denied’ (cited in Mountz, 101). Mountz draws on this concept to conceptualise ‘the work done on behalf of (though not always directly by) states on islands where sovereign and biopolitical powers envelop asylum seekers’ (101). However, in this very short section, Mountz does not convincingly show how this applies to migrants’ daily experiences of detention and the concept only re-emerges in the book’s conclusion.

Nevertheless, The Death of Asylum is a critical contribution to various debates on how geography can be used by state actors to protect their specific and rivalrous interests.

Rémy-Paulin Twahirwa is a PhD Student at LSE Department of Sociology. He’s a 2020 Pierre Eliot Trudeau Foundation Scholar. Rémy’s research project focuses on immigration detention in the UK and in Canada. He currently co-editing an upcoming collective zine on postcolonial futures: https://www.blackxb.org/. You can follow him on Twitter at @remypaulint.

Posted In: Australasia and Pacific | Europe and Neighbourhoods | Law and Human Rights | USA and Canada