In The Fight Against Platform Capitalism: An Inquiry into the Global Struggles of the Gig Economy, Jamie Woodcock argues that we are witnessing the emergence of an increasingly organised and transnational movement of platform workers against capitalism. The book shines in drawing from workers’ experiences to develop an understanding of the current contours of political struggle in the platform economy, writes James Muldoon.

The Fight Against Platform Capitalism: An Inquiry into the Global Struggles of the Gig Economy. Jamie Woodcock. University of Westminster Press. 2021. 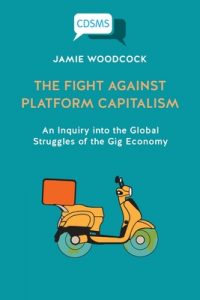 Platform labour has become a ubiquitous presence in our lives, from food delivery and ride hail apps to handywork and domestic services. Books such as Nick Srnicek’s Platform Capitalism and Shoshana Zuboff’s The Age of Surveillance Capitalism analyse recent developments in the digital economy from the perspective of the corporations, explaining the significance of new technologies, business models and modes of production. In The Fight Against Platform Capitalism, Jamie Woodcock attempts to shift the terms of this debate by drawing our attention to struggles from below and narrating the story of the rise of a transnational platform workers’ movement. By starting from workers’ own experiences, this book provides a welcome and necessary contribution to the literature and changes our perspective in how we think about platform labour.

The central ambition of the book is to overturn the commonly held view that platform workers are ‘unorganisable’ by revealing the new forms of workers’ struggle in the platform economy. Woodcock highlights the increasing connections between platform workers through WhatsApp groups and informal in-person meeting places. Beginning with Uber drivers in 2014 and the strikes of Deliveroo riders in the summer of 2016, he analyses the escalation of collective action by workers and the development of new networks of transnational solidarity.

The focus of the analysis is on three main case studies in which the author has personal research experience: transport platform workers (food delivery and ride hail); online workers (also known as ‘microworkers’); and digital freelancers. The chapter on transport platform workers is particularly well executed with an interesting account of how platform capitalism ‘involves a series of technical changes that seek to immiserate and intensify delivery work’ through externalising costs and risks on to workers. The book rewards readers with interesting first-hand accounts of protests and pickets that are typically absent from academic discussions of the digital economy.

The framework of the book leads to numerous other interesting questions that follow from its analysis. How would domestic and care workers on platforms organise given their personal relationships with their employers, more private workplaces and lack of natural gathering places in public areas? The book argues that recent struggles with Amazon Mechanical Turk show the potential for workers to co-ordinate through online communication in the absence of physical proximity in the workplace.

The book also offers an important methodological contribution to the study of work in the digital economy. ‘Researchers should not engage with work like explorers venturing into uncharted territory’, the book advises. Instead, they should recognise that workers are best placed to understand the nature of their work and to formulate strategies for how it can be transformed. Drawing on his experiences with collaborators at the journal Notes from Below and organisers at the Independent Workers Union of Great Britain, Woodcock advocates for a form of ‘digital workerism’. This draws on the tradition of workers’ inquiry, inspired by Marx and taken up by other Marxist groups, perhaps most notably Italian Marxists in the 1960s and 1970s. Workers’ inquiry is a ‘militant process’ of ‘organising and research’ which can be distinguished from other forms of co-research by its engaged and explicitly political dimension: namely, ‘how research can be part of, and contribute to, a movement against work’.

The adoption of this methodology poses an interesting question of how much of the workerist framework gets taken up in this new approach of digital workerism. The core claim of workerism was the idea that capitalist development and innovation were a reaction to workers’ struggle. It was also highly critical of existing institutions of the left and looked to militant workers for innovative strategies to fight against capital. Michael Hardt and Antonio Negri describe the ‘fundamental axiom’ of workerism as the following: ‘the struggles of the working class precede and prefigure the successive re-structurations of capital’. The idea that this could be considered an ‘axiom’ raises the question of whether this is an empirical claim subject to refutation or a political imperative – to prioritise the perspective of workers as an object of analysis and subject of political struggle.

In the case of digital workerism, we could ask whether it is compelling to understand the rise of digital platforms and app-based work as a response to the political activity of workers. The power and influence of trade unions have been in steep decline for several decades and the industries transformed by digital platforms have not witnessed large-scale strike activity immediately preceding the introduction of this new technology. While during the ‘Hot Autumn’ of strikes and demonstrations in northern Italy during the late 1960s it may have been possible to see capital as on the back foot, the case for the workerist hypothesis is more difficult to make when analysing the global tech-enabled capitalism of the past decade. Indeed, much of this book analyses workers’ first attempts to make sense of and respond to capital’s restructuring of the labour process through dubious ‘independent contractor’ schemes and new methods of algorithmic management. An alternative explanation of the rise of platform businesses might look to long-term trends in capitalist production, such as the decline in manufacturing and the rise of information technology and data as central to the creation of new lean business models.

Regardless of your answer to these questions, the book fills a large gap in our understanding of workers’ struggles in the platform economy and provides an important attempt at theorising how day-to-day conflicts between workers and management could be developed into more sustained organising. The final chapter draws on a framework developed by Arianna Tassinari and Vincenzo Maccarrone for understanding how workplace solidarity has developed among gig workers. This involves starting from the ‘sources of antagonism in the labour process’ and analysing the material factors that enable solidarity to emerge, such as shared spaces, social relations and common struggles. The common experience of platform workers can lead to the development of new networks of mutual support and collective demands.

In addition to this analytic framework, Woodcock also points to a practical example of a successful organising collective from which we can draw inspiration. He tells the story of his visit to Athens in 2019 and witnessing the organising work of the Driver Workers’ Informal Assembly (SVEOD) who organise transport platform workers. This collective, described as ‘more an anarcho-syndicalist organisation than a mainstream union’, is praised for its community organising methods of going out into the streets and having in-person discussions with riders on a few evenings each week. There are some interesting parallels here with Jane McAlevey’s book No Shortcuts and the emphasis on deep organising for building workers’ power.

It would have been interesting for the book to have further explored the relationship between these bottom-up workers’ struggles and legal challenges to workers’ status and conditions in the gig economy. The book also seemed needlessly hostile to workers forming platform co-operatives, which were described in the conclusion as a ‘shortcut’ ‘cooked up by academics’ and ‘implemented from above’ with ‘little regard for workers’ experiences or their struggle’. Despite the obvious limitations of workers’ co-operatives, they are nonetheless attempts by workers to improve their pay and conditions, which can be thought of alongside rather than in opposition to the underlying aims of this book.

Channelling Marx and Engels, the book concludes that the real value in the latest wave of struggles of platform workers is located less in their immediate material gains and more in the development of political composition and new forms of political subjectivity. Woodcock draws on a wealth of experience and important research to provide readers with interesting insight into platform labour. As the movement continues to grow, this book will prove a useful companion for anyone interested in workers’ struggles in the gig economy.