In The Filing Cabinet: A Vertical History of Information, Craig Robertson presents a history of the storage and circulation of documents in early-twentieth-century US offices, showing how the filing cabinet reconfigured office architecture, working conditions and the very definition of information. Revealing the unspooling consequences of the adoption of the filing cabinet by US business, this enjoyable and well-presented book will particularly appeal to researchers exploring media materialism, writes Sam di Bella. 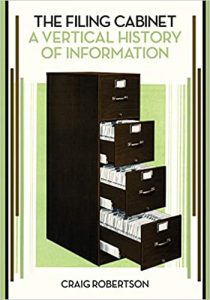 Where things go affects what they are. With its enamelled sides and partitions, the filing cabinet reconfigured office architecture, working conditions and the very definition of information. It was the vernacular expression of a new understanding of modernity and efficiency. Through The Filing Cabinet, Craig Robertson uses advertisements, management textbooks and company records to present a history of the storage and circulation of documents in early-twentieth-century US offices.

Paperwork, before the twentieth century, was circulated carefully. Even if papers concerned public matters, they had a private air about them, as the chanceries described in Cornelia Vismann’s Files and the scribal separates in Harold Love’s The Culture and Commerce of Texts will attest. And nineteenth-century office furniture reflected that. Desks with large fronts hid clerks from public view, and their many pigeonholes were stuffed based on individual preference rather than to encourage shared access.

With the triumphant arrival of modernity and scientific management, the unsightly hoarding of papers was, seemingly, on its way out. The filing cabinet and the flat-topped pedestal desk became the tools of a new information regime that prioritised speed of circulation over long-term storage. To explain the filing cabinet’s contribution to modern efficiency, Robertson divides its material qualities into three: verticality; integrity; and ‘cabinet logic’. These are the persistent promises made in modern advertising literature and management studies for the filing cabinet’s ability to disrupt the traditional office.

The first quality, verticality, is made most explicit in office equipment manufacturers’ constant comparison of the filing cabinet to the skyscraper, with its metal skeleton that supports a plated exterior. Verticality, reaching above the lowly horizon, was seen as efficient, a way to expand into unused space above. It was also, in a way, an illusion. In skyscrapers, verticality amounted to the successive stacking of discrete horizontal units. Robertson compares that design with another extremely vertical structure — the church, which is designed to make churchgoers revel in its internally exposed verticality, its open vaults and supporting columns.

Even as architects like Le Corbusier and Frank Lloyd Wright tried to minimise the impact of verticality and reclaim horizontal design, respectively, businesses looked for more ways to incorporate it into their orders of operation. Separately invented by several office ‘equipment’ companies, the filing cabinet was one answer. By compressing folders filed on their long edge, filing cabinets made their contents seem to literally stand at attention, ready to leap into the searching hands of the office clerk. The cabinet was designed to appear sanitary and easy to use in a way that would generate profits by saving time. And the cabinets’ modular nature allowed them to act as partial walls, so office layout could be customised to allow maximum light even for those working far from skyscraper windows. 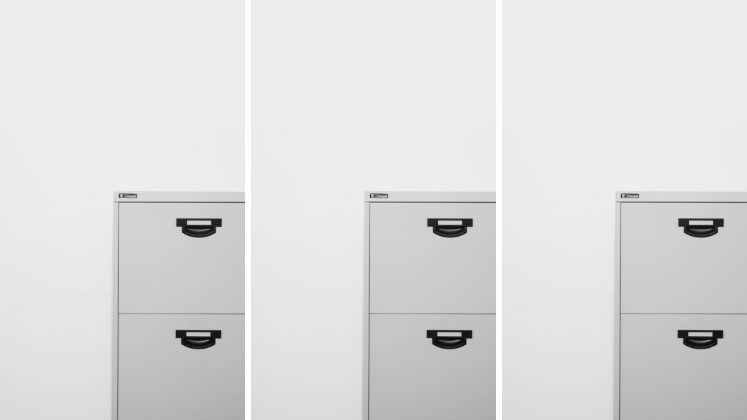 Image Credit: Adaptation of Photo by Adam Birkett on Unsplash

If the modularity of filing cabinets led to their success, so did their sturdiness and external opacity — their integrity. In addition to extracting as much out of space as possible, modern efficiency was also associated with speed, thanks to the methods of scientific management and Taylorism. The earlier formats for the long-term storage of paperwork, books, were too cumbersome to fly about at the speed of modern business. But just as stagnant piles of paper conveyed unbusinesslike sloth, the unchecked flow of paperwork spurred ‘anxiety’, as Robertson calls it, that papers would be lost or misfiled in the rush.

These early anxieties were captured in court cases about whether a binder of loose-leaf papers could actually fulfil the legal requirements of business accounting. The unbreakable ledger book promised a continuity and accountability that the binder could not. Filing cabinets partially filled that gap. The comparison to skyscrapers was called into service here as well, in silly ad illustrations of male office clerks jumping into and hanging off sliding cabinet drawers with all their might — all to turn information storage into a method of information retrieval.

The material of modern steel also played a role, as companies impugned wooden furniture by claiming they hosted insects and rodents that would damage paperwork. Insurance research methods tested the integrity of filing cabinets, showing them to be safe custodians of paperwork by subjecting them to burn tests or dropping them from great heights to prove that they could survive a building collapse.

The final key element to the filing cabinet was the sense of control and granular access they gave to users — ‘cabinet logic’, as Robertson calls it. Coming out of the historical organising system of the ‘cabinet of curiosity’, the filing cabinet promised to make information visually identifiable at a glance. In partitioning space, companies could outsource thinking and memory to the cabinet:

By segregating papers, the filing cabinet provided epistemological support to information as a specific unit. This articulation of the archive and efficiency often took the form of claims that a well-organized cabinet created information that was “alive,” in contrast to mere storage, which was characterized as “dead” or at least “dormant.”  (158)

I was most curious about the epistemic effects of filing cabinets, so I did wish that the book spoke more about cabinets of curiosities and adjacent institutions, like museums. They, and spatial techniques of memory, are outside the scope of The Filing Cabinet but felt like relevant context to explore.

The labour of clerks to follow ‘cabinet logic’ was streamlined with silent hinges, and in doing so, that work was externalised and made impersonal. The filing clerk was no longer a knowledge worker but an information worker. The files they sorted did not reflect them or their views, but fragmented data sourced from all over a company. This shift was supported by a constellation of office equipment. Tabs and visual index systems sorted index cards into alphabetical or decimal systems ‘at a glance’ while giving clerks a handle to pull files with. Manila folders, a product of US imperialism in the Philippines, structured collections of loose papers and made up for the lack of US paper standards in the early twentieth century. These tools all served the aims of ‘managerial capitalism’. With them, managers used written text to control workers as well as fuel their growing ‘documentary impulse’, as described in JoAnn Yates’s research. 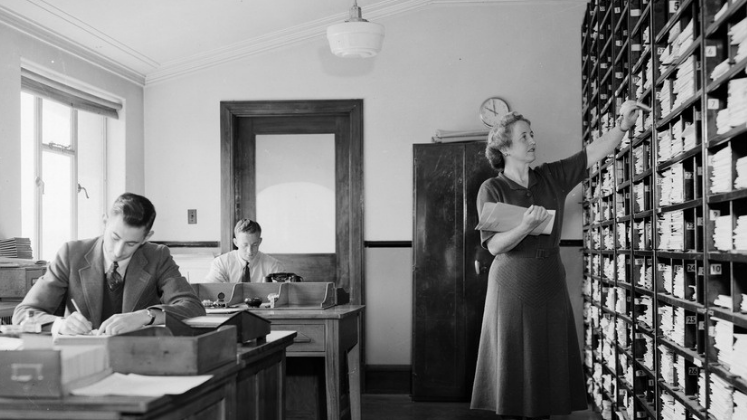 The reclassification of knowledge work to information work was not an accident, Robertson argues. Through the filing cabinet, male office workers displaced their anxiety about the changing nature of the apprentice-like position of the clerk. As more women entered the workplace, managers coded them as more suited for working with files for their ‘nimble fingers’. Male executives, meanwhile, interpreted the information in those files. These assumptions are all baked into filing cabinet advertisements of the time. In image after image, women (or disembodied feminine hands) pull files; men read them.

In the office, Robertson shows, filing was seen as labour that would discipline women out of working-class culture and into white, middle-class values:

White, Anglo-Saxon, middle-class women who worked in offices sought positions with responsibility, such as that of personal secretary or even head of a file department […] The women whose primary work involved actual filing tended to be immigrants or the American-born children of immigrants whose whiteness and middle-class identity, while more dubious, nonetheless gave them access to the office; these were the women who needed training. (197)

Robertson also documents failed attempts to turn filing into a profession; they were overshadowed by the success of organised library workers. This failure of filing to persist as a profession was partially due to the assumption that most women would work as filing clerks for only a short time and then leave work for marriage — an assumption many industries tried to exploit, as seen in Mar Hicks’s Programmed Inequality with computer programming and Alice Savoie’s recent research into UK type drawing offices.

In the last chapters, the filing cabinet also spills into the home. It, too, became a place where active storage could replace lifeless clutter. The discipline and efficiency of the workplace, enforced by the work of women, altered the designs of home furniture and even brought the filing cabinet itself home. (As I write this, I’m looking at two full-length filing cabinets secreted into a closet.) Robertson reminds us that, in the kitchen as in the office, the filing cabinet means business.

Robertson concludes The Filing Cabinet by pointing out its current role as an emblem of broken modernity. It worked to blur the past into the present with active storage; and the future into the present by encouraging forethought. But, looking to Ben Kafka’s research on the ‘demon’ of paperwork, bureaucracy is now experienced more as impediment than efficiency. Robertson points to the rise of the pile as a storage method — its simplicity and elegance compared to a burdensome filing system.

For a book that began as an intentional parody lecture on media materialism, I got the impression that its author genuinely enjoyed his research, which in turn made The Filing Cabinet all the more enjoyable to read. Robertson’s combined use of illustrations and historical documents clearly display the culture he is trying to capture. As a result, I think The Filing Cabinet would be particularly helpful for researchers who want to write about media materialism, without getting lost in the minutia of model numbers. It also establishes the conditions that led to the increasing US culture of managerial control in the 1970s and 1980s. I found myself riveted by the unspooling consequences of the adoption of the filing cabinet by US business — the manufacturing of tiny cabinets for classes at secretarial schools, the advocates of ‘filing’ clothes, the replacement of family Bibles for storing family memorabilia. With enough pressure, anything can take up more space. 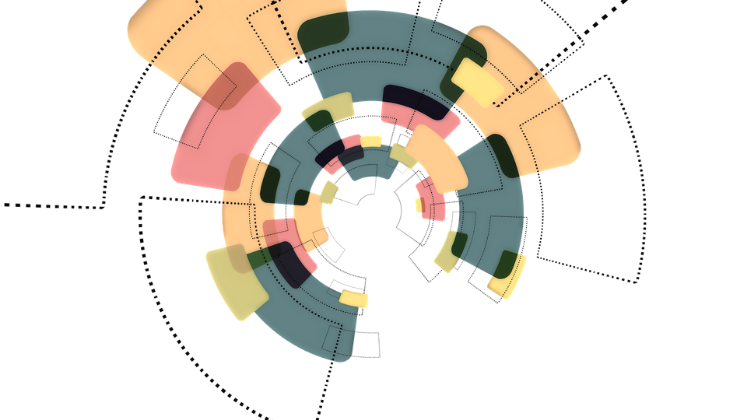