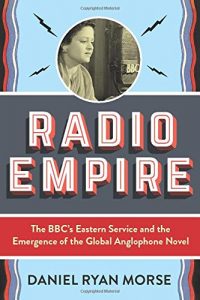 In Indian writer Mulk Raj Anand’s novel The Big Heart (1945), student leader Satyapal listens to Azad Hind Radio during the Second World War. These broadcasts by political radical Subhas Chandra Bose were trying to influence Indian ‘hearts and minds’ against British imperialism by using German radio services from 1942 onwards. On the other hand, the poet Purun Singh Bhagat, another character in the same novel, declares that the English are ‘on the side of truth against falsehood’ (1). Yet, curiously, neither Bhagat nor any others in the novel are depicted as listening to the BBC. The novel instead repurposes the official BBC viewpoint as Bhagat’s own perspective.

This distinction, astutely made by Daniel Ryan Morse in his book Radio Empire, draws our attention to the dynamic intersection between the literary and the radiogenic within a broader field of growing scholarly interest in the mid-twentieth century and its refashioning of modernist practices. Morse argues that studying radio transmissions by well-known global Anglophone writers such as Anand and lesser-known ones like Attia Hosain and Venu Chitale transforms our understanding of the literary texts they authored. In doing so, he also highlights the extent to which literary and media studies are able to ‘speak’ to each other, and how significant this mode of interpretation and analysis is for each field.

The focus of the book is the BBC’s Eastern Service, which began wartime broadcasting to India from May 1940 onwards. Although the service was at first on air for ten minutes daily, broadcasting news in Hindustani, it expanded rapidly, incorporating programmes in English, Bengali, Marathi, Sinhalese and Tamil. Consequently, its broadcasting time also increased. The English-language programmes, on which Morse focuses, were intellectual in nature, not targeted towards Indian mass appeal or for British officials stationed in India, but at university students and the English-speaking educated elite of the country.

The stellar cast of contributors to these programmes included British writers George Orwell, E. M. Forster and T. S. Eliot, along with Indian left-wing intellectuals – programme organiser Zulfiqar Ali Bokhari and authors R.K. Narayan, Ahmed Ali, M.J. Tambimuttu, G.V. Desani and Attia Hosain. In their work for the Eastern Service, these intellectuals, then, as Morse rightly notes, ‘walked a difficult line, sure of the antifascist cause but far less sanguine about Britain’s past and future treatment of India’ (13).

Radio Empire pushes against the siloed ways in which literary modernism is often studied, with writers from the Global North and those of South Asian heritage assessed separately. Here, conceptually and methodologically, Morse’s approach is fresh and ambitious: in four chapters, the book brings together both the familiar and the new – James Joyce, E.M. Forster, Mulk Raj Anand, Venu Chitale and Attia Hosain – and makes a convincing case for the importance of studying transnational literary networks forged at the BBC.

Morse’s attention to detail, in the case of each author, is sensitive and nuanced; there is rich analysis on new archival material recovered and its possibilities, sometimes surprising ones, explored through historicised close reading. The chapter on Forster foregrounds, for instance, how much we neglect when we do not consider the broadcasting life of a writer. Morse believes that ‘Forster’s modernism was not primarily between the covers of his novels: it was on the radio’ (78). Morse’s careful analysis reveals how Forster’s interest in India, lack of faith in the imperial project and belief in individual liberty aligned him very well to the Eastern Service’s propaganda mission. Nonetheless, broadcasting at the BBC also enabled Forster to support Indian writers. He discussed the writing of Anand, Ali and Narayan in his radio programme Some Books, despite some of their works being banned in wartime India for sympathising with anticolonial resistance movements.

Morse reveals a striking instance of Forster’s radicalism and humanity when he quotes from the latter’s broadcast on Bengali writer Tarashankar Bandyopadhyay’s novel Manwantar (Epoch’s End, 1945) – ‘The action of Epoch’s End takes place in Calcutta, during the tragic winter of 1942–43. Famine and squalor and profiteering, bags of rice in the godowns, while the poor starve outside…’ (100). Here, Morse tells us, Forster directly breaks a British Ministry of Information propaganda injunction by mentioning the Bengal Famine on air, which colonial authorities were trying their hardest to suppress. 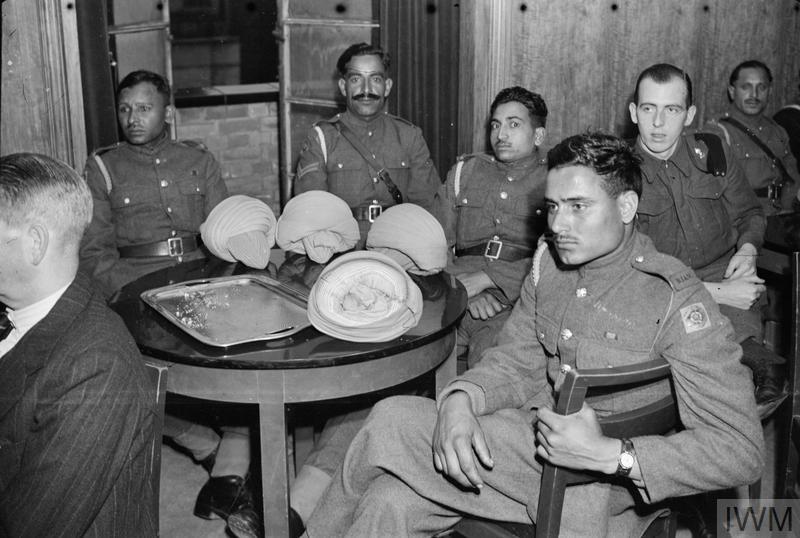 EMPIRE – AND WORLD – PARTY: RADIO BROADCAST FROM THE OVERSEAS CLUB, ST JAMES’S LONDON, 1942 (D 10369). Private Mobed Shaffi of the Royal Indian Army Service Corps (RIASC) listens to the broadcast with some of his fellow soldiers around a table in the Hall of India. Copyright: © IWM. Original Source: http://www.iwm.org.uk/collections/item/object/205199567, licensed under IWM Non-Commercial Licence.

The possibility of cross-cultural friendship and exchange, such as the fledgling relationship developing between the characters Fielding and Aziz in Forster’s novel A Passage to India (1924), was important to Forster in his radio broadcasts too. Morse foregrounds how Forster championed the reviewing of books written and published in India, seeing this as crucial to the development of English literature.

While writing about Anand, in a brilliant piece of archival recovery, Morse draws our attention to the author’s little-known play on the Bengal Famine, India Speaks: Map of India, which was staged at the Unity Theatre in London in June 1943. He quotes lines spoken by an English officer in the play – ‘But my dear Sir, look at the roads we have built, the railways, the telephones. Damn it, we have made famine impossible!’ (134) This, Morse tells us, corresponded perfectly with the position of the India Office, or the British colonial administrative centre for India, on the famine, which directly impacted the Eastern Service. The existence of famine itself was denied as well as, paradoxically, an inability to tackle the catastrophe.

Although Morse focuses more on analysing the novel The Big Heart, the chapter on Anand also shows us how the First World War becomes ‘part of Indian experience and history rather than […] a temporary crisis confined to a European stage’ (125) in both Anand’s famous ‘Lalu’ trilogy of novels and his contributions to Voice, a BBC literary magazine broadcast to India. Anand, then, pushes for a global understanding of the First World War and also relocates it within a longer timeframe, connecting it to 1940s political turbulence in India.

In an especially finely written chapter, Morse considers Hosain and Chitale’s respective mid-century novels Sunlight on a Broken Column (1961) and In Transit (1950). He takes into account the two women’s class and social background as much as their race and ethnicity, and presents them as ‘transnational feminist writers’ (161) rather than simply Indian ones. Morse argues that both writers create hybrid forms of the novel that adopt radiogenic features. In a fascinating instance of ‘media convergence’ (177), Chitale’s use of sound in her novel, he highlights, draws upon formal innovations from her BBC radio show in the 1930s on the abolition of slavery in the British Empire.

Significantly, employing such techniques enabled both Hosain and Chitale to challenge the patriarchal assumptions of nationalism in their novels. As Morse says, ‘Their placement of the personal and familial on the same level as national politics is at the heart of their feminist critique of Indian nationalism’ (156). What then constituted the home for Hosain and Chitale? How did Indian women emerge as citizens in the interwar years? And, after 1947, how much did the newly independent states of India and Pakistan deliver on their promises of gender equality? It is only by engaging in a comparative study of broadcasts and the Indian Anglophone novel, Morse persuasively argues, that we can address these questions.

In the chapter on Joyce, with which Radio Empire begins, Morse highlights how radio ‘provided a material basis for his [Joyce’s] conception of the novel’s ‘‘polylogue’’ style’ (35) and allowed the author to satirise imperial bombast. He provides us with the intriguing detail that, in October 1946, a few months before Indian independence, Joyce read from Finnegans Wake (1939) on the BBC, but this broadcast was made to India rather than England. It would have been fascinating to know more about this particular broadcast, and what listeners made of the Indian influences on Joyce’s work.

How did the end of the Second World War affect the BBC Eastern Service? The book’s epilogue examines how the BBC and the Eastern Service diminished in importance in the post-war years, allowing India’s national radio broadcaster All India Radio to become the new ‘voice’ (37) of the Anglophone novel in India. Morse observes how Salman Rushdie’s Midnight’s Children (1981) serves as its most dramatic example, with the protagonist Saleem Sinai physically transforming into radio receiver and forum for all children born at the stroke of Indian independence.

Radio Empire, then, reveals the profound nature of the impact the BBC Eastern Service had upon the printed and broadcast word, and how intertwined the relationship between the two was. The Eastern Service inspired its writer-broadcasters to undertake formal innovations in their novels, playing with techniques they learnt from the radio. Such creative experimentation changed the nature of Anglophone literary modernism itself and underscored the significance of empire to the development of writing in English. As Forster would say, only connect.

Dr Diya Gupta is Past and Present Fellow: Race, Ethnicity and Equality in History at the Royal Historical Society and the Institute for Historical Research where she works on race and equality issues in the discipline of History. Diya is writing her first book, based on her doctoral research (2015–2019) completed at the Department of English, King’s College London, where she studied Indian experiences and literature of the Second World War. In her book, alongside colonial photographs, she analyses letters, memoirs, political philosophy and literary texts in English and Indian languages to reveal the intensity and influence of Indian war emotions. 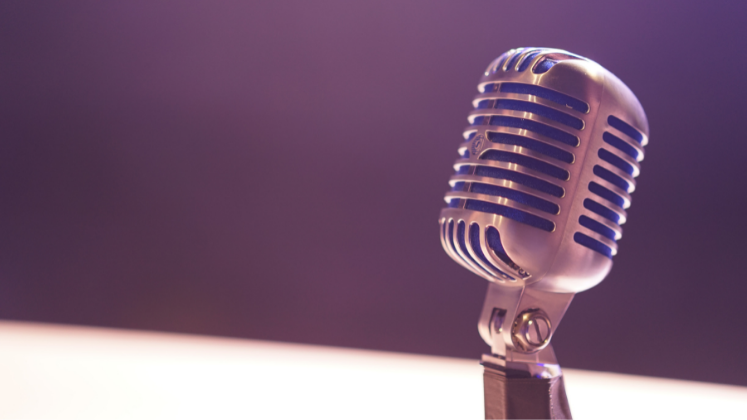 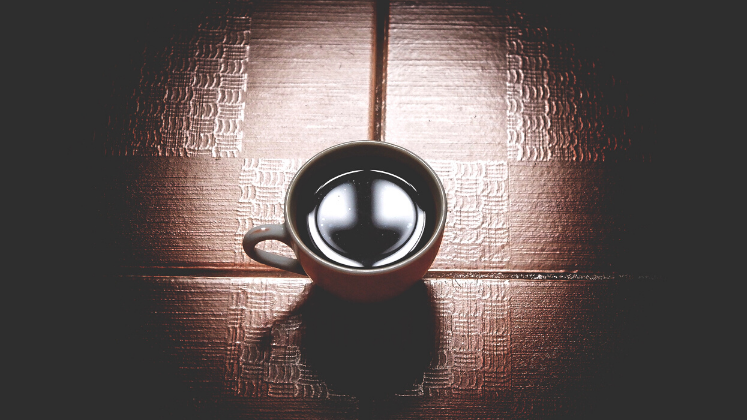