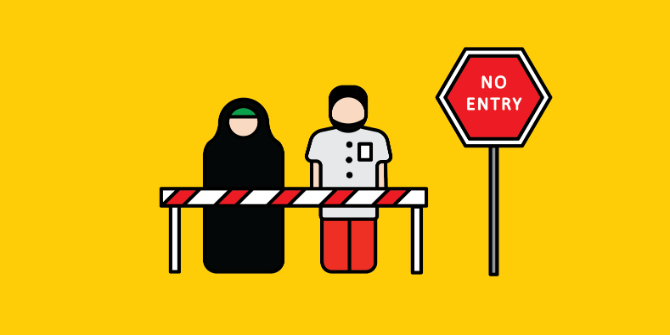 In a video released this September, Laszlo Toroczkai, the ultranationalist mayor of Ásotthalom and founder of a far-right youth movement in Hungary, published a personal “Message to illegal immigrants from Hungary” on YouTube.

With dramatic music and filming vaguely reminiscent of Putin’s manly photo-ops, he shows off his town’s fences, cameras, helicopters and tattooed pseudo-military border forces. The video ends with a helpful Google map and the reminder that “If you are an illegal immigrant and you want to get to Germany then the shortest journey from Serbia is through Croatia and Slovenia.”

Judging from the comments, this video has been viewed primarily by fellow admiring ultranationalists rather than migrants,¹ and that may have been the intended audience all along. However, Toroczkai is not alone in trying to discourage migrants via this strange form of reverse advertising: observers of the ‘EU refugee crisis’² have long pointed out that developed states are in a perverse competition to seem as unattractive to asylum-seekers and migrants as possible. In this post, I argue that these efforts to portray a state as illiberal to achieve a short term goal of avoiding the burden of housing refugees may have longer-term consequences for these states’ soft power in the international state system.

Public debate on asylum in Europe has increasingly fixated on the ‘inequitable’ distribution of asylum-seekers among European states, argues Dr. Eiko Thielemann, an LSE academic who has written much on the politics of migration.³ Policy makers look for ways to coordinate foreign and domestic policy so as to deter “bogus asylum-seekers” and address unequal asylum-seeker burdens. Domestic policies aim to create a less attractive asylum policy package: such as more restrictive refugee-recognition policies, taking away asylum-seeker’s right to work, or switching from cash benefits to voucher systems. However, Thielemann (2006) shows that many of these are ineffective: asylum seekers fleeing humanitarian disasters do not have time to research each country’s asylum-seeker policies, and even when they are aware of such policies and have the ability to choose between countries (which is rare), they prioritise a country’s economic situation and “liberal appeal” (ie its track record on adherence to human rights standards, international humanitarian crises, reception of foreigners, etc.) more than more its policy packages.

As the volume of refugees has increased with the wars in Afghanistan, Eritrea, and Syria, developed states are increasingly aware of the problem outlined by Thielemann: economic success and ‘liberal appeal’ are seen as liabilities in that they attract migrants and refugees. Many states not traditionally associated with ultranationalism have turned to publicising the restrictiveness of their asylum policy: Denmark recently placed ads in newspapers in Lebanon informing readers that it has passed legislation cutting benefits by up to 50% for newly arrived refugees. Australia went further with an online campaign, coordinated with newspaper ads, which seems to threaten asylum-seekers with drowning and detainment. This highlights how governments use cheaper communication to direct specific messages to foreign audiences, albeit usually to increase support for their foreign policies abroad, or to convince foreign nationals to invest in to travel to their countries.

Such discussions in IR usually start with Joseph Nye’s concept of ‘soft power.’ In contrast to “hard” military and economic power, soft power allows you to shape the preferences of others through attraction: some fuzzy combination of culture, political values, and foreign policies. Crucially, Nye sees it as a descriptive rather than normative concept: “Soft power is not a form of idealism or liberalism. It is simply a form of power, one way of getting desired outcomes.”† Realists naturally see this as irrelevant compared to hard power, yet figures as security-minded as the former US Secretary of Defense have proposed that the US increase soft power through “a dramatic increase in spending on the civilian instruments of national security – diplomacy, strategic communications, foreign assistance … and development.” Governments must communicate with non-state actors more directly as their significance increases: countries that have the “most access to multiple channels of communication and thus more influence over how issues are framed” are “more likely to gain soft power in an information age.”‡

Loss of soft power is generally theorized as a negative externality to another policy, such as invading another country. Loss of soft power through a conscious effort to decrease your appeal, which one might label ‘prickly power’, stands in stark contrast to this. However the framework of soft power has interesting implications here: while ad campaigns which promise detention centers, prisons, and militarized border forces are obviously a projection of power, they also undermine softer forms of power. And surely it is counterintuitive to start treating liberal appeal as a liability. As Nye documents, soft power helps states achieve their goals without resorting to expensive alternatives like coercion or payment in an enormous variety of ways. Hansen (1999) documents the way bad treatment of refugees can reduce a country’s credibility: for example, in the 1973 UK ‘migration crisis,’ British-Asians in Kenya fleeing persecution (who, legally speaking, were British citizens rather than immigrants) were denied entry due to a popular reaction against a perceived immigration wave. This “fatally undermined” the United Kingdom’s credibility in the eyes of the Commonwealth.ª Soft power should be especially important for foreign policies of states with relatively recent democracies, such as Poland, Slovakia, or the Baltics, which do not have as strong an association with liberal values as states like the UK or France. Yet these states have produced some of the loudest and most discriminatory statements about refugees and Islam.

The communications I label ‘prickly power’ may be aimed at an underprivileged, powerless community but it would be naive to assume they do not also affect the general public in nations like Pakistan and Lebanon, where Europe’s outrage at a relatively small number of refugees seems especially hypocritical. They proactively rebut moral standards towards refugees which Europeans helped set. Like any other online communication, they will stick around on the internet just as they do at the back of public consciousness, colorfully trying to convince you that these states are neither welcoming nor liberal.

When faced with an appalling humanitarian crisis, European public discussion has focused on migrants as burdens and security threats that must be deterred. This results in policy where each state tries to seem less welcoming than its neighbour and communications which try to diminish European states’ ‘liberal appeal’ or ‘soft power.’ This is dangerous short-termism which undermines Europe’s ability to build consensus in states such as Pakistan, where it is particularly important that audiences do not become increasingly disillusioned with the West. When the political discussion treats refugees as burdens which are unequally distributed, it becomes easier not to think of basic obligations towards fellow humans who have nowhere to live through no fault of their own, and who are fleeing situations so terrible we cannot fully comprehend them. The language of burdens should not predominate over the language of humanitarian crisis, where everyone needs to do what they can, rather than look at how much their neighbour is doing.