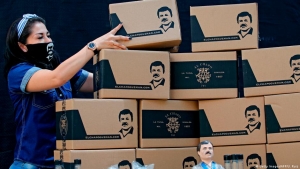 What happens when the government is incapable of taking care of its citizens during a global health outbreak? Many drug cartels have the answer. The COVID-19 pandemic has shaken the world, creating one of the largest global crises in history. In this dire and unprecedented situation, state leaders have had to come together to combat the virus’ severe effects and maintain as much stability as possible. However, in some countries, such as Mexico and Brazil, government action has been either insufficient or completely absent. This has in turn created the perfect opening for criminal organisations to step in and save the day. Consequentially, the pandemic and lack of government response toward it have augmented the influence of drug cartels in Brazil and Mexico, allowing them to obtain greater power, legitimacy, and social capital within their localities.

The battle against Mexican drug trafficking groups is one that has been ongoing for more than a decade. The cartels are the leading suppliers of cocaine, heroin, methamphetamine, and other illegal narcotics to the United States, dominating its import and distribution (CFR 2021). Over time, this drug trade has incited mass violence and human rights violations, contributing to tens of thousands of homicides every year. Though the government instituted measures over time to deal with the extreme situation, nothing has been successful in the long run. In some cases, the crackdowns have actually had the reverse effect and led to increased violence.

In 2006, Mexican President Felipe Calderon officially launched a war on drug cartels and implemented a decapitation strategy: a plan to capture or kill drug lords, proverbially cutting off the heads of the cartels (CFR 2021). While the Mexican military arrested and killed 25 of the top 37 kingpins, the strategy seemed to have done more harm than good because it created smaller and more violent organisations and a record number of more than 129,000 homicides were recorded by the end of Calderon’s term (CFR 2021). As of today, most Mexicans believe that criminals are winning the war on organised crime, not the government (Martinez-Gallardo 2012).

On March 16, 2020, the Mexican government declared a national health emergency due to Covid-19 and imposed quarantine and lockdown restrictions to combat the spread. However, the relief packages were not extended toward everyone, and many working-class people were forced to shut down their livelihoods. By April, many drug cartels used the chaos as an opportunity to exert more influence in their territories and began the distribution of “narco despensas” or food parcels, as well as the enforcement of curfews (Grillo 2020). The Gulf Cartel, for example, started distributing food, along with money, medicines, and face masks in neighbourhoods. The Jalisco New Generation and Sinaloa Cartels went a step further by imprinting products with the gangs’ logos or the faces of leaders such as Joaquin ‘El Chapo’ Guzman as symbolic propaganda (Gomez 2020). Boosted by social media, these cartels have been able to make their presence known, looking like heroes in the eyes of the communities.

A comparable situation can be observed in Brazil. It is one of the world’s most violent countries in the world, with a national homicide rate of 27.1 per 100,000 inhabitants (Miraglia 2016). The violence and crime are exacerbated by arms and drug trafficking operations orchestrated by organised crime groups and great demand created by an increase of domestic drug consumption over the past decade. Mass public outcry and the scale of drug use motivated the government and authorities to crack down on users and dealers. In 2006, a drug law was passed intending to make a clear distinction between drug consumers and dealers (Miraglia 2016). This way, people caught with small quantities would face consequences related to rehabilitation rather than imprisonment. However, the discriminatory culture within the justice system and discretion given to judges to classify offences as trafficking has led to increased imprisonment of addicts as drug pushers. While the prison system became overpopulated, it has not done much to take organised crime off the streets.

The pandemic has allowed Brazil to make headlines in the news numerous times due to what is seen as the world’s worst coronavirus response, with president Bolsonaro’s anti-social distancing campaign leading to the deaths of tens of thousands (Rich 2020). Local drug traffickers and gangs took it upon themselves to impose curfews, use loudspeakers to broadcast hygiene announcements, enforce social distancing, and go door-to-door to ensure compliance with quarantine measures (Berg and Varsori 2020). Many gangs even repurposed precursor chemicals used for drugs to make hand sanitiser. In one instance, a stolen shipment of 15,000 coronavirus tests and 2,000 units of protective equipment from an airport in São Paulo was taken by a cartel and distributed to people in need (Berg and Varsori 2020). On the one hand the gangs help to prevent the spread of the virus and are providing a key social service. On the other hand, they also maintain the socio-economic role as sole providers, and create leverage over the government, which is an extremely powerful tool.

The cases in Mexico and Brazil depict how organised crime groups function as governing bodies. They are using the states’ ineffectiveness and the pandemic to provide welfare, security, and a sense of certainty to communities as benevolent godfathers. Naturally, they are gaining support and solidarity from the people and rising in legitimacy. Though its long-term effects are uncertain, this leverage allows cartels a broader scope of power and a free hand in maintaining their illicit activities. Above all, it calls attention to the impact of poverty and inequality gaps created by the institutions.

Smith, Amy Erica, et al. “Analysis | Brazil’s President Is Rallying His Base – so That He Can Expand His Power.” The Washington Post, WP Company, 11 May 2021, https://www.washingtonpost.com/politics/2021/05/11/brazils-president-is-rallying-his-bas e-so-that-he-can-expand-his-power/.

The author, Armanya Makkar, is a final year student at the University of Maryland, College Park, Maryland.