SADL Celebration: thanks to all our ambassadors!

SADL Celebration: thanks to all our ambassadors!

The Student Ambassadors for Digital Literacy (SADL) project has involved 40 undergraduate students this year from Statistics, Social Policy, International Relations and Law. We are almost at the project end, and tomorrow afternoon have organised a celebration for everyone who has been part of the programme this year; staff and students. After that we will be starting our evaluation and impact study of SADL, to plan how we go forward in 2015-16. 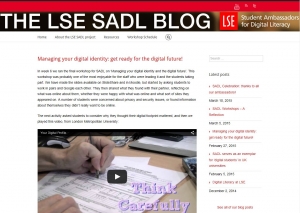 Our students attended four workshops over the course of this academic year. As part of SADL we also encouraged students to share what they were learning with each other and with peers on their course. They had a Facebook group, a Moodle course and various ways of sharing with each other, but this proved to be the hardest part of the project. The workshops we ran included:

We had two new aspects to SADL this year. Firstly, we appointed four students from the first year of the programme to act as ‘Senior Ambassadors’ to help us plan and run the workshops, and to mentor the currently cohort. The second new initiative was to divide the students into groups and set them to work on short projects. The projects are presenting tomorrow afternoon at our celebration. Each group has had a Senior Ambassador to mentor them and the topics they have researched include:

It will be great to see what the students come up with, but most of all tomorrow is a celebration and a chance to thank the students for being part of our programme.

Finally SADL is an example of what Jisc are now calling a ‘Change Agents Network‘ and I’m really proud to be taking two Senior Ambassadors, Seow Wei Chin and Eugene McGeown to the Changes Agents Network conference next week in Birmingham, where they will be joining other students from UK universities to discuss their experiences these last two years. Seow Wei wrote a great blog post earlier this week about her experiences on SADL over the last two years, and I really hope that this programme has been as aspiring for all our students.

About the Author: Geraldine Foley