On a political level Bahrain’s 2014 parliamentary elections were meaningless. Less than half of the local population voted in an ineffectual and unconvincing new parliament that continues to have no real power. Yet, its significance as a marker for the authorities in Bahrain to abandon any pretence of reform, and move directly into a security confrontation, cannot be underestimated.

The elections of last November could not have come soon enough for Bahrain’s power yielding hard-liners. For at least two years, there was a growing feeling that a key strategy of the leadership was to delay any substantive reform programme, and wait for the election to be over. Thereby using the election as a show of reform and openness to appease the international community, but without ever having to make any solid changes.

Worryingly the strategy seems to have worked, with international governments showing support for the electoral process, including the UK Ambassador visiting polling stations and the Embassy’s twitter account live tweeting throughout the day. The plan to portray the opposition as ‘rejectionists’ and rally their international allies around this notion was a clever one. For the alternative would have been an equally limited choice for the opposition, being forced to rejoin a parliament we had resigned from, yet remaining as weak as the day we left.

With the new parliament only days previously sworn in and confident from their newfound international backing, the Bahraini authorities began a fresh wave of repression in an attempt to crush dissent once and for all. For the first real time since the uprising of 2011 began our society, Al Wefaq, has come under direct attack. This began at the end of October with the announced 3-month suspension of Al Wefaq, although this was later overturned, the threat of suspension or shutting down altogether remains. At the end of 2014 Sheikh Ali Salman, Al Wefaq’s Secretary General, was arrested and will stand trial at the end of this month, whilst the Leader of Al Wefaq Shura Council, Sayed Jameel Kadhem, was sentenced to 6 months in prison for a tweet.

There is no coincidence between this aggressive targeting of Al Wefaq and the end of the elections. It is more than simply a punishment for boycotting the vote, it is the culmination of a long-term strategy to first ride-out the protests and then crush them.

Yet, it is not all plain sailing for the authorities, with the attacks on Al Wefaq stirring renewed protest. Sheikh Ali Salman is an immensely popular leader and the response from the local community has been uproar. Regular protests have taken on a fresh impetus and the people of Bahrain are refusing to be silenced.

This leaves Bahrain in a continued state of instability and what the democracy-seeking people of Bahrain have proven is that they will not stop demanding their rights until they are achieved. The 3-month period of martial law in 2011 failed to crush this movement, and any renewed attempts at repressing its way out of the crisis will prove unfruitful for Bahrain’s authorities.

The only possible path towards stability is a genuine and clear reform proposal, leading towards a real constitutional monarchy and delivered in partnership with the opposition. This needs to be understood unequivocally by all sections of the Bahraini ruling family, but also its international allies.

Getting behind a reform programme can deliver the stability for Bahrain that is so necessary in this time of upheaval across the region. Repression is not the answer and if Bahrain continues its post-election attacks on Al Wefaq, the likelihood is a perpetual crisis with no end in sight. It is never too late, though, and it must start with the immediate release of Sheikh Ali Salman and the introduction of a real political negotiation for the future of the nation.

As part of the Middle East Centre’s tenth anniversary celebrations in 2020, Ali revisited this piece – read his reflections here.

Ali Al-Aswad is a member of Al Wefaq National Islamic Society and a former MP. He resigned from parliament in February 2011, along with his 17 other colleagues in protest at the crackdown against democracy demonstrations. He left Bahrain during the period of martial law after threats were made against him. He currently resides in London, with his family, where he continues his efforts to advocate democratic change in Bahrain. He tweets at @am_aswad 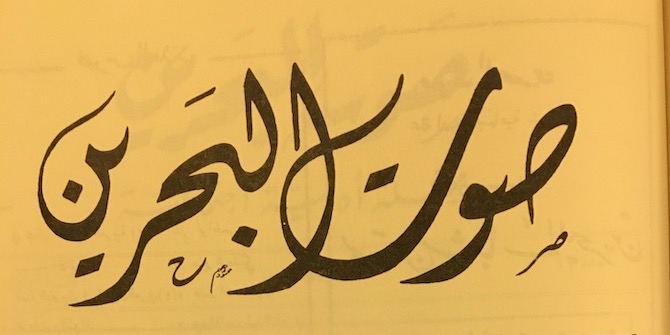 Bad Behavior has blocked 2483 access attempts in the last 7 days.