The attention paid to Libya after the so-called ‘Arab Spring’ did not result in a real and thorough development of scholarship on the country. As in the past, the scholarly interest has been mainly focused on international issues, and research on Libya in European languages is generally scant. This can be considered part of the colonial heritage and the whys and wherefores of it are rooted in the country’s historical and political trajectory. The Italian colonial occupation (1911–1943) ended because of the Second World War, and Libya’s independence (1951) was not achieved through a national struggle but thanks to a UN resolution, which unified the provinces of Cyrenaica, Tripolitania and Fezzan into a single federal state.

As a consequence of this peculiar decolonisation process, Italy lost its ties with its former colony. Thus, the old colonial knowledge did not translate into new forms of knowledge and a new generation of scholars interested in Libya did not emerge. At independence, Libya was among the poorest countries in the world and depended on foreign aid for its survival. Yet in the two decades following independence, only a few studies on Libya were published in European languages, despite the strong foreign presence in the country.

Despite ruling out any alliance with or reliance on the West, the overthrow of the monarchy in September 1969 and the emergence of Muammar Gaddafi as the ‘revolutionary leader’ drew the attention of scholars, and many works on Libya were published during this period. Most of these studies, despite their abundance, covered a very limited range of topics and dealt mainly with Libyan foreign policy and political economy, or offered general overviews of the new political system. Moreover, with very few exceptions, they were not based on fieldwork carried out in the country.

What were the reasons for this? The difficulty of obtaining entry visas to Libya, the restrictions on free movement once in the country, the lack of a cultural climate open to confrontation and discussion with foreign scholars (Libyan academics in social sciences did not enjoy autonomy or freedom of research), and the existence of taboo arguments, did not favour the development of academic studies on Libya. Moreover, the need for in-depth knowledge of the Arabic language, necessary both to communicate with the Libyan authorities and to conduct research in the country, represented a further obstacle. These obstacles became insurmountable and the country was completely inaccessible to Western scholars during the period of complete international isolation (1992–1999) caused by the UN sanctions.

The reintegration of Libya into the international community raised hopes among scholars. The regime’s need to rehabilitate its image was expressed through a more open attitude towards foreign scholars and research institutions, and the promotion of inter-university cooperation gave birth to scholar and student exchanges and joint research programmes. However, the regime’s ambiguities, the persistence of certain taboo topics, and government interference in scholarly output, in addition to the lack of a consolidated tradition of academic research, did not allow for a rapid development of scholarship.

After the euphoria of its initial moments had faded, in reality the Arab Spring did little to change the situation. Why did the fall of the regime not have a strong impact on research on Libya, and why did it not lead to a real increase of interest in the country?

Immediately after the fall of Gaddafi’s regime, until 2013, when there was hope for a positive and political democratic transition, publications on Libya thrived. However, as in the past, the focus was on the international aspects of the transition and the topics of interest were very narrow: NATO intervention, security issues and immigration, energy, terrorism, and Islamic groups.

The interest in internal dynamics mainly focused on the issue of regional conflicts. These have often been reduced in the literature to tribal conflicts, drawing on patterns and themes of colonial politics, but without mastering colonial literature. NGOS and think-tanks have produced many reports on the rise of civil society, but in most cases these studies are descriptive. It is worth noting that the revolutionary process in Libya, at least until 2013, led to a reclamation of the past by different components of society. Most relevant was the appearance of publications on the major taboo subjects of the Gaddafi period, such as the Sanussi, the monarchy, and the Berber minority. This new research raises questions of national identity, proposing a redefinition that includes the components which had been previously ignored.

In any case, today, the political instability of the country and the objective worsening of its internal security still do not permit scholars to undertake projects which require fieldwork. Thus, what can the scholar interested in Libya turn their attention to?

Topics that have already been studied, as well as well-known sources, can be investigated from new perspectives to fill gaps in knowledge.

As a historian, I believe it is worth paying attention to a period of the history of Libya which has not been scrutinised in detail: that of the monarchy (1951–1969). Why this specific period? My feeling is that an understanding of the monarchical period is crucial to understanding contemporary Libya. Many of the hot issues which trouble Libya today and undermine the transition process – such as the regional rivalries, the intertribal and interethnic conflicts – are rooted in that period. It was during Idris’ reign that the state-building process first took place, and it was in the 1960s, with the exploitation of oil, that not only the economy but Libyan society as a whole underwent a radical transformation. There is also a need to investigate this historical period: as time goes by it becomes more difficult to carry out research on the monarchy because the Gaddafi regime may have intentionally destroyed relevant documents.

Looking at this period and using almost untapped primary sources, not necessarily located in Libya, scholars and students may uncover unexplored research themes. To begin with, official census and statistics of the time – many of them also available in the LSE library – can be used to sketch out the significant effects that urbanisation had on social stratification. The Libyan press – relevant newspapers and magazines are housed in public libraries in neighbouring countries such as Tunisia and Egypt – represents another underexploited primary source that can be used to tackle the questions of modernisation, the establishment of the higher education system, and the processes of state formation. Moreover, records from the Egyptian national archives can offer other important documentation, particularly considering the strong involvement of Nasserist Egypt in the Libyan educational system.

Besides the Arabic sources, the archives of oil companies or of international agencies which gave technical aid to Libya may yield surprising treasures, and the American and British National Archives (National Archives and Records Administration, Washington, USA and The National Archives: Public Record Office, Kew, Great Britain), which have been scarcely explored regarding Libya, can provide important sources for scholars to draw on. Thus, while waiting for a restoration of political stability in the country, which will hopefully allow fieldwork to be carried out and increased academic cooperation in exploring the past, scholars can produce work which will contribute to a better understanding of the present and help to shape future research agendas.

Anna Baldinetti is Associate professor of the History and Politics of North Africa and Middle East at the University of Perugia. Her research focuses on the political history of Libya and Egypt in the nineteenth and twentieth centuries. She is the author of The Origins of the Libyan Nation (Routledge Studies in Middle Eastern History). 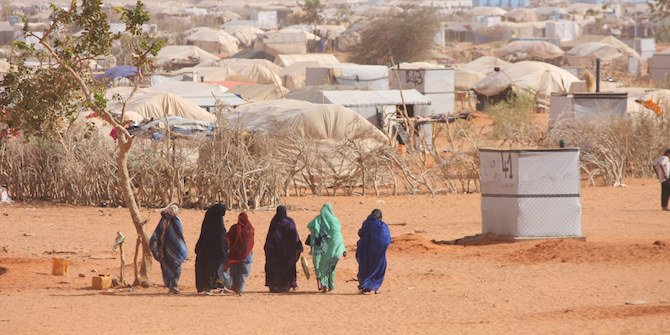